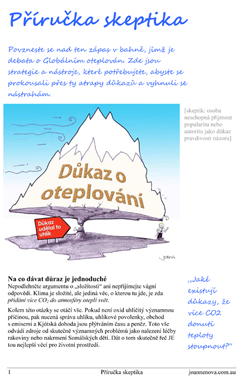 The grassroots organized effort of people motivated to volunteer to work against the big-money interests, the disinformation, and the fog of half-truths continues to grow.

Thanks to Mirek Pavlicek for his dedication and skill in translating the first Skeptics Handbook into Czech. According to the great Lubos Motl, he’s done an excellent job (which is an achievement given the irreverent colloquial nature of the booklet). Thanks again to Ralph at Kane TV for his masterful efficient turnaround of the images.

I was honored that Lubos offered to read over the translation to check it. If I’m hunting for a fast condensation of something at the leading (most confusing) edge of the science, his site has at times been the place with the insight–the savvy summary. He is one of a kind. The Reference Frame.

Mir writes that “skepticism is growing to be very cool in the Czech Republic now in spite of the fact that most people cannot cope with long and profound English texts and the Czech literature on the topic is very limited. Your publication addresses a certain gap”.

He added that the Australian debate (Glikson verses yours truly) had been noticed Czech Kosmoklub site, where a regular writer was impressed.  (See the discussion thread called “Sun and Climate” at the Kosmoklub web-site.) Shucks, that made my day. I gather it’s a site for well informed cosmonautics enthusiasts.  🙂

Lubos also recommends Klimaskeptik.cz. (And I notice they have already linked to the Czech version Příručka skeptika).

UPDATE May 29th: Mr Kremlik has added an English speaking section to Klimaskeptik. 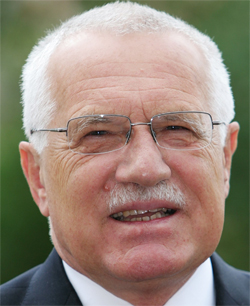 The Czech Republic is also home to Vaclav Klaus, the only leader who is brave enough to say what he thinks, and smart enough to be well informed. The economist and libertarian President has been likened to Thatcher (and as it happens he apparently keeps a photo of her in his office).

“Environmentalism is indeed a vehicle for bringing us socialist government at the global level. Again, my life in communism makes me oversensitive in this respect.”

Klaus is an outspoken skeptic and far from being savaged by the public, after 7 years in office in a recent poll he was still popular with 74% of Czechs.

If people form or find other places to discuss climate science in Czech, I’ll be happy to update this post.

UPDATE: The links were not working properly and have been fixed. Thanks Mir…

UPDATE 2: From comments below.

I will be seeking some confirmation and further information about those lists and Czech sites: Blood Donors?!

Here many contributors complimented Czech people for their inherent skepticism. It might be true for majority of the population but not for Czech water melons. The Czechs call Greens water melons as they consider them being Green on surface but Red in all the bio-mass inside. There is a lot of reason for it. E. g. now, there are two Czech Facebook groups “Antifa” and “Zelená levice” (Green Left) that contain declaration saying besides others: “Mother Earth is thirsty for blood of clero-fascistic pigs. … and her craving will be satisfied.” The site contains list of right-wing and environment disobedient publicly known people who should be hanged and burned at squares after “becoming” election victory of Green Left. Vaclav Klaus is on the list of course, too, and there is an appeal on their co-religionists for tips with other names for the list of blood donors for the thirsty Mother Earth to be gratified.

Thanks to David C for spotting the “it’s” in the title.

UPDATE 3: An improved version of the translation. Thanks to Klimaskeptik.cz. 🙂