Great news! We win. The Pandemic Emergency declaration is officially over and unvaccinated Australians are free to leave the nation.

Since Senator Rennick exposed it, and I mocked the Department of Health about how Unvaccinated Australians can’t leave Australia unless they escape, and how it was due to a WHO treaty so we could “protect the world” — things have changed. The mocking was on April 8th and 9th. Presumably the government recognized how stupid it all looked to restrict unvaccinated Australians when at least 72 nations around the world are happy to let them in, and everyone knows now, that vaccination doesn’t slow transmission. After all, the whole world caught Omicron thanks to vaccinated travellers. 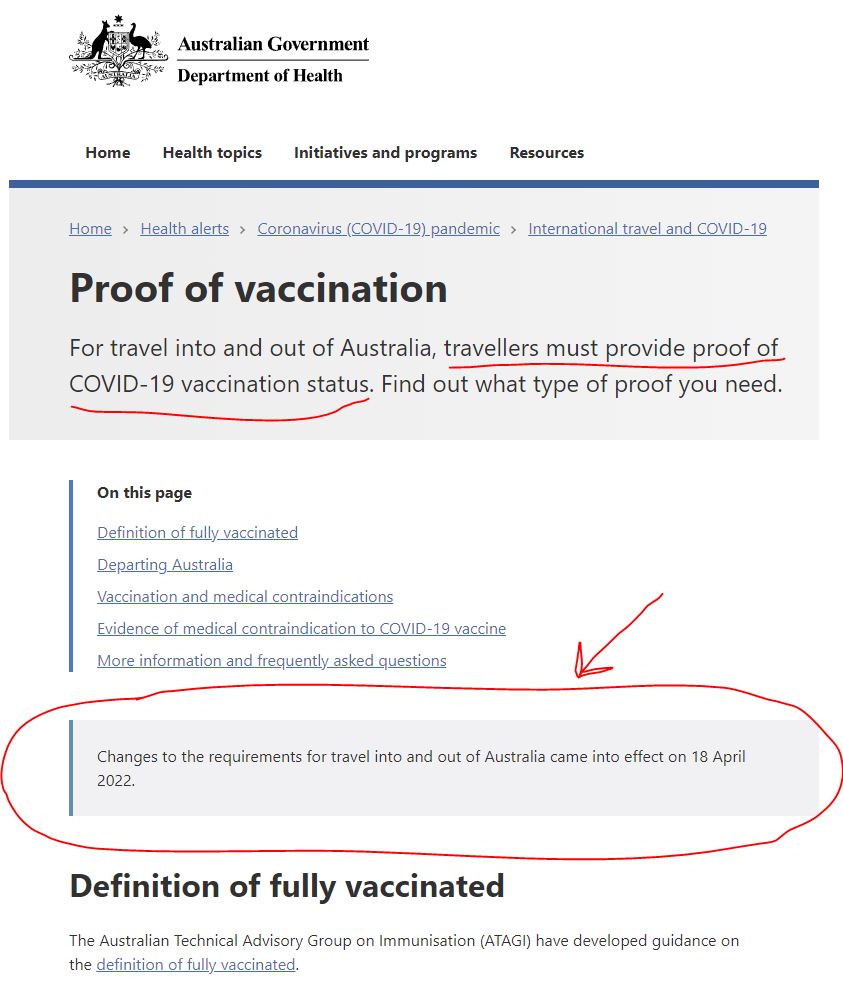 The Australian official website still tells Australians they have to have a vaccine.  Click to enlarge. | Source: Dept of Health

Two weeks ago the Chief Medical Officer even said they were dropping the emergency protocol, but still planning to make special rules to stop unvaccinated travelers leaving. It was pure mendacious petty nastiness. Luckily an election is coming and that idea has been vaporized.

What do governments do when they realize they’ve been caught with an indefensible rule, easy to ridicule — they quietly drop it. How quietly? The only Australians that might know are the ones reading Senator Rennick’s Facebook page, this site here, or the  GreekCityTimes and maybe the Herald Sun.

The Australian government is apparently still hoping to dupe Australian travellers into getting a vaccine. The illusion of mandatory requirements is everywhere.

A visit to many official Department of Health pages still tells Australians they must be vaccinated to leave. Often there are only hints they might not:

“Changes to the requirements for travel into and out of Australia came into effect on 18 April 2022.”   —  Dept of Health “Proof of Vaccination”

There’s no link there to explain what those changes are. Good luck trying to figure out what the rules are. I went hunting for a straight answer. It took hours. On another page it vaguely says:

From 18 April 2022, unvaccinated Australian citizens and permanent residents will be able to leave Australia without an individual travel exemption, but you may still be asked about your vaccination status.

And since non-Australians were always able to leave, the simple answer is that no one needs to be vaccinated to leave and 99.9% of most of the government information pages are now irrelevant to every person on Earth.  But you may still be asked by a stranger whether you took an injection. Why?

Travellers need to read the fine print, but the government seemingly wants them to mistakenly think they still must be vaccinated.

On the Outbound International Travel, updated conveniently on April 17th, the day before the rules changed, the PDF tells travellers, the government “recommends passengers departing Australia be fully vaccinated against COVID-19 and travel with proof of vaccination status documentation. Unvaccinated Australians are strongly discouraged from international travel due to the health risks.”

Officially the site says: “People who want to travel overseas must provide proof of their vaccination status if requested by a relevant official when exiting Australia.” So apparently, any border bureaucrat can still demand to know whether you are vaccinated or not, and your medical details, even though it’s not a requirement to be vaccinated. And you need “proof” of your unvaccinated status? Is there any reason at all to leave that requirement there, apart from fooling travellers that they need a vax passport? What do you do — get a certificate from your doctor to say you haven’t had the vax? How would you doctor know?

Is there any other way to describe this than deceptive, over-bearing, invasive, and misleading? For all the world, it looks like it’s designed to trick Australians.

Unvaccinated Australians can’t leave Australia — unless they escape, — is that swim, paddle or dingy?

Unvaxxed Australians can’t leave the country because of a WHO treaty: “We’re protecting the world”