Let’s play sea level bingo with the latest advertising from the Merchants of Sea-level Scares.

Hitting the media outlets tonight — the latest “Prepare to Die” news stories claim we must plan now for evacuees, refugees, inundation and homeless koalas. All the usual features of marketing are there — firstly all the images they use are from mocked up futuristic sea level rise. Secondly, it’s not a continuation of current trends, it a sudden acceleration — in this case from 1mm to year to 9mm a year, effectively starting tomorrow. 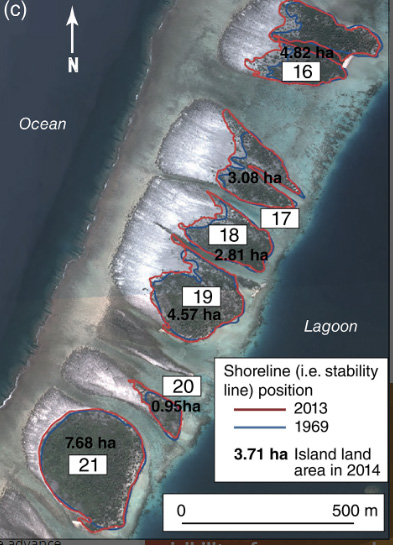 From 1969 – 2013 the seas have not changed the beaches around these Tuamotu atolls — or almost any other atoll you can name.

By every method known to man, seas are rising around 1mm a year:

All anyone needs to know about sea levels is that for the last 50 years sea levels have been rising at 1mm a year as shown by a thousand tide gauges all over the world. There was no acceleration. (Beenstock et al). Some of those gauges were rising, some falling, but when averaged out, it’s almost a wash at 1mm. Nils-Axel Morner took the opposite approach and studied 50 beaches around Scandinavia intensely, figured out which beach was at the centre of the turning crust and calculated that the seas were only rising at 0.9mm a year and for the last 125 years. (Morner, 2014).

Believe it or not, that fits with what the satellites used to say too (Morner 2004). From 1992 – 2000 the satellites recorded a rise of less than 1mm a year, but by 2003 that trend was retrospectively “adjusted” up to 2.3mm/year. As far as Morner can figure out, the satellites were calibrated to one sinking tide gauge in Hong Kong.

It also fits with the 560 odd papers that Nils has written.

Satellites are now tracking every 20m rolling sandspit above the seas — and if seas were rising the beaches would surely be shrinking. Instead of 709 islands in the Pacific and Indian oceans 89% either stayed the same or got bigger. (Duvat, 2018). Not one island large enough to have human inhabitants was getting smaller. Not one.

Most of man made warming is made by adjustments

A lot of the rise here is just the El Nino effect of 1998 in any case.

Figure 5. Annual mean sea-level changes observed by TOPEX/POSEIDON in 2000, after technical “corrections” were applied (from Menard, 2000). A slow, long-term rising trend of 1.0 mm/year was identified, but this linear trend may have been largely an artefact of the naturally-occurring El Niño Southern Oscillation event in cycles 175-200.

Figure 7. Sea-level changes after “calibration” in 2003. The satellite altimetry record from the TOPEX/POSEIDON satellites, followed by the JASON satellites. As presented by Aviso (2003), the record suddenly has a new trend representing an inferred sea-level rise of 2.3 ±0.1 mm/year. This means that the original records presented in Figs. 5-6, which showed little or no sea-level rise, must have been tilted to show a rise of as much as 2.3 mm/year. We must now ask: what is the justification for this tilting of the record?

As far as the eye can see, it has nothing to do with CO2. Fully 85% or more of all our human emissions of CO2 have been produced since World War II and nothing changed.

There are large natural forces in here that are not well understood — look at the way the rate of change of sea level has rolled in cycles in the last 200 years.

As usual, Nik Kilvert of the ABC doesn’t do any research or ask any hard questions. He’s just a distant part of the Science propaganda unit. The gloom and doom is based on highly adjusted data being fed into junk models and extrapolated beyond the error bars, but don’t expect Nik to report that. Truly terrible science needs truly terrible journalism to live on long enough to get the next grant.

From Bangladesh to the Philippines and the low-lying islands of the South Pacific, the impacts of climate change for many people around the world are going to get much worse, very soon.

Some people will become stateless, and will need to find homes in new countries, while others will need to relocate within their own borders.

Researchers writing in Science today argue that it’s time to begin preparing the retreat of people living in regions that will become uninhabitable due to climate change.

Average global sea level will rise by up to 77 centimetres by the end of the century if warming is kept to 1.5 degrees Celsius, according to IPCC predictions.

Extreme weather events, saltwater incursion and bushfires are also expected to displace people in the near future.

Trust the ABC to throw a bushfire scare into a sea level story.

Small changes in sea-level rise,
Should not come as any surprise,
But a reading adjusted,
Can’t really be trusted,
As it’s not what the reading implies.

Sea levels are always changing and past changes were often larger.

Other posts on Sea Levels