It’s like a Robert Ludlum novel, but weirder. Not only were there biolabs in Ukraine near the border with Russia, which held something the US Government was afraid the Russians might capture, but the US Presidents son helped provide the money to build them in 2014.

Commenter at The DailyMail: (thanks Richard C)

JeffSwanson:  If his [Hunter Biden’s] last name were Trump this would be 24/7 news on every station. 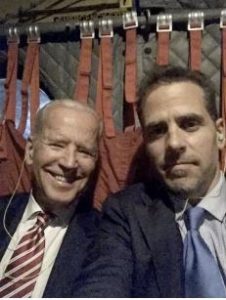 A photo from that laptop.

Two weeks ago the GatewayPundit reported that Hunter Biden’s firm Rosemont Seneca provided money for Metabiota, one of the firms behind the creation of Biolabs in Ukraine. Before that, Infowars was wondering why the Pentagon needed laboratories in Ukraine.  Apparently the US Department of Defense invested in the creation of Biolabs in Ukraine with the help of a firm called Black & Veatch. They in turn funneled money to Metabiota which “ specializes in detecting, tracking, and analyzing potential disease outbreaks.”

Meanwhile Hunter Biden, son of the then VP of the US was appointed to the board of a big gas company in Ukraine, for no good reason that anyone can explain.  That big gas company, called Burisma was owned by a Ukrainian Oligarch who set it up in 2002 and had the, ahem, good fortune to be the Ukrainian Minister of Ecology and Natural Resources from 2010 to 2012.  Handy eh? That billionaire, Mykola Zlochevsky, has also been investigated at various times for alleged money laundering, tax evasion and corruption. Imagine that?

The US Government now says the bio-labs were not making weapons but were funded through the “Defense Threat Reduction Agency”. Presumably the US government was just worried the Russians might steal their antidotes?

Wait ’til you see who else is connected. It seems Metabiota worked with the infamous Wuhan Institute of Virology and the well known EcoHealth Alliance and together they all published a study on diseases from bats in China in 2014.

Maybe we’ll get some answers if the US House Republicans win and subpoena Hunter Biden. Like who was “the big guy” he paid a cut to, maybe?

The Laptop from Hell continues to deliver.

Emails and defense contract data reviewed by DailyMail.com suggest that Hunter had a prominent role in making sure Metabiota was able to conduct its pathogen research just a few hundred miles from the border with Russia.

The project turned into a national security liability for Ukraine when Russian forces invaded the country last month.

Metabiota has worked in Ukraine for Black & Veatch, a US defense contractor with deep ties to military intelligence agencies, which built secure labs in Ukraine that analyzed killer diseases and bioweapons.

The president’s son and his colleagues invested $500,000 in Metabiota through their firm Rosemont Seneca Technology Partners.

Hunter Biden was involved in lots of companies but he was very enthusiastic about this one, and had the oddest emails about it:

Hunter was also particularly involved in Metabiota’s operations in Ukraine. Hunter’s pitches to investors claimed that they not only organized funding for the firm, they also helped it ‘get new customers’ including ‘government agencies in case of Metabiota’.

The vice President of Metabiota mysteriously wrote to Hunter in 2014 about how they could help with … strategic geopolitical goals?

… how we can potentially leverage our team, networks, and concepts to assert Ukraine’s cultural and economic independence from Russia and continued integration into Western society.’

Was this biolab a medical lab, or a military one? Even more strangely, Hunter was apparently selling the idea to the Ukrainian billionare oligarch who owned Burisma and he too was excited.

[Former senior CIA officer] Sam Faddis told DailyMail.com that the attempt to get Metabiota to form a partnership with Burisma was a perplexing and worrying revelation.

‘His father was the Vice President of the United States and in charge of relations with Ukraine. So why was Hunter not only on the board of a suspect Ukrainian gas firm, but also hooked them up with a company working on bioweapons research?’ Faddis said.

How tangled was this web: some other guy and partner of Hunter Biden, the NationalPulse reports — apparently bragged he could get a friend to “reach out to the DoD” to get information  to “to prove the company’s bona fides to top prospective investors Goldman Sachs and Morgan Stanley”.

So possibly people who knew Hunter Biden were also getting inside information on Metabiota to help the largest banks in the world make even more money?  Or perhaps they were all just really concerned about Ukraine…