Dr Marion Gruber and Dr Phillip Krause were not just at the FDA, they had been there for 30 years and were heading up the teams that decided last week to approve Pfizer for 16 year olds last week.

Gruber and Krause were upset about the Biden administration’s recent announcement that adults should get a coronavirus booster vaccination eight months after they received their second shot, according to people familiar with their thinking.

Neither believed there was enough data to justify offering booster shots yet, the people said, and both viewed the announcement, amplified by President Joe Biden, as pressure on the FDA to quickly authorize them.

They are worried about that Israeli data showing people vaccinated in January only had 16% protection left in July.

White House officials have stressed that the plan for Americans to start receiving boosters next month was uniformly endorsed by the most senior federal health officials, including Dr. Janet Woodcock, the acting FDA commissioner. They have described the need to develop a booster plan as urgent in light of growing evidence that the vaccines lose potency over time — a trend that they fear suggests the vaccines’ protection against severe disease and hospitalization will also soon weaken.

Remember this graph of the Israeli data — the one that shocked the markets in July? 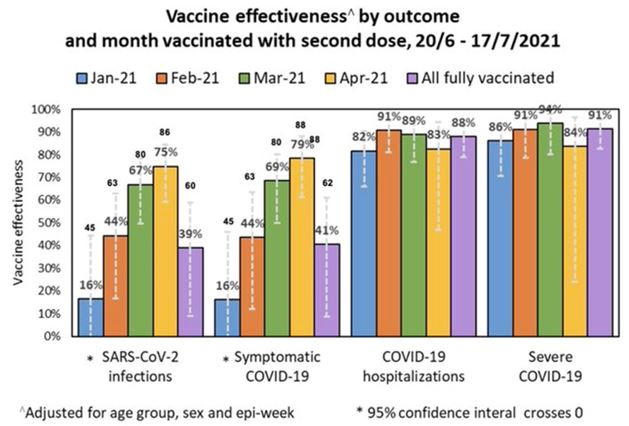 The January cohort (blue) may have included the highest risk people, so perhaps some immune responses won’t fold as fast in other groups. But even in the success at preventing hospitalization lies bad news. The vaccines (mostly Pfizer) were still useful at preventing hospitalization 82% of the time — but that means nearly one out of five of the highest risk people aren’t protected, even though they are double vaccinated. This might be workable if the vaccines stopped transmission, but they’re only 50% effective in stopping the virus spreading.

So it’s not surprising the Biden Administration wants to start the booster shots in just three weeks, but the FDA hasn’t done the safety checks yet. It’s an IPCC-climate-science type quandary where the outcome is known before the investigation:

…FDA regulators are in the position of trying to determine whether booster shots are safe and effective after the White House — and their own agency head, Woodcock — already endorsed administering them.

“This process has been the reverse of what we would normally expect in vaccine policy,” with the administration announcing plans based on a certain outcome before regulators can complete their review, said Jason L. Schwartz, an associate professor of health policy at the Yale School of Public Health.

Meanwhile in Israel the third booster dose is now so normalized (after all of three weeks) that the old two-dose-passports might get tossed in the bin. That ticket to freedom is now just a five or six month pass. Three-Vax can lock out the Two-Vax.