Back in August I posted the extraordinary first quotes from Prof Andy Pitman that there was no link between climate change and drought. 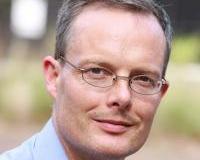 The news about droughts was banal and obvious, because more water evaporates in a warmer world, and therefore, more rain falls — how could it be any other way? What goes up, must come down. But that quote was very important because it had never been stated so unequivocally by a high ranking believer and modeler. (Thanks to Jim Sternhill for spotting this incendiary and unwittingly honest quote.) Since being posted here, those quotes have been picked up by Maurice Newman, Alan Jones, then Chris Kenny (The Australian editor) and Andrew Bolt — which means the Pitman-drought-admission has become a major headache for the climate machine. Hence, they had to come up with some fogging excuse to muddy up the clarity, and here it is. Pitman forgot one word.

Prof Andy Pitman now says that he meant to say there was no direct link:

Barry said this “clarification” said Pitman had “left out a crucial word”: that “there is no direct link between climate change and drought”.

“But does global warming lead to changes in rainfall patterns that can lead to drought? Yes. This indirect link is clear … In some regions, this increases the risk of drought, in other regions it decreases the risk.”

As recoveries go, this rates “Good try, but no banana”. Adding just one word leaves open the vague-fortune-teller-type possibility that our car exhausts can indirectly cause droughts — but none of the Global Climate Models can predict regional rainfall reliably, or even unreliably. They can’t even manage to predict the plus or minus sign in precipitation trends. GCM’s are officially up there with coin tosses. So it is a bit (as in, totally) misleading of Pitman to say the indirect link is clear. There’s no definitive evidence that changing CO2 levels has any measurable effect on rainfall patterns at all — if there was, the modelers might have some clue of which regions would get wetter and which wouldn’t, instead of being completely skillless on precipitation. (see Anagnostopolous, 2010 for starters).

Lets not forget what Andy Pitman also said in June:

“…the fundamental problem we have is that we don’t understand what causes droughts.”

Yes, exactly. That’s rather a bomb on the idea that anything might “be clear”. Apparently, even though the forces that drive droughts are a mystery to climate scientists, they “know” that CO2 has a connection somehow, someway. Lo, and Neptune is travelling through the constellation Pisces — causing carp to rain on the GCMs. Expect a mysterious man to steal your heart next month, or perhaps just part of your wallet through your electricity bill.

Meanwhile for people born under The Sun, UNSW is stealing part our inheritance, our tax and sanity with fake science. Enough is enough.

Since we’re doing the Pitman flashback — let’s remember how damning all those original words were.

The vague allusion to a possible indirect mechanism was all that was needed by Paul Barry on ABC MediaWatch to accuse Bolt of omitting key information:

Andrew Bolt called it pathetic deceptive and evasive, pointing out he had put the full quotes on his blog, and that falling rainfall in the last twenty years was irrelevant if there was no trend in the last 100 years, and that even Andy Pitman said that these changes in trends show “how variable Australian rainfall is”.

Today Andrew Bolt has a slide from a Pitman presentation.

In the words of Andy Pitman:

“Current science cannot tell us of the sign of the change in future drought.”

Paul Barry has no idea how bad the rainfall predictions are — he’s a lamb to the slaughter. He accuses Bolt of hyping up the Pitman speech:

Paul Barry: Note the emphasis on “admits”, as if he’s known it all along and finally fessed up.

But here’s the thing, that’s absolutely true.  The modelers have known all along. A warmer world means more rain.

And all the “evidence” Paul Barry cites are just guesstimates that come from a simulated planet in a galaxy far far away:

Also, if you look at the published research — as Kenny, Jones and Bolt could easily have done — you’ll find any number of climate scientists concluding that global warming is having an effect.

The recent drought in South Africa, for example, in which Cape Town nearly ran out of water, was made three times more likely by climate change, according to researchers led by Oxford University’s Environmental Change Institute.

And studies by different researchers of 45 droughts around the world — mapped here by UK website Carbon Brief — have found that 30 were made worse or more likely by human-induced climate change.

So fake evidence from fake planets. And Paul Barry, master journalist of journalists, could have “looked” at the published research too, just as easily as he says Kenny, Bolt, and Jones could have. Obviously he didn’t. Or he could have just googled and found joannenova.com.au and I would have explained for free just how meaningless those modeled calculations of “percentage chances” are when they come from skillless models that even the modelers admit ” don’t understand what causes droughts.”

Might as well ask as astrologer how many droughts were caused by your  air conditioner. It’s be better national policy than asking UNSW – it’d have just as much chance of success but be a lot cheaper.

I’ve been pointing out for years how dismal climate modelers are with rainfall, quite possibly because they don’t include solar spectral, magnetic or solar wind variation and solar cycles seem to be linked to rainfall, streamflow, jetstreams, floods and droughts: