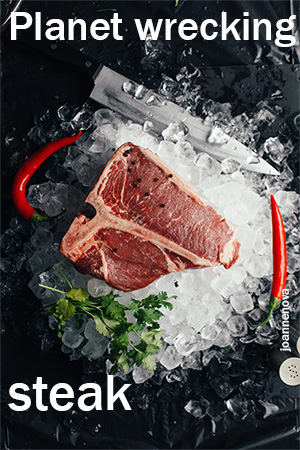 The Steak is coming to get you.

Good news, the Intergovernmental Holy Panel has finally released the new World-Saving IPCC Diet (WSID) which will stop storms, volcanoes and the spread of jellyfish. It also solves all those difficult dietary questions — instead of worrying about your weight, your blood pressure, or your brain, you can sip on a soy latte and know that even if you get dementia from the B12 deficiency or the tofu, you are A Virtuous Signaller. Lucky you.

And even though an atmospheric physicist supposedly can’t advise us on the climate, it’s fine for a climate scientist to tell us what to eat. They already tell us what car to drive and how many kids we should have. Why not?

Vegetarian diets and a “sin” tax on unsustainable meat could help to limit climate change, a major new report by the Intergovernmental Panel on Climate Change says.

Sinning with meat for 2 million years?

Humans have been eating meat for 2.6 million years at least, or about 100,000 generations, but it’s time to take the precautionary principle and toss that genetic heritage to the wind.

Meat is a good (as in “the only”) source of Cobalamin, known as vitamin B12, which your body uses to make the myelin sheath on nerves among other things (it’s the insulation on your personal electricity grid). The side effects of not getting enough include:

…demyelinisation of peripheral nerves, the spinal cord, cranial nerves and the brain, resulting in nerve damage and neuropsychiatric abnormalities. Neurological symptoms of vitamin B12 deficiency include numbness and tingling of the hands and feet, decreased sensation, difficulties walking, loss of bowel and bladder control, memory loss, dementia, depression, general weakness and psychosis.3,4 Unless detected and treated early, these symptoms can be irreversible.  — Zeuschner et al 2013

Meat is also the best source for creatine, carnitine, methionine, DHA, taurine and iron. Obviously millions of people do fine without meat, but it’s a bit of a bummer for those with defective enzymes or SNP (single nucleotide polymorphisms) in any of these pathways. Some people just shouldn’t be vegetarians. (I know, I was one).

Then there is the infamous Honolulu Heart Study and the dementia-increasing effect of soy, which appears to be replicated in elderly Chinese, Indonesians and Japanese Americans. Other researchers say soy consumption may be a significant contributor to Alzheimer’s dementia. (So may a lot of other things, it has to be said). We could call this side effect “Global Dumbing”. If only it were a joke.

There looks like some unfortunate trade-offs in trying to reduce global temperatures with our dinner plates. I have barely got started on the health effects, the risks, the costs involved.

If only the ABC / BBC / CBC had well funded specialist science units which could ask those kind of questions. Oh wait…

As it is, dieticians have a torrid time trying to figure out what humans should eat, only a cult fanatic would think climate models would do it better.

In the IPCC SRCCL (Book of  Chapter 7 titled: Risk management and decision making in relation to sustainable development  they talk about trade-offs, and poverty, but don’t mention SNPs, or cobalamin, or B12, or even the word “vitamin”. Perhaps it’s in some other chapter? It’s not in the Summary for Policymakers, and not in Chapter 1. Nevermind.

Tax the oceans instead

In any case the reason cows and sheep are being targeted in the first place were because of methane emissions, and as Tom Quirk found here, global methane levels appear to be mostly due to El Ninos, rainfall and leaky Russian pipes.

How many healthy people do we sacrifice to the weather Gods this time?

Save the forests, burn more coal

If the IPCC are so concerned about forest destruction the best thing they could suggest is to cut back solar and wind power and biofuels which use up to 500 times as much land area as fossil fuels or nuclear power does.

And if people are concerned about food security ponder that the IPCC says that about a third of food is lost or wasted. (Quoting Pep Canadell, executive director of the Global Carbon Project and a researcher at CSIRO). Sounds like we have plenty to spare then, especially if we stop trying to feed good food to cars instead of people .

The IPCC Press release  is titled — Land is A Critical Resource. Like we didn’t know that.

As expected from the Groupthink Fashion Leaders of the World, the key statistics are not about the planet, the cows or the plants, but about them:

Key statistics of the Special Report on Climate Change and Land

The report was prepared by 107 experts from 52 countries who acted as:

This is the first IPCC report in which a majority of the authors (53%) are from developing countries.  Women account for 40% of the Coordinating Lead Authors.

Life on Earth is at risk, but the IPCC still has time to count their diversity score.

h/t Pat, George and Dave B

The globalist U.N. elite,
Now tell us what we must eat,
And to drink soy latte,
To keep hurricanes away,
Which are caused by eating red meat.

The Summary for Policymakers of the Special Report on Climate Change and Land (SRCCL) is available at https://ipcc.ch/report/srccl. A Fact Sheet and Headline Statements are available at www.ipcc.ch. All the chapters and details you don’t want to read are available.