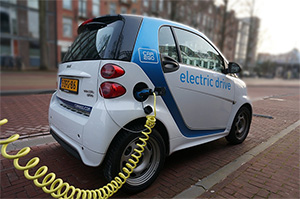 Fantasy-land: Labor wants half of all new cars sales to be EV’s by 2030. That’s a radical change in a big country that loves its cars and drives great distances. Last year only 0.2% of new car purchases were EV’s. Our grid is already struggling, and extra charging cars would push it over the edge and may add something like $20b a year in extra network and generation costs.

This makes no sense on so many levels: in Australia EV’s are 80% fossil fuel powered and over their lifetime they cause more pollution than internal combustion engines.

Electric Vehicles produce more carbon emissions if the grid that charges them is powered by fossil fuels.

The results reveal that the energy consumption and greenhouse gas emissions of a battery electric vehicle production range from 92.4 to 94.3 GJ and 15.0 to 15.2 t CO2eq, which are about 50% higher than those of an internal combustion engine vehicle, 63.5 GJ and 10.0 t CO2eq. This substantial change can be mainly attributed to the production of traction batteries, the essential components for battery electric vehicles. (Qiao, 2017)

EV’s are so useless for the environment you might wonder why Labor and the Greens love them. Take your pick:

With our coal fired grid and long distances the only place on Earth less suited to EV’s is Antarctica, where it is too cold for the batteries to work and where people die when they run out of “fuel”. Although at least Antarcticans won’t have to worry about extreme heat setting their batteries on fire.

Electric Vehicles in Australia are 80% powered by fossil fuels

Unless our grid power goes nuclear the electricity draining into these cars is 60% coal fired, 20% natural gas and diesel powered and 20% “renewable”. The coal percentage would presumably be even higher if they get charged at night, like most electric vehicles surely are. (Figures from Dept of Environment and Energy)

This is a wild transformation. Currently 499 Australians out of 500 choose anything but an EV:

Behyad Jafari, chief executive of the Electric Vehicle Council which worked with Labor on the plan, said EV sales in Australia totalled 2216 last year, or about one in 500 cars sold. — Peter Hannam, SMH

As I said with the Greens policy. Only one in 4000 cars currently on the road in Australia is electric:

There are about 20 million cars currently registered in Australia. The total car pool of all electric vehicles sold here since Australia was federated is about 5,000 cars, making EV’s 0.025 per cent of all cars on the road. You can see how much we love them.

Each electric car needs about $2000 per year in extra network and generation:

The Australian Energy Market Commission (AEMC) released a warning in 2013 that electric cars will cost a lot more than just the purchase price and the electricity:

Electric vehicles in particular are another new “appliance” which is set to place new demands on Australia’s power system. This review has found that each electric vehicle could impose additional network and generation costs from $7500 up to $10,000 per vehicle over the 5 years from 2015 to 2020 in the absence of appropriate pricing signals and efficient charging decisions.

Who pays for the extra generation capacity? Under current market arrangements all consumers would have to pay this extra cost regardless of whether they owned an electric car. Using the AMEX figures, if half our 20 million cars were electric that would add another $20 billion dollars a year to network and generation costs (and that was in 2013 prices).

New “fat” batteries on EV’s draw so much current we need a whole new grid:

New bigger batteries need two days to charge at 7kW which is like adding “three new houses to the grid” and that’s the good option. If consumers want to fast charge (who wouldn’t) the 50kW option is like adding “20 homes”. (Vector, New Zealand Report 2018)

Ten million cars fast-charging at the same time would be like adding 200 million homes to the grid. Psycho.

All around the world consumers need lavish subsidies and rewards to be coerced into buying EV’s. Governments have to offer subsidies in China, India, Japan, Denmark, Norway and practically every country on earth.  In South Korea the subsidy is something like US$12,000. In Norway electric vehicles are exempt from purchase taxes (which are extremely high for other cars). They’re also exempt from the annual road tax, all public parking fees,  and toll payments. How much icing does that cake need? A lot: Sales of EV’s collapsed from 2000 cars to just 32 cars in Hong Kong when subsidies were withdrawn.

EV’s in Australia just cost too much.

The Mitsubishi iMiev arrived in 2010, with a range of just 150km and a hefty price tag of $49,000. The Nissan Leaf was about three times as expensive as a comparable petrol-powered car. The Holden Volt cost $60,000. Only the super-rich could hope to afford the more glamorous Tesla Roadster at more than $200,000.   — Sam Clench, News.com

Electric vehicles are the perfect car for socialist governments. It’s another industry destined to be totally dependent on Big Government. EV cars and their owners are born Big Gov lobbyists. They form part of a club to cheer on other big-gov dependents.

The ALP are simply copying the Greens fairytale plans and multiplying by half. But make no mistake, the Labor plans are obscenely ridiculous all on their own. The job of the Greens is to make extreme Labor policies look “moderate” in comparison with something twice as stupid.

Other posts on EV’s: