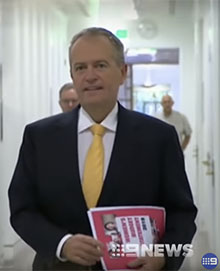 I know commenters discussed this on the weekend, but lest anyone missed it. The man who wants half of all new cars sold in Australia to be electric thinks they can be charged in 8 -10 minutes, depending on how flat the battery is. He may be our Prime Minister in a matter of weeks.

We can see how much research and planning goes into Labor Party policy.

“How long does it take to charge it up?” Jackie O asked the alternative prime minister in an interview on the Kyle and Jackie O radio show this morning.

“Oh, it can take, umm … it depends on what your original charge is, but it can take, err, 8 to 10 minutes depend on your charge, it can take longer … ” Mr Shorten replied unconvincingly.

“Is that all?” Jackie O pressed.

“Well it depends how flat your battery is,” Mr Shorten said.

Shorten also says that if we do this we can start to say goodbye to “angry” summers and natural disasters ….

UPDATE: The myth that Shorten was right

Seeing the tragedy unfolding, assistants leapt to Shorten’s defense to say that there is a theoretical planned, possible battery charger that can charge in 10 minutes. But read Shorten’s words again — he is strictly all waffly present tense, and the only qualifier is “how flat the battery is”. This is not a man thinking of kW or amps. Jackie O presses him to expand, but he can’t.

In the world there is one show-pony super fast charger of 350kW — but there are no cars that can use that speed. Most home chargers are  3 kW and up to 7kW. It’s all very well for some EV fans to rave about how far new batteries go, but those new big batteries need two whole days even at 7kW to get fully charged. (see that Vector report)

PLUS we’re going to need a whole new grid

There’s the problem that each fast charger is like adding 20 extra houses. The Vector, New Zealand Report 2018  claimed that new big batteries are like adding “three new houses to the grid” (if they are charging at 7kW). If consumers want to fast charge at 50kW it is like adding “20 homes”. (Though at the moment the cost of a 50kW charger is NZ $50,000 which would rather limit the rush to buy them.)

Australians buy around 1 million new cars a year, so that would be 500,000 new EV’s each year by 2030 according to the Labor Party plan. If I read it correctly, according to the Vector NZ report that would be like adding another ten million homes to the Australian grid each year in terms of network capacity — and we only have 10 million homes in the country. Could it really be that nuts?