Feeling friendless, floppy and like a loser? It’s not your fault. Blame a coal plant. Blame Exxon. Blame anyone but yourself. It’s your bad luck to be born into the most bountiful, benevolent era in human history. Damn!

Lonely, unfit and hooked on air-conditioning – is this the summer of the future?

Are we kidding? Thirty-eight degrees is just a summer’s day in Perth. It’s something that happens 19 years out of 20. As for coal generators shutting down: we’ve spent 20 years trying to drive them out of business to stop climate change, and now, if they don’t work, that proves climate change is real? The reasoning is so circular it could give people whiplash.

Let’s not forget coal plants run at 550 degrees plus (unless they run at 1000C). They don’t shut down when it gets two degrees hotter outside, they are some of the last generators running. They outlast even the nuclear plants. (Not that we have any of those).

And Lordy, a modern university professor was trapped in his airconditioned car in Adelaide and discovered sunlight goes “through glass”:

It was not what the Griffith University professor had planned. But as a monster heatwave baked a crust onto southern Australia, “it was not possible to be outside at all”, he says. “I couldn’t do anything, I was basically just in the car all the time. Even then I got fried because the sunshine was so hot, it went through the glass,” Stantic recalls.

So he cut his holiday short.

Once, long ago, my parents drove 4,000km right across Australia in January, including 700km of dirt road over the Nullabor in an un-air-conditioned EJ Holden. They couldn’t put the windows down or the car would fill up with dust. At times the car was over 50C inside. Somehow they survived, and even had fun. In the 1800’s people did it on horseback (if they were lucky). If they weren’t lucky, they walked from Perth to Kalgoorlie with wheelbarrows. No fans, no fridges, no phones. What a bunch of fat unfit sissies we are.

Dead fish, dead birds, and even a dead baby.  The mercury hit 120F in Collarenebri. (That’s 50C, again, just another one among our long list of 50C temps).

You know it must be climate change when things are almost as hot and deadly 87 years later. 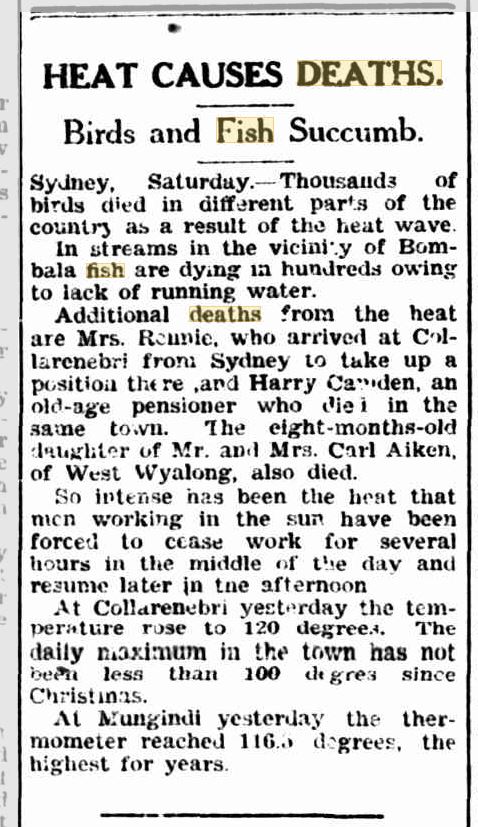 Mass fish and bird deaths in 1932 prove climate change was something that happened all the time.

A world too hot for humans, my foot

At Observatory Hill in Sydney, it hasn’t even reached 40 degrees once this summer, despite building brick walls and giant freeways next to the thermometer to help it stay warm. They’ve switched to electronic one-second-record thermometers too which you’d think could electronically pluck a 40C out of gusts of car exhaust coming off the freeway.

But it was hot hundreds of kilometers away:

The record-smashing temperatures of recent weeks have made it very clear: climate change has arrived. Depictions of a world almost too hot for humans are no longer an abstraction. Summer has changed, and so must we.

Hasham writes like a Hollywood marketing groupie. Where are the hard questions? The counter-points? Any semblance of critique?

Today people “on low incomes” we’re told, are lying on the floor because they can’t afford air conditioning. “They would literally lie on the floor in the coolest part of the house and not move for hours,” [Dr Louise] Crabtree says.

They are trapped in their homes “because they don’t have transport options that are affordable and cool.” It’s like a Soviet Gulag I tell you!

We’ve spent 30 years telling people to live in high density apartments and catch buses so they can stop heat waves.  But now they are imprisoned at home in heatwaves that keep coming, and what they really need is a car, cheap petrol and a garage at home to park it.

“We heard from people who, on a hot day, can’t get out of the house because they don’t have transport options that are affordable and cool.”

“If it’s just too hot and a walk to the bus stop is too far and the bus stop has no shade, people will stop walking. It’s very much impacting how much people are walking or bicycling,” Crabtree says.

Is the real problem the heat waves that Australia has always had, or is it that people can’t afford fuel and energy since the government decided we should try to change the weather instead?

h/t David B in Cooyal