Thanks to the Californian conflagration, Global Climate Superstition is here again to tell us that fires in coal plants cause fires in forests.  Scientists, on the other hand, find that as emissions got higher there was a fall in wildfires globally, droughts didn’t get worse and winds have slowed.

The witchdoctors play on the Back in the days when people rowed their battleships to war, the megadroughts were really mega. Despite all the mechanization (or probably because of it) global biomass burning was lower in the last century than anytime since Julius Caesar.

If CO2 is the driving force behind fires apparently we need more of it.

When it comes to fire, temperature is not as important as wind speed, fuel load, and the density of arsonists.

Last we heard, winds were slowing globally at a rate of 0.5km/hour. The great Global Stilling can’t be bad for fires (though it can’t be good for wind farms). Perhaps a slightly slower wind is irrelevant. But then if half a kilometer per hour of wind doesn’t matter, why does half a degree of warming? Judging by the actual area burned by fires, not.

As Willis Eschenbach points out California is only warming by 0.02°C per decade, and the rain has only declined “by a totally meaningless five-hundredths of an inch (1.1 mm) per decade.”

The area being burnt around the globe has been … shrinking.

Figure 2. Wildfire occurrence (a) and corresponding area burnt (b) in the European Mediterranean region for the period 1980 – 2010. Source: San-Miguel-Ayanz et al. [37].

As Doerr and Santini say, it’s not just the recent past, but the long term trend too:

Analysis of charcoal records in sediments (Marlon et al) and isotope-ratio records in ice cores (Wang et al) suggest that global biomass burning during the past century has been lower than at any time in the past 2000 years.

Could this be a coincidence? Perhaps fossil fuel powered trucks, bulldozers, helicopters and chainsaws, plus fossil-fuel-launched satellites are better at making firebreaks, identifying spot fires, and stopping fires from spreading?

There’s been no change in global drought in the last 60 years. (Sheffield et al).

Droughts are not getting worse in the US either. 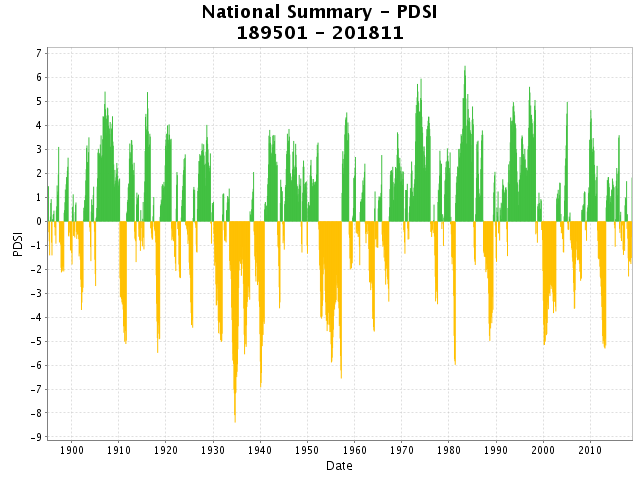 Back in the good old days Megadroughts lasted 242 years. California has not even been a state that long.

Graph from Cook et al, adapted by The Mercury News, and made funny and interesting by Tony Heller.

Best wishes to Anthony Watts and everyone near the fires in California.