Comforting to know that hundreds of millions were saved because the SA blackout hit at 4pm:

Today in SA: blackout cost $367m but could have been worse

The results of a comprehensive survey of Business SA members of the impact of the September 28 blackout released today also found many did not have business interruption insurance and, of those who did, more than half were not covered for losses resulting from the outage.

The overall financial impact on South Australia was a loss of $367m but, in occurring late in the trading day, the effect of the blackout was lower than it would have been if it had happened first thing in the morning.

“Considering 70 per cent of respondents had power restored within 24 hours we are looking at a cost of close to $120,000 per minute for business in the state,” the report found. –The Australian

Only 12% of businesses surveyed had backup generators.

Who wants electricity at twice the price? Judith Sloan:

Perhaps they can make the submarines with bullocks and drays?

This is an ideal moment to post up the latest graph of forecast “shortfalls” in reserve electricity in SA. If this graph means what I think it does, SA grid managers must be hoping for a cool summer. The red lines are labelled “Reserve Shortfall”, and it seems rather significant that no other state (see that source link) has any red lines at all… (Thanks to Warwick Hughes for the tip about this page).

The red line days are around Jan 10th, Jan 16th, Jan 24th. (But what’s a 150MW between friends? As it happens, it’s about the same size as the Olympic Dam mine which uses 170MW). The Heywood interconnect from Victoria can supply 500MW, so the 150MW gap may not be an issue, assuming that Victoria doesn’t need those megawatts itself. I suppose SA might get by?) Once SA had two coal fired plants, Northern Power Station (520MW, which stopped in May 2016) and Playford B (240MW), which ceased in 2012, and was blown up last September).

As Warwick Hughes notes, if you think this summer is going to be fun in SA, wait til you see 2018: 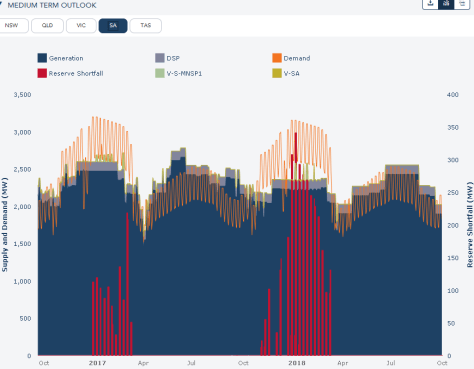 For a state with the most expensive electricity, and that was “islanded” again this week (isolated from the national grid) the Premier of SA made possibly the weakest negotiation ploy ever seen. This week, he bravely threatened to “go it alone” and isolate himself with a burdensome, expensive, carbon-scheme-to-change-the-weather if the Libs didn’t do a national one first. Strangely no other states leapt to join him, and nor did the national government.

Even the greenest theme Premiers were running away:

Victorian Premier Daniel Andrews yesterday said while he was “very proud” of Labor states setting their own ambitious renewable energy targets, he had “no intention” of pursuing a state-based EIS.

Judith Sloan sums up the Climate Change Authority’s compelling reasons to not do emissions intensity schemes:

The journalists might care to consult the impenetrable, technocratic report by the Climate Change Authority on the topic. Here is the key paragraph: “The ability of emissions-trading schemes [including emissions-intensity schemes] and carbon taxes to drive substantial changes in long-term investment decisions towards lower emissions alternatives has yet to be demonstrated in practice.

“For this to happen, investors must have the confidence to allocate billions of dollars to projects that would be uneconomic if the policy were repealed or watered down in the future. Policy stability and credibility is crucial. To date, ETSs and carbon taxes do not appear to have influenced long-term investment decisions in a large-scale way.”

BACKGROUND to the SA Electricity crisis (all the links).

People saw The South Australian black out coming. There were warnings that the dominance of renewables made it vulnerable. Then when it came, it all fell over in a few seconds — read the gruesome details of how fast a grid collapses: Three towers, six windfarms and 12 seconds to disaster. Ultimately the 40% renewable SA grid is crippled by complexity.   The AEMO Report blames renewables: The SA Blackout was due to lack of “synchronous inertia”.  The early estimates suggest the blackout costs South Australia at least $367m, plus their normal electricity is twice the price, and there are reserve shortfalls coming in January 2018 (pray for a cool summer). Welcome to the future of unreliable electricity: Rolling blackouts ordered in SA in 40C heat. And  more bad luck for South Australia, yet another blackout, 300 powerlines down, 125,000 homes cut off.  See all the posts on Renewable Energy and  Electricity Grids.