Time to pop some bubbles

There is a $1.5 Trillion industry selling us better weather. If this climate money bubble were to collapse, someone is going to make a motza-lot of money. (And it might as well be the skeptics who saw it coming, eh?)  Would you like to help develop a hedge fund that can play that game, and take those bets, both to invest and divest, to hedge, donate, and fund research? Another task is to also grow a philanthropic hedge fund management company.*

One day soon, you may like the idea of short-selling overvalued renewables stocks, and doing other things that profit from cooler weather or collapsing subsidies — but which fund could you invest in to manage that? It’s a niche crying out to be filled. David and I liked this idea so much when we were approached by Chris Dawson two years ago, we got involved in developing Cool Futures (and obviously stand to benefit if this comes together, see the Disclosure at the end).

Cool Futures could change the game in so many ways. The vision here is much more than just profit making. It’s about being a player, doing due diligence, putting our money where our mouth is, and having the conviction to face the risks. Instead of standing on the sidelines and telling the world what’s wrong with the current system, it’s about taking steps to make it happen — to reallocate funds to better uses. What free market thinker wouldn’t be tempted?

I’m not a financial planner (read the disclaimer at the end). I’ll leave it to Chris Dawson to explain what the fund needs and why you might want to join the team in the same way James Delingpole has. Cool Futures already has a website, the legal structure, and a Cayman Islands hedge fund in place. There is and has been a lot going on behind the scenes.

When before in history was so much misallocated money pumped into schemes to slow storms and hold back the tide? When before was low cost energy and prosperity for ordinary people despised and attacked by the politically correct, by the self-anointed elites of the West — because they ‘know’ best?

Big science is often done best outside big government. For example, Craig Ventner stepped in to beat the government-run Human Genome Project at its own game. It is long past time private industry arrived to rescue climate science from the dismal rut that monopolistic funding created.

James Delingpole in The Spectator: “I’m putting my money where my mouth is”

“…what if there were an area of the markets which you knew to be grotesquely overvalued as a result of ignorance, dishonesty, and false sentiment? You’d be mad not to bet against it…”

PS: For perspective and insight don’t miss Jaymez’s comment at #13 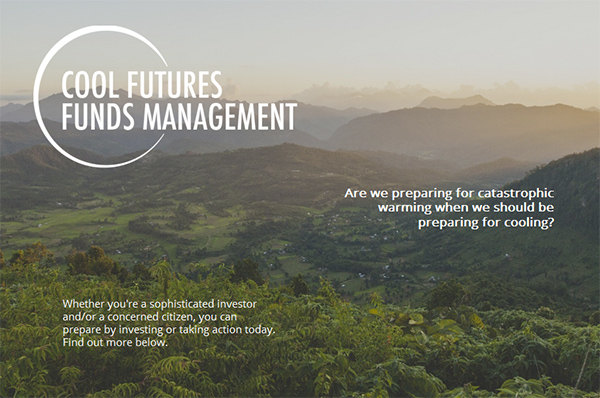 We’re hedging our bets on climate change, and on changing climate policy.

Hedge funds generate wealth from imbalances and economic inefficiencies. The man-made global warming scare distorts information flows, misallocates capital, and feeds corruption — and these burdens are becoming a big drag on western economies. The idea that mankind should try to change the global climate with expensive electricity is a luxury of the once rich West. As the budget screws tighten, the economic damage caused by the global warming industry will only hasten its own decline.

Every year about 1.5 trillion US dollars are directed to inefficient, subsidy-dependent businesses, at the expense of consumers and real market-driven enterprises. This destroys wealth and costs jobs.

A hedge fund manager has a special toolkit to tackle this waste. It includes advanced mathematical skills, often described as ‘rocket science’. (The same tools our team has applied to the science of climate change can also be applied to the positions taken and trades made.)

As the recognition spreads that increasing carbon dioxide has little effect on the global temperature, the manager of the Cool Futures hedge fund can redirect investment into useful market-driven areas, and can also support research aimed at better predicting the climate using factors previously ignored. Being ahead of government research, and the politically correct elite, will create its own opportunities for Cool Futures.

Like in the movie the Big Short (which was based on a true story, of a few people who in 2007 tried to warn everyone of the collapse of the artificially distorted US housing market), we are warning of the collapse of the artificial global warming industry. It will happen in a different way but, like in the movie, we plan to reap our rewards for being correct by using hedge fund techniques.

With all mainstream climate models predicting rapid warming due to increasing carbon dioxide, many industries will be totally unprepared if global cooling arrives instead. Research such as Dr Evans’ Notch Delay theory can be tested and explored in greater depth — better understanding of the timing and extent of any global cooling will allow Cool Futures to better target our investments, and enable people to better prepare for climate change.

Success breeds success. People will notice profits created through a real due diligence of the science, economics, and finance of climate change. Hopefully that will impact public policy development, potentially bringing about debates increasingly based on evidence, which should lead to better-informed policies.

Can a hedge fund run by philanthropic skeptics, while generating sufficient returns for its high net worth sophisticated investors, also act as a catalyst for the restoration of empirical science, enlightened education, and reasoned debate? We feel it can.

Right now we need seed funding, donations, and help for our impending launch. Readers can find out how to get involved through the crowd funding campaign. (Or click the logo on the right).

Please explore these links, and ask any questions in the comments below.

This is not an Information Memorandum or any other form of Offer Document.

This information solely is for the use of the person reading this post for the purpose of updating the reader as to progress in the establishment of the Cool Futures Hedge Fund.

This information therefore does not in any way constitute an offer to sell or a solicitation of an offer as this would require regulatory approval.

“…it feels right to be backing the only investment vehicle in the world explicitly geared to calling the Climate Scam’s bluff. Second, now I’m a ‘hedge fund manager’ not only will my friends respect me more but I’ll almost certainly be invited to join the Soros party in their private volcano in Davos next year…”
Risk, Disclosure and Disclaimer

Jo Nova and David Evans have an obvious conflict of interest and may personally benefit in the long run. David is a non-executive Director, both are shareholders. In future they may also be paid advisors and or contractors.  This is not a personal recommendation to anyone to invest, because Nova and Evans are not licensed or qualified to give investment advice. Therefore they accept no liability for any losses incurred by anyone choosing to donate or invest, now, or anytime in the future, in any product related to Cool Futures, or which is developed from these donations, or connected in any way to any Cool Futures entity. Read the  risks, disclosures and disclaimers on the Cool Futures site. Get professional advice. All hedge funds are risky. Etc. You know the drill…

* The Hedge Fund itself is different from the Philanthropic Management Company. The aim of the hedge fund is, naturally, to be profitable. In that process it will spin off some philanthropic benefits as a byproduct — by funding some research, doing due diligence, issuing press releases, and merely being there filling a hole in the market. In contrast, the Management Company can have philanthropic aims as an end unto itself — as a different entity, it can fund research, say, with the pure aim of research for research’s sake, rather than research for purely  profit’s sake.