I used to think there was a consensus among government-funded certified climate scientists, but a better study by Strengers, Verheegen, and Vringer shows even that is not true.[1] The “97% consensus” is now 43%.

More than 1800 international scientists studying various aspects of climate change (including climate physics, climate impacts, and mitigation) responded to the questionnaire. Some 6550 people were invited to participate in this survey, which took place in March and April 2012. Respondents were picked because they had authored articles with the key words ‘global warming’ and/or ‘global climate change’, covering the 1991–2011 period, via the Web of Science, or were included the climate scientist database assembled by Jim Prall, or just by a survey of peer reviewed climate science articles. Prall’s database includes some 200 names that have criticized mainstream science and about half had only published in “gray literature”. (But hey, the IPCC quoted rather a lot of gray literature itself. Donna LaFramboise found 5,587 non peer reviewed articles in AR4.)

Fabius Maximus deserves credit for finding and analyzing the study. He notes that only 64% agreed that man-made CO2 was the main or dominant driver controlling more than half of the temperature rise. But of this group (1,222 scientists), only 797 said it was “virtually certain” or “extremely likely”. That’s just 43% of climate scientists who fully agree with the IPCC statement. This survey directly asks climate scientists, unlike the clumsy versions by John Cook, William Anderegg, or Naomi Oreskes that do keyword surveys of abstracts in papers and try to “guess”.

Fabius Maximus suggests we exclude the “I don’t knows” which brings up the number to 47%. Since these are “climate scientists” I don’t see why those responses should be excluded. An expert saying “I don’t know” on the certainty question is an emphatic disagreement with the IPCC 95% certainty.

“It is extremely likely {95%+ certainty} that more than half of the observed increase in global average surface temperature from 1951 to 2010 was caused by the anthropogenic increase in greenhouse gas concentrations and other anthropogenic forcings together. ”

—  Summary for Policymakers of the IPCC’s AR5 Working Group I. 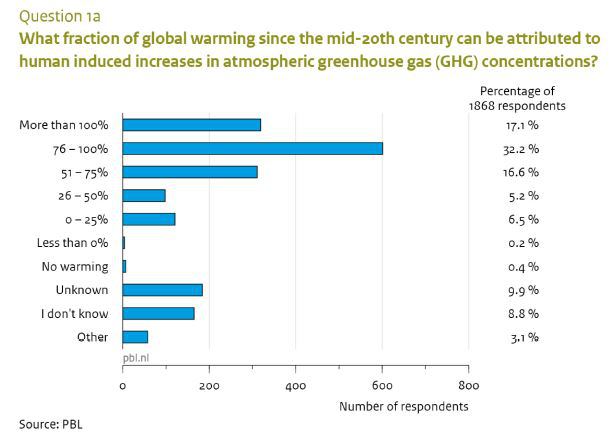 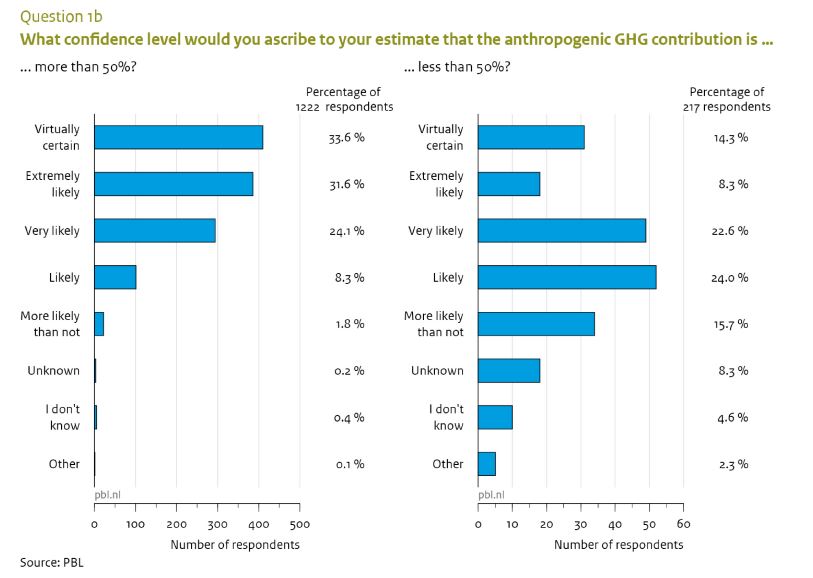 The researchers acknowledge that skeptics may be slightly over-represented, “it is likely that viewpoints that run counter to the prevailing consensus are somewhat (i.e. by a few percentage points) magnified in our results.” I say, given that skeptics get sacked, rarely get grants to research, and find it harder to get published, they are underrepresented in every way in the “certified” pool of publishing climate scientists. Skeptical scientists, I daresay, would be much less likely to use the keyword phrase “global warming” in the papers they do publish. I imagine it’s easier to get papers published that don’t specifically poke the mainstream buttons.

UPDATE: Curiously this new detailed study builds on a previous study by the PBL Netherlands Climate Assessment Agency, which was issued in 2014 and includes the same authors, as well as John Cook and a few others.[2] Jose Duarte responded to that first version, pointing out that many of the people surveyed worked in mitigation and impacts of climate change, (not climate “science” per se) which artificially inflated the results.[3]

Is there an alternate skeptical theory in climate science?

Fabius Maximus asks whether there is a common skeptic view-point, or a dominant paradigm, and talks about Thomas Kuhn’s The Structure of Scientific Revolutions

Kuhn’s work shows that a paradigm cannot be disproved, only replaced (details here). Unless the skeptics form a theory, they’ll remain minor players in the debates — the climate science debate and the public policy debate about climate change (they’re distinct, although often conflated).

To that end, I would say that no one has ever done a decent survey of skeptical scientists, so we don’t know. Though the fact that so many psychologists say they want to understand skeptics and so few of them survey the scientists or leaders involved in this is rather significant, methinks.

To venture a guess I would say that among skeptics the dominant hypothesis is that some factor to do with the Sun is far more important than man-made CO2. To the end that skeptics need an alternate hypothesis, I agree, and there are many working on just that. Dr David Evans (my other half) is still hammering through climate model architecture, assumptions, and solar datasets. Readers may be impatient waiting for an update; I can only say that sometimes the art of real research and discovery is better done in silence and without the pointless “bloodsport” of blog publication, but we are thinking “August” or “September”, and there are many posts in draft.  David prefers to keep a lower profile while researching, but he is working full time, and will be suggesting a paradigm shift in model design which looks like it will resolve a great many of the current model failures. The shift is only a small change in architecture, while keeping most core assumptions of IPCC models, yet it makes a profound change to the output. He has gone right back through the central assumptions of calculating climate sensitivity and the leading papers of the last fifteen years. As far as we know, he is the only skeptical scientist who comes from a professional background in model development combined with major league maths.

Independent science and independent commentary is only possible thanks to donations from readers.

We are very grateful to our team of supporters.

POST NOTE: Naturally, a study of “consensus” tells us something about socio-cultural factors but nothing specifically about the climate.

CORRECTION: The reference was originally incorrectly cited as the older (2014) paper (now numbered 2), though it was linked to the newer paper. This is now fixed.