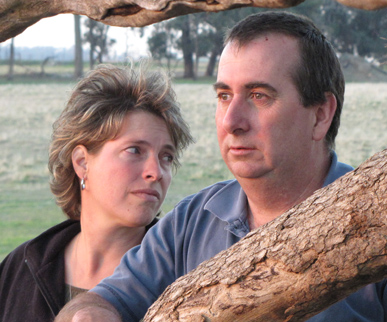 They came from the USA expecting to get a fair go. They broke no law, ran a profitable business, spoke out as skeptics and now stand to lose everything.

It’s not one law for all anymore, it’s 33 subclauses on your license because you’re not politically correct. It’s sudden changes to regulatory conditions that cost a family business millions. Bureaucrats can break a popular profitable business. What has happened to The Thompsons is something I didn’t think was possible in Australia. I thought we elected the people who make the rules. I thought our media would cover a scandal. How naive of me.

A Federal Court judge has just ruled that these Family Farmers can’t even sue the Department of Environment and Conservation (DEC) of Western Australia even though their license conditions were suddenly changed for no measureable, auditable reason. The decision is not good news, but Matt and Janet are not giving up. They will appeal the decision.

We can’t let Western Civilization be engulfed by bureaucratic fiefdoms. Matt and Janet could have taken the easier road and given up but they’re determined not to be beaten by the system, and if they can win, they help all of us.

Matt and Janet are fighting for all Australians. If they lose, we all lose.

Pop in to this thread and send a message of support to Matt and Janet in the comments. It can be a lonely road if you are the small guy battling the establishment. We need more people like the Thompsons.

The Background and Details

From Matt and Janet Thompson, a Federal Court judge has just ruled that they can’t sue the Department of Environment and Conservation (DEC) of Western Australia on behalf of their family-owned company, Narrogin Beef Producers.

After Matt  spoke out as a climate skeptic at a greenhouse gas reporting meeting in May 2007 the DEC  changed their farming license adding new impossible conditions which no bank would loan against. They had already signed contracts based on the previous license, and the newly reduced head-count drove them to the verge of bankruptcy. DEC even admits it broke it’s own rules. Apparently the Thompsons beef-feedlot didn’t smell right, even though Matt and Janet did everything the department suggested (and more), their closest neighbours wrote letters of support (wanting the farm to grow), 900 townfolk signed a petition for them, 6000 odour tests showed there was no problem, and wait for it, their farm was right next to a piggery which had run for 28 years. But 21 verified complaints from people who wanted to subdivide land and a number of other unchecked, not publicly listed, complaints about odours that can’t be measured were enough to close them down. And you thought Rule of Law applied in Australia? Not so, if you don’t butter up, pander, bow and obey the politically correct dictums set by unelected bureaucrats and the covert green-police, you too could be subject to random arbitrary license changes that insist your business must not offend anyone anywhere (and especially not your Green land-developing neighbours).

Should you ever be unlucky enough to be the small guy standing up to the establishment, don’t expect your tax dollars paid to the ABC will help you highlight the injustice and expose the corruption. It’s their ABC after all. And where is that supposed bastion of news: The West Australian?  They don’t seem to be in a hurry to let the citizens of Western Australia know how their Department of Environment play kingmakers.

Justice Barker ruled in the Federal Court of WA and dismissed our request for leave to file our case against DEC.  We will now soon face NAB’s application for possession of all of our assets in the WA Supreme Court.

In making his ruling Justice Barker referred to a decision in the Federal Court in Spencer v. Commonwealth in which the lower court ruled that Peter had no arguable case.  This is remarkable because it ignores the fact that the High Court later overturned this ruling.  There are several other points in Justice Barker’s ruling in which we believe Justice Barker ignored important evidence in making his decision.

Janet and I have decided to stay and fight it for all it’s worth.  We believe that we have been treated unfairly, and that countless others have as well.  Quitting at this point only empowers bullies, and leaves them unencumbered in their power to hurt others.

We will be appealing Justice Barker’s decision in the Federal Court, and defending NAB’s application against us in the WA Supreme Court.  Although this battle is not something we would have chosen for ourselves, it is what life handed us; and we are determined to do the best we can with it.

They asked to thank everyone who supported them last year, and believe they would not have been able to stay at their farm if it had not been for the help and support of readers around the world, and especially at Watts Up. With a big thank you to their lawyers Joshua Forrester (Ranger Legal, Perth) and Peter King (Queens Square Chambers, Sydney).

All the information about the Thompsons can be found at this source page, or look through all these posts tagged “Thompsons”. 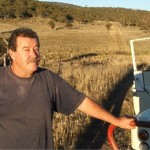 Peter Spencer bought a farm south of Canberra in the early 1980′s. In the mid 1990′s new laws rolled into action that prevented land clearing. So even though the land belonged to him, Peter could no longer clear the regrowth. Eighty percent of what he paid for was effectively confiscated for the carbon credits it accrued. He received nothing in return and there was no way out. He couldn’t sell the property — who would buy a piece of land they have no right to use? But Peter still had a mortgage to pay, and no way of earning the money to do it. In late 2010, his last legal avenue was exhausted, and the sherriff gained a warrant to take the farm off him. That was the final straw… and having already spent 200 days in court,  just trying to get his case heard, Peter went on a hunger strike that lasted 52 days.  I wrote about Peter Spencer in The CommonFascism of Australia.

For four years, the approach taken by the Australian Government Solicitor (for the Commonwealth) has been to deny the existence of any documents showing the existence of informal agreements between the Commonwealth and the Sates (relating to sequestration of carbon and land use change laws and measures) before and after the Kyoto meeting of the UNFCCC in 1997. Rather, counsel for the Commonwealth have repeatedly claimed that Mr Spencer was on a “fishing expedition” and have pulled every delay and denial tactic possible to prevent Spencer v Commonwealth of Australia going to trial. However, last week there was a 180 degree about face, as the Australian Government Solicitor and the Crown Solicitor for the New South Wales Government NSW changed tack from bluff and denial to negotiation. Finally, the Government law teams are complying with the High Court of Australia’s judgment last September overruling the Federal Court’s previous decision regarding the matter; and in the light of Spencer’s meticulous research and his filing for categories of (internal Government) documents sought.

Peter Spencer is very happy that finally he and his legal team have their “foot in the door”. Although the opposing legal teams have not yet handed over everything sought, it’s been left open to ask the Court for additional discovery if required.

Spencer supporters are also very much heartened by news that there is a great deal of discussion in the new NSW parliament in recognition of the strength of Spencer’s legal position. Even more important, there is recognition and discussion about the moral case implicit in the State taking from private landholders,

My posts on Peter Spencer are here.

UPDATE: I’ve changed the title to make it more descriptive for new people to the site. It was “Breaking: Thompsons lose right to sue DEC; but Spencer gets a green light”