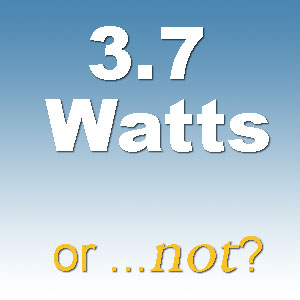 This is one of those scratch-your-head moments when a skeptic just has to ask “Could the modelers really have overlooked that?” Given the $79 billion odd dollars in research and the billions of dollars bet on the models, it seems hard to believe. Then again, the same team didn’t ask any hard questions when one study overturned hundreds of other studies that showed it was warmer 1000 years ago, they are the people who think it’s ok to hide declines, hide data and dodge FOI’s. This is, after all, the Team who call fertilizer — “pollution“. Maybe a couple of extra Watts per square meter could have slipped by?

When a greenhouse gas absorbs infra red, its molecules emit in a random direction — so half of its emissions  are emitted up, towards space. This is kind of the key to the matter.

George is an electrical engineer, and since I’m married to one I know that EE’s are used to dealing with complex feedback loops in systems. George uses the points we know — incoming solar radiation, outgoing radiation, the Stefan-Boltzman equation — and shows in a simple and logical fashion that the numbers all balance.

But once we have this un-obfuscated picture of radiation flows from George, we can see the potential for some double-counting going on in a crucial climate calculation.

Everybody who’s anybody in the climate calculations knows that if CO2 doubles, the IPCC reckons that it is supposed to be equivalent to adding 3.7 W per square meter of net extra incoming solar energy (which means “heat”) to Earth’s big budget. Of course, adding extra CO2 to the atmosphere really just reduces the amount of radiation out to space. The flow from the sun is not increased; the 3.7 W/m-2 increase in forcing is solely due to less radiation leaving the earth.

The 3.7 W/m-2 is calculated from line-by-line spectral calculations, but does it correctly include changes to both the 93 W/m^2 going straight through the transparent window to space and the 146 W/m^2 absorbed by the atmosphere and then escaping to space?

The 1.2C no-feedbacks temperature increase from CO2 doubling is calculated by applying Stefan-Boltzman to the top of the atmosphere, where it is 255K: a surface around 255K has to warm by 1.2C if it is to emit the extra 3.7 W/m-2 required to keep the earth in radiative equilibrium when the CO2 doubles. We apply this at the top of the atmosphere because we can — we know the fluxes there and all the heat flow is by radiation. But we really want to know the change in temperature at the surface — a very different, and messier, situation. Obviously the radiative flows at the surface are only changed by about half as much due to a CO2 doubling, so presumably only about half the full 3.7 W/m-2 applies to change the surface temperature.

Like Judith Curry (see her blog, Part I and Part II), we think the calculation of a 1.2C warming for CO2 doubling  is opaque and uncertain, and open to challenge. On the face of it, it may well be half that, around 0.6C. (And it’s not like those who aim to alarm us, ever exaggerate or hide behind obscure and unexplained data or calculations, is it?)

The flow-on effects of this would run rampant through the scenarios and projections. Instead of causing 1.2 degrees C of direct warming (as per Hansen et al 1984), doubling CO2 would only lead to 0.6 C, and all the feedbacks apply to that.  So the “average 3 or 4 degree” estimate for the mass of climate models comes back to 1.5 – 2 degrees, and the skeptical view, which points at empirical evidence for negative feedbacks (Lindzen and Spencer) would roughly halve the 0.6C which makes 0.3C, and that converges nicely with the Miskolczi estimate of around 0.24 C.

Evolution of an Energy Budget

There’s 341.5 W/m2 of average incident solar power and the average albedo is 0.3, so 239 W/m2 arrives at the surface and 102.5 W/m2 is reflected into space.  Any solar power absorbed by the atmosphere will have half directed back into space and which is considered as incremental reflection and included in the albedo.  That returned to the surface is included in the 239 W/m2 .  Both the solar constant and the albedo are measured and uncontroversial.

For calculating the effects of clouds on the net  transmittivity, T, clouds are considered as act as dynamic ‘plugs’ that reduce the amount of surface power that leaves the planet.  Thus emitted cloud power is considered to be obstructed surface power in the present, even though the actual joules of emitted power originated from the surface, or possibly the Sun, in the past.  All of the values that went in to computing T are measured values.

Now examine the top of the atmosphere and consider the Conservation of Energy constraint that the power leaving must be equal to the power arriving.  This requires that the atmosphere radiate 146 W/m2 to maintain balance.

Now, subtract the power leaving the atmosphere from the power entering to determine how much power is being returned to the surface.  This is 146 W/m2 , the same amount that is leaving the top, making the fraction of power up to power down equal to 50%.

This shows how to obfuscate this view of the radiative balance to look like Trenberth’s.

First, take 78 W/m2 of the solar power incident to the surface, absorb this by the atmosphere and return this as ‘back radiation’.

Next, add 97 W/m2 of latent heat and thermals from the surface to the atmosphere and then return this as ‘back radiation’.

When you add these return paths, we get 321 W/m2 of ‘back radiation’, which is close to Trenberth’s value of 333 W/m2 , although he also uses a slightly higher surface temperature and a smaller atmospheric window.

The key point to notice is that the non radiative components of the Trenberth energy budget are irrelevant to the radiative balance.  Whatever is added to the atmosphere must be returned to the surface in equal and opposite amounts.

This particular picture would be exact if the planet had no water and all atmospheric absorption was by GHG agents that absorb only LW IR.  Adding water to the equation doesn’t change the balance, but does set up additional circulation currents between the water in the oceans and the water in the atmosphere. This is often confused as being fundamental to the balance, when it’s not.

We’ll be posting more follow up on this topic from George soon.