NEWS: The Thompsons received notification yesterday that they will be evicted on October 15. They ran a popular, profitable business, broke no laws, and received no infringement notices related to their stock numbers.

UPDATE #2: See below for the most useful thing you can do if you want to help them.

Here is a key point people have asked about in comments.

What about the community? How do the people of Narrogin feel — do they want the farm to stay? 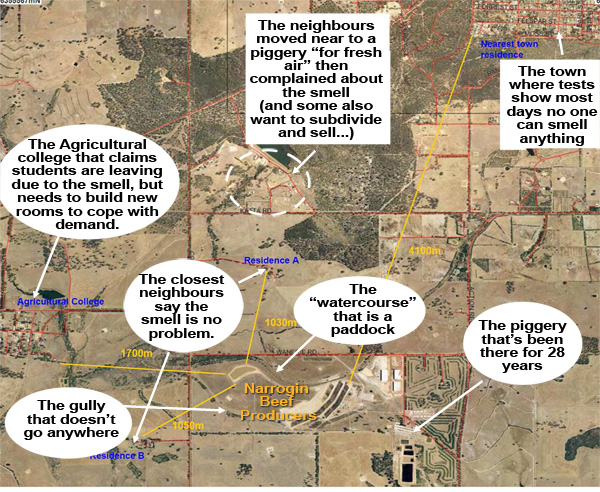 The layout of the surrounds, the town, and various complainants. References to the watercourse and gully relate to the need for a license. (Can you see a waterway?)

Narrogin is a town of around 5,000 people.  900 people signed a petition in support and the two nearest neighbors want the feedlot to stay. They don’t just agree the feedlot should run at 10,000 head, they put their names to 15,000. People give Matt money in the street, the complainants live further away than some strong supporters, and the piggery was operating right next door for all those years. The Shire has written to the DEC urging them to allow the business to operate.

In April 2007, when the feedlot was running at its peak with 10,000 cattle,  884 people signed a petition in support of The Thompsons:

We the undersigned residents of the Narrogin District hereby support Matt and Janet Thompson in their bid to complete their cattle feedlot development to a capacity of 14,490 head. We appreciate the benefits that this business brings to our community, and we believe the Thompsons will continue to make improvements which will minimize nuisance issues.

Matt tells us people in the street hand him $50 notes and tell him to keep fighting.

The local government authority which is the Shire (like a county) has supported us and appealed our license on our behalf on numerous occasions. Individuals have appealed on our behalf and signed petitions in large numbers. DEC does not consider positive comments or submissions. People in town have offered us their homes, their cars, and brought us food. Walking through the streets of town people have handed me fifty dollar notes and told me to keep fighting.

We do have our opponents locally but they are a very small group, and we have many many friends who have bent over backwards to help us in our time of distress.

Both of their two nearest neighbors want them to stay and increase their cattle numbers:

To whom it may concern,

their project up to 15,000 head as originally approved.

My property is immediately west of the feedlot and I have lived here for 4 years.

consider normal for a rural area.

product that has helped me manage my small farm in a responsible and more efficient manner.

It is good to have this enterprise in our local area. The Thompsons employ local

people and they are active participants in the Narrogin area. The economic impact of this business is substantial with local farmers being able to sell their products.

I don’t think that this economic benefit has compromised the environment in any real way, and I hope the Thompsons are able to stay in business as I know that they have been significantly affected by not being able to operate at full capacity.

I wish to record our support for the Narrogin Beef Feedlot. Our farm of 250 hectares  is situated next door…

For the past four years we have been recycling manure from the feedlot on  our crops and pasture with very good results. This fits in well with our farming policy of not using chemicals whever possible.

I realise there have been problems of odours from the feedlot in the past, however we have not been unduly affected and especially for the last 12-18 months have rarely noticed any odour.

We think of Matt and Janet as good neighbours, and have always found them civil and helpful people to deal with.

Our hope is that the feedlot will operate in the future as a sound and profitable business.

Shire president Richard Chadwick wrote to the DEC urging it to sort out the license issues as quickly as possible.

…the DEC did not have sufficient justification for the forced destocking to 6,000 head. The license must allow for the keeping of up to 10,000 head.

Any delay will surely see the demise of this business which will be a tremendous loss to our community.

There is a very real fear that this business may not survive this current situation and will be lost to our community.

It was chaired by none other than Barry Carbon, who I believe wrote the 1986 EPA legislation.

… the Chair of the LCCC recommended approval be given for the feedlot to operate at 10,000 head.

In a letter from the Chairman of the LCCC to the Director General of the DEC dated 13 May 2009, it was stated that “comparison here has a large number of observations taken over a long time, and the improvement from this year to last is obvious.”

The evidence shows most days there is no odour detectable in the town.

The complaints don’t correlate with stock numbers on the feedlot, and over 6,000 recordings were taken in the town. See my post on the empirical evidence.

Could it be about money and not the environment?

The local real estate agent points out that land values in the area are rising just like everywhere else and there is no evidence the feedlot has affected land prices.

Some of the complainants have applied to get their property rezoned so they can subdivide and sell. They live further north from the Thompson’s farm than the Furnesses do. The smells of the farm apparently jump right over the Furnesses farm…

Here’s one vocal complainant asking for rezoning – see page 13. Point 59. The Gows bought the property in 1995, close to the piggery that has been next to the Thompson’s and has been operating for 28 years.

An application has been received from Mr & Mrs Peter & Karren Gow requesting Council to support the rezoning of Lot 2 Katta Road, Narrogin from ‘Farming’ to ‘Special Rural’ in the proposed new Town Planning Scheme.

The comments are open here (and on all the threads) and dissent seems to be limited to a small group of vocal complainants.

I’ve put together a one page central spot for links to all posts and info.

I’ve almost finished the documentation on the Thompson’s story. As a case-study of what we might all face if  the powers of government continue to rise unchecked, their story begs to be told. Information is our friend, hence my aim is to make the facts available. (I don’t quite know why it’s me that seems to be telling it.)

Where are the young idealist lawyers who want to carve a name for themselves?

Where are the legal action blogs?

UPDATE #2: There is a Meeting with Bank CEO next Wednesday

John CA writes from a note on WUWT

There is a small glimmer of positive news. A few politicians have come on board to advocate for the Thompson’s cause and to try to mediate with the NAB (National Australia Bank). This coming Wednesday (September 28), a meeting has been arranged between this group of Politicians & Cameron Clyne the CEO of NAB.

Matt & Janet appeal to you not to get into a bank bashing frame of mind. This whole sorry saga has been caused by environmental extremists and more specifically the DEC.

Matt believes that he owes the NAB the balance of the loan. Narrogin Beef Producers can repay this loan if they are allowed to operate the facilities at full capacity and without ridiculous arbitrary compliance clauses imposed upon them that no one else has to meet.

Matt & Janet appeal to the NAB to support them against the DEC so they can be productive members of the community & pay back their creditors.

Matt & Janet need your help to send to the CEO of NAB a simple and polite message:

• Talk to the Thompson’s mediators,

• Give back all the files

Just a thought, if you’d like to help the Thompsons by contacting Mr. Cameron (CEO of National Australia Bank) — consider a single petition signed by as many as possible in the Town and Narrogin Shire. There are only about 4,500 people minus children so this shouldn’t be difficult.

The petition should be formal, business like, and NOT inflammatory or it wouldn’t be taken seriously.

DEC doesn’t consider the support of the community to be of merit but Mr. Cameron (CEO of National Australia Bank) does and will take the petition very seriously.