SPPI has put out an excellent collection of papers in response to NOAA’s State of the Climate Report. 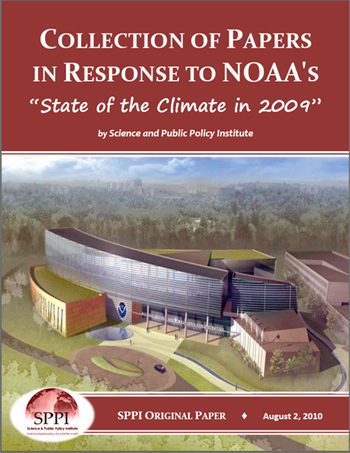 NOAA State of the Climate reply by SPPI

..
As usual, the official taxpayer-funded report is full of half-truths and strawmen. Arctic sea ice is shrinking (no mention of the Antarctic), the world is undeniably warming (yes, so? what’s causing that warming?). There’s the compulsory allusions to “consensus” — 300 scientists, blah blah blah (trust us! we’re experts).

The interesting thing is that the seven different responses are all quite different, yet all skeptical, even though there was no coordination behind the scenes to create that. There are so many holes in the NOAA document, that seven commentators could fire ad lib, and for the most part, all find different targets.

Has the temperature been constant ’til humans industrialized?

Craig Idso noticed that NOAA actually said “people have spent thousands of years building society for one climate and now a new one is being created — one that’s warmer and more extreme”. So NOAA is rewriting history too. The Vikings were never forced out of Greenland due to the nasty cold spell called the Little Ice Age. Glaciers have never shrunk before, the sea has been constant for thousands of years, and the ice cores and boreholes around the world were “dead flat” at 15 degrees C for 5000 years? Don’t think so. Idso has collected hundreds of peer reviewed papers just on the topic of the Medival Warm Period, almost every one of which supports the idea that that o-so-recent period was warmer than now.

The Propaganda, it would seem, is full-gloss-government-funded-glamour and not just packed with half-truths, it steps into the realm of outright lies. The report claims that each of the “more than 30 different climate indicators” it has analyzed “is placed into historical context.” But it’s not the historical context that’s backed by empirical evidence.

Are sea-level rises accelerating? No sir.

There is no significant increase in [in the rate of ] sea level [change] over the past century*. In 2007 S. J. Holgate of the Proudman Oceanographic Laboratory, Liverpool, UK, showed that the rates of sea level change observed over the past 20 years were not particularly unusual when compared to nearly continuous sea level records around the world for 1904–2003.” It was published in Geophysical Research Letters, vol 34, 2007. His research demonstrated that “The rate of sea level change was larger in the early part of last century in comparison with the latter part.”

250 years of warming but not so not much lately:

David Evans focuses on why government agencies are doing a conspicuously poor job with land thermometers (and “yet” the scare-campaign loves them), on Argo ocean measurements, and on the wild mismatch between the global temperature trend of the last few centuries and human emissions (which have nearly all been since WWII, half since 1975, a quarter since 1995):

“Global temperatures as measured by our best and least biased means, satellites and the Argo network, have been flat to slightly down over the last decade. Consequently, the bandwagon built around the theory of man-made global warming is stalling. The 2009 State of the Climate report is an attempt by climate authorities to browbeat the public and politicians.

“The 2009 State of the Climate report is just another authoritarian attempt to hoodwink the public, hiding behind complexity and apparent “expertise”. If the report was really trying to explain what was going on it would have been simple, direct, easy to understand, it would have included satellite temperatures and Argo results—and it would have admitted, as leading warmist Dr. Phil Jones, Director of the Climate Research Unit at the University of East Anglia in the UK, did recently on the BBC: “from 1995 to the present there has been no statistically-significant global warming”.

A carefully thought out logical dissertation? Not so

Christopher Monckton lists the assertions required to make the NOAA report make sense, and demolishes them. He sums up the report:

“This is a blatantly false claim as can be seen using NOAA’s own data as compiled by Rutgers Snow Lab.
The winter snow was claimed to be in decline. Here is the Northern Hemispheric data yearly since record keeping began in 1966. There is no trend (0.0/year).”

Thanks to John Brookes in comments below for pointing out that this paragraph should read “no significant change in the rate that sea level is rising”. Obviously sea-levels are rising, and have been since 1860 or so. Dennis Ambler is referring to this research below and writes:

“His research demonstrated that “The rate of sea level change was larger in the early part of last century in comparison with the latter part.” Mean sea level rise was 1.74 mm per year, or just under seven inches for the whole century. “”