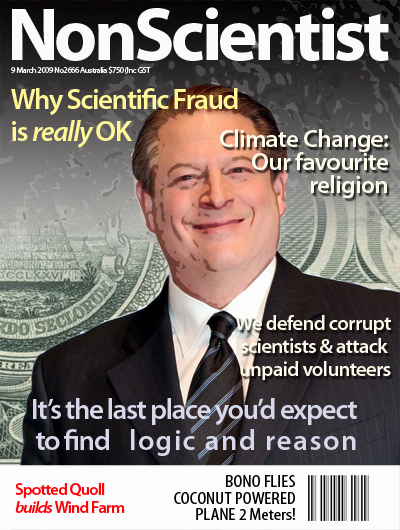 You might think journalists at a popular science magazine would be able to investigate and reason.

In DenierGate, watch New Scientist closely, as they do the unthinkable and try to defend gross scientific malpractice by saying it’s OK because other people did other things a little bit wrong (that were not related) a long time ago. Move along ladies and gentlemen, there’s nothing to see…

The big problem for this formerly good publication is that they have decided already what the answer is to any question on climate-change (and the answer could be warm or cold but it’s always ALARMING). That leaves them clutching for sand-bags to prop up their position as the king-tide sweeps away any journalistic credibility they might have had.

I’ve added my own helpful notes into the New Scientist article, just so you get the full picture.

NS (New Scientist): “Climategate” has put scientists on trial in the court of public opinion.

NS: If you believe climate skeptics, a huge body of evidence* involving the work of tens of thousands of scientists over more than a century…

JN: I’d hate to exaggerate, but the IPCC can only name 60 scientists who reviewed the evidence on causation in the Fourth Assessment Report, and most of them were either reviewing their own work, had a vested interest, or are themselves caught up in the Climategate scandal …

NS: –should be thrown out on the basis of the alleged misconduct of a handful of researchers, even though nothing in the hacked emails has been shown to undermine any of the scientific conclusions*.

JN: Nothing?  So for New Scientist, it’s normal practice to refuse to provide data, refuse FOI’s, and then delete data?  Maybe this is the normal practice for a religion, but it sure isn’t normal for science.

And spot the appearance of the mythical “HUGE body of evidence”.  Can anyone at New Scientist find that one mystery paper with empirical evidence showing that carbon causes major warming? Just ONE?  That’s major warming, not minor.  And that’s empirical, i.e., by observation, not by simulation.

This is the paragraph where New Scientist proves it has become Non Scientist:

“If we are going to judge the truth of claims on the behavior of those making them, it seems only fair to look at the behavior of a few of those questioning the scientific consensus. There are many similar examples we did not include. We leave readers to draw their own conclusions about who to trust.”

Alarm bells are ringing from Galileo’s grave. We’re trying to figure out if the world is warming due to man-made carbon right?  New Scientist’s method is not to look at the evidence, but to look at the behavior of the sceptics.  Did you see the black hole of ad hominem that this once esteemed journal just stepped into? Logic and reason were reduced in a flash to a naked singularity. Follow its reasoning through the black hole, and you don’t emerge on the other side.

Did you see the black hole of ad hominem that this once esteemed journal just stepped into?

Who to trust indeed?  Let’s trust people who can reason, and scientists who don’t hide their data.  It doesn’t matter how “sceptics behave”; it matters whether the data can be independently analyzed and interpreted; whether the conclusions are robust.  But, since the data is g o n e, no one can verify anything. So in a way, it does come down to “trust”: In the new quasi-religious form of science, you have to trust those who hold the global data. Isn’t postmodern “science” an awful lot like the old religions?

Did they make the right “adjustments”?  Who the heck knows?

So does New Scientist publish the most significant emails to let readers make up their own minds, or do they hide the damning lines, and feed in some old distractions they found in a festering mess of bias called the New Scientist Archive? Choose B. Go for an eighteen-year old paper by people not mentioned in the hacked emails. Of course. Then have another go at a science documentary that didn’t mention the hacked emails, but got part of a graph wrong. (And don’t mention that Al Gore’s movie made nine significant errors as determined by a British Court.)

New Scientist is attacking the 31,000 volunteer scientists, while it defends the 60 corrupt paid ones.

Then, take another swipe at the  unpaid scientists who arranged a petition that attracted thousands of signatures.  New Scientist briefly notes the latest version of this petition, but since they really can’t find any flaws with this new version, which has an astounding 31,000 signatures on it, New Scientist spends several paragraphs on the earlier version, which could have been done a bit better, but was obviously mainly right, as shown by the second round… Remember the petition was done by volunteers and done twice. It’s the largest grassroots movement of scientists on any topic anywhere in the world, and New Scientist is attacking the 31,000 volunteer scientists, while it defends the 60 corrupt paid ones.

It’s beyond silly. The mindless irrelevant attacks go on. They attack Nigel Lawson for using a misleadingly short time — eight years — to argue that the world is not warming (which is exactly what the satellite data shows). Eight years is too short for New Scientist to announce a flat trend, but in every other article with a single flood, a single cyclone, or a single heat wave, one week is long enough for New Scientist to imply that global warming might be to blame.  So a season of hurricanes is significant, but years of cooling is misleading.  Righto.  (And Amen!) 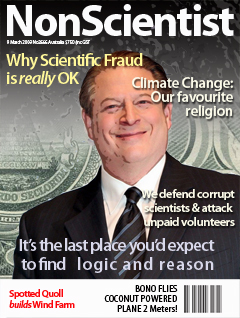 They attack Christopher Monckton’s paper, not because they can summarize why it was in error, but because another group disagree, and there are some technicalities of whether it jumped through the right hoops to be called “peer review.” Attack the man and not the message eh? New Scientist stands up for the bureaucratic details of “peer review” (only some peers count), but they won’t stand up for the independent scientists, the whistleblowers who want access to data, just to check those “peer reviewed papers” didn’t turn out to be baseless frauds like the Hockey Stick.

We subscribers buy New Scientist in the hope it will impartially give us both sides of the story in a summary form that is accurate….  And the subscribers are rebelling.  The commenters below the article are 90% skeptics, 2% believers, and the rest are presumably so angry their comments were deleted.

I think it might be time to form the New Scientist Action Group — one where subscribers and former subscribers think of ways to rescue this once great magazine from itself.

Is there any excuse? New Scientist tries them all.

* New Scientist claims nothing in the hacked emails (which might have been leaked) is of any concern and they link to this article. Here they at least manage to stick to the topic of ClimateGate – but the reasoning amounts to saying that the scandal is OK for a litany of excuses that don’t add up:

It’s too easy.  If you are a “CO2-is-the-cause-of-global-warming” scientist, there is nothing you can do that is outside the bounds of normal science. New Scientist will defend you.

The scientists caught by ClimateGate may have influence over New Scientist. From Watts Up (thanks Anthony).

In comments, Keith Minto points out the New Scientist is listed in the Climategate e-mails

yep, I’m watching the changing of the guard live on TV here!

New Scientist was good. Gavin and I both had some input into that. They are nicely dismissive of the contrarians on just about every point, including the HS! (Hockey Stick)

Commenters have been asking for larger files for printing, and I’m happy to help.  Let me know if you need something bigger.  It will be arranged. 🙂