Finally, Part II in the Skeptics Handbook series – the bluster and bluff, the deceit, and the money.  Enjoy & Share. 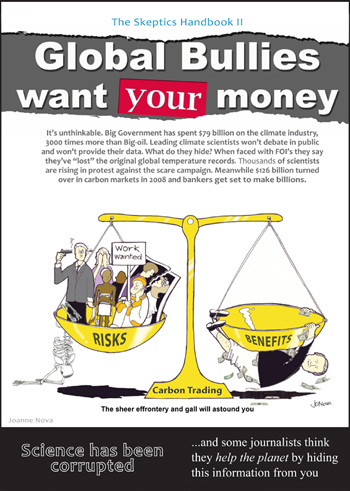 It’s unthinkable. Big Government has spent $79 billion on the climate industry, 3000 times more than Big Oil. Leading climate scientists won’t debate in public and won’t provide their data. What do they hide? When faced with freedom-of-information requests they say they’ve “lost” the original global temperature records. Thousands of scientists are rising in protest against the scare campaign. Meanwhile $126 billion turned over in carbon markets in 2008 and bankers get set to make billions.

“Bullying is their root strength. Take it away from them and they will crumble.”

Full color copies are being printed right now so that all Australian Senators and crucial people in the Australian Government can have this in their hands next week. They will be hand delivered by former politician, who is flying to Canberra specially to get the booklet into the hands of our decision makers. The Australian Senate is considering the legislation starting on Monday next week. It’s line-ball. The Leader of the Opposition wants to pass it, most of his party do not. Only seven members of the opposition need to vote for it for it to pass — and condemn Australia to decades of an unnecessary tax and an impost that will achieve nothing but banking profits.

Thousands of copies will be printed in the  next two weeks in Australia, and be distributed to journalists and other leaders.

I welcome your feedback and ideas, especially this weekend before it goes to the printers.

Acknowledgments: Thanks to the invaluable team behind the scenes who have given me feedback and suggestions: Anne-Kit, Kruegar, Brad J, George W, Tel, Daniel C, Terry D, Max R, Bryan L, John N and of course David E 🙂

Also part of the team were the people who helped to cover costs of the website, software, printing and childcare. Merci. Without this help, I could not have produced this in time for the Australian Senate and Copenhagen and been able to offer it freely to the rest of the world. I am grateful.

TURN THE PAGES OF THE HTML VERSION (Links will become active as pages are published).

PRINTED COPIES ARE AVAILABLE
If you want one or more The Skeptics Handbooks to point at with friends, or to strategically give away, you can order them here for: Australian deliveries, and here for International Deliveries.