Mohib Ebrahim, who has created timelines for professional exhibitions, has now produced one of the ClimateGate scandal, providing graphs, e-mails, history, and analysis of events. This is the second edition, thoroughly edited and revised.

Click here if you prefer a GIF version of the poster (1.8Mb)

To print a poster, check-out the sizes below, each with reference pages. As needed, the timeline will be updated and expanded. This is its home, so check back here for new editions and comments. And please link to this page here so people will always get the updates and all the versions.

A software architect, Mohib Ebrahim designs graphic timelines as a hobby. As an amateur astronomer, he has always been an AGW skeptic because of synchronous warming on neighbouring planets. A few years ago, he read Michael Chrichton’s State of Fear, and learning about many AGW issues, began his own investigation.

With the Internet release of the CRU e-mails last November, Ebrahim started work on a visual presentation setting out who, what, when, where, and how. Though this timeline was intended only for himself, he soon realized it could be of use to others, and decided to go public. The first on-line edition, a mostly unedited draft, was well received, and described by Rick Lippincott, an executive at the Society for Technical Communication, as possibly “one of the best visual representations of complex data since Charles Joseph Minard prepared [in 1861] a graphic charting Napoleon’s march to Moscow.”

If you want a copy to read at home, a reduced format works best.

The timeline can be used non-commercially free of charge. If you publicly display it, please drop Mohib an e-mail (timelines at sent.com) indicating where. We would also appreciate photos, if available, to put in our gallery. If you’ve already displayed the timeline, we’d love to hear about the reactions it has generated!

You can print a full size banner (see download links above) 2.3m (94 inches) long and 80cm (34 inches) wide, the equivalent of two A0 landscape pages.

Exhibition murals should be printed at 200% size, and can be read from a distance of three feet.

Use Adobe Acrobat (not Acrobat Reader) to scale and tile the PDF banner for printing on other paper format and/or different scales.

BLACK AND WHITE BANNER A black and white banner can be printed for just $18 at Kinko’s. Thanks to Tom Moriarty of ClimateSanity for this information and photo. Here’s his poster pinned up outside is office cubicle (right).

Tom's banner of the ClimateGate Timeline

FULL SIZE COLOUR BANNER
Below, see Brenton’s dedicated effort to put together the dozens of A4 pages. 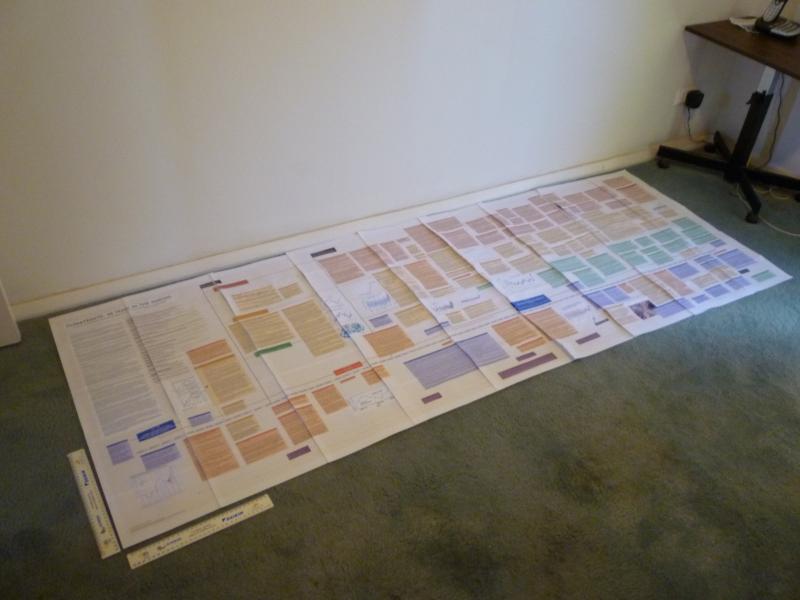 Brenton's full color print of the ClimateGate Timeline. Below, see Brenton's dedicated effort to put together the dozens of A4 pages.

INTRODUCTION FROM THE TIMELINE

A STORY OF INTRIGUE, DECEPTION AND SECRECY

On November 17, 2009 some 3,000 e-mails, software files, and other documents from the University of East Anglia’s Climatic Research Unit were covertly released onto the Internet. In his November 28, 2009 telegraph.co.uk article “Climate Change: This is the Worst Scientific Scandal of Our Generation,” Christopher Booker summarized the far-reaching ramifications of what was exposed in these documents:

The reason why even the Guardian’s George Monbiot has expressed total shock and dismay at the picture revealed by the documents is that their authors are not just any old bunch of academics. Their importance cannot be overestimated, What we are looking at here is the small group of scientists who have for years been more influential in driving the worldwide alarm over global warming than any others, not least through the role they play at the heart of the UN’s Intergovernmental Panel on Climate Change (IPCC).

Professor Philip Jones, the CRU’s director, is in charge of the two key sets of data used by the IPCC to draw up its reports. Through its link to the Hadley Centre, part of the UK Met Office, which selects most of the IPCC’s key scientific contributors, his global temperature record is the most important of the four sets of temperature data on which the IPCC and governments rely – not least for their predictions that the world will warm to catastrophic levels unless trillions of dollars are spent to avert it.

Dr Jones is also a key part of the closely knit group of American and British scientists responsible for promoting that picture of world temperatures conveyed by Michael Mann’s “hockey stick” graph which 10 years ago turned climate history on its head by showing that, after 1,000 years of decline, global temperatures have recently shot up to their highest level in recorded history.

Given star billing by the IPCC, not least for the way it appeared to eliminate the long-accepted Mediaeval Warm Period when temperatures were higher they are today, the graph became the central icon of the entire man-made global warming movement.

Since 2003, however, when the statistical methods used to create the “hockey stick” were first exposed as fundamentally flawed by an expert Canadian statistician Steve McIntyre, an increasingly heated battle has been raging between Mann’s supporters, calling themselves “the Hockey Team”, and McIntyre and his own allies, as they have ever more devastatingly called into question the entire statistical basis on which the IPCC and CRU construct their case.

The senders and recipients of the leaked CRU emails constitute a cast list of the IPCC’s scientific elite, including not just the “Hockey Team”, such as Dr Mann himself, Dr Jones and his CRU colleague Keith Briffa, but Ben Santer, responsible for a highly controversial rewriting of key passages in the IPCC’s 1995 report; Kevin Trenberth, who similarly controversially pushed the IPCC into scaremongering over hurricane activity; and Gavin Schmidt, right-hand man to Al Gore’s ally Dr James Hansen, whose own GISS record of surface temperature data is second in importance only to that of the CRU itself. [16]

Writing in The Atlantic, Clive Crook is more candid: “In my previous post on Climategate I blithely said that nothing in the climate science email dump surprised me much. Having waded more deeply over the weekend I take that back. The closed-mindedness of these supposed men of science, their willingness to go to any lengths to defend a preconceived message, is surprising even to me. The stink of intellectual corruption is overpowering.” [159]

As Charlie Martin explained in “Global WarmingGate: What Does It Mean,” the e-mails suggested:

THE CLIMATEGATE TIMELINE AND THE TICKING TIME BOMB

To better appreciate these themes, this Timeline chart consolidates and chronologically organizes information uncovered and published about the CRU e-mails by many researchers (see references) to visually show who said or did what and when and, from simultaneous events, to understand the context in which events occurred. There is far more information than can be assembled in one place, and more continues to be uncovered, but some of the key material found to-date has been included.

Though many event boxes are important, perhaps two are most critical: one from 1981, and another from October 12, 2009 (both with bomb icons). The first sets out the shaky foundation underpinning the AGW (Anthropogenic Global Warming or man-made global warming) enterprise, and the second an admission of its failure. Together, they help explain why everything that occurred in between (as revealed by the CRU documents and independent researchers like Steven McIntyre) was inevitable to plug the holes in the leaky boat and keep up appearances. Consequently, as Terence Corcoran sets out in “A 2,000-page epic of science and skepticism,” disagreement and skepticism ran strife throughout the 13 years of e-mails [124].

The story that emerges is not of a smoking gun, but of a 30-year time bomb whose fuse was lit in 1981, when — despite only a handful of scientists supporting it — the AGW theory was championed, without question, by the Popular Press.

Given this foundation, it was only a matter of time before the growing divergence between real-world data and the AGW climate models, which had been considered beyond reproach, became self-evident and problematic. Offending data was massaged to fit the models to stave off questions and the losses that would ensue to the billion dollar climate industry: “$32 billion for climate research, and another $36 billion for development of climate-related technologies” by the US government alone. [131]

The data manipulation became so extreme that a CRU programmer tasked in 2006 with reproducing CRU’s own published results using its own models and data was unable to do so after three years. Releasing the data and computer codes behind the models for others to review and verify was out of the question. Though FOI requests are redundant for peer-reviewed research, the CRU’s refusal to release data and methods used for papers published in respected peer-reviewed journals, despite journal rules prohibiting such refusals, inevitably led to legal FOI requests, if for no other reason than that some scientists were insisting that the world commit trillions of dollars to economic policies based on what they claimed their research showed.

Lest there be any doubt that these scientists did anything wrong, Richard Lindzen, Alfred P. Sloan Professor of Meteorology at the Massachusetts Institute of Technology, explains what the CRU documents reveal: “They are unambiguously dealing with things that are unethical and in many cases illegal…” “[S]cientists manipulating raw temperature data….“ “The willingness to destroy data rather than release it. The avoidance of Freedom of Information requests….“ [66] Thus, while UEA and Pennsylvania State University said they were investigating the matter [69], the UK Met Office (which works closely with the CRU and relies heavily on its product) announced a 3-year project to re-examine 160 years of temperature data, signalling its own lack of confidence in its CRU-based record.

Data fudging and secrecy aside, by 1998, Earth had stopped warming and begun cooling, despite record levels of CO2 (large blue event box with a bomb icon). This divergence between AGW theory and reality grew so enormous that by October 12, 2009, Kevin Trenberth, in a fit of frustration, e-mailed his colleagues: “Where the heck is global warming?“ “The fact is that we can’t account for the lack of warming at the moment and it is a travesty that we can’t.” The reason he gave for their inability to account for cooling was that “[T]he data are surely wrong. Our observing system is inadequate.“ In other words, the findings indicating cooling were wrong, but the climate models, predicting warming, were correct. This, arguably, is the key revelation of ClimateGate. It makes self-evident that blind faith and bankrupt logic are now masquerading as rational science. No matter how much techno-babble is used to make today’s climate models sound impressive, they have all proved wrong. The hockey team scientists admit they have no clue why this is so, though other scientists do (see “Climate Corrections” [92]).

These problems would have been publicized years ago if the AGW theorists didn’t have powerful allies: policy makers in virtually every professional scientific body, editors of virtually every major scientific journal, and reporters and editors at virtually all mainstream media outlets. Few provided unbiased, impartial forums where alternate views and evidence were aired and debated. Instead, most took official positions, invariably with an air of authority, and spared no effort to ensure that voices against the artificial consensus were quashed by editorial fiat and a persistent campaign of vilification, intimidation, and ridicule.

Twenty-first Century science has borrowed a page from the medieval Church in using fear and persecution to silence skeptics. The oppressed have become the oppressors. Given that most professional scientific bodies and peer-reviewed journals have been active accomplices in this scandal, one wonders how many other “scientific consensuses” have been similarly engineered.