Winning: The new Supreme Court decision is much bigger than the climate wars

Over the last 50 years the Deep State Bureaucrats had become Rulers-defacto and finally the Supreme Court has put the hand-brake on. Instead of unelected agencies deciding national policy, the Supreme Court said, rather radically, that Congress should make decisions of great political significance. Sounds awfully like “Democracy”.

But as far as the Environmental Protection Agency sees it, if the voters are too stupid to elect the correct people, then Congress can’t make the right laws, so it’s up to the EPA to save the people anyway.

It’s what you do when you are Omniscient.

Or as another Ian says: they are only doing “what God would have done if he had truly understood the situation”.

The Editorial Board, Wall Street Journal

This has been an historic Supreme Court term, and the Justices kept it going to the end with a major 6-3 decision Thursday (West Virginia v. EPA) reining in the administrative state. The subject was climate regulation but the message should echo across the federal bureaucracy.

The question was whether the Environmental Protection Agency could invoke an obscure statutory provision to re-engineer the nation’s electric grid. Prior to the 2015 Obama rule, the EPA had used the provision only a handful of times to regulate pollutants from discrete sources. The rule would have effectively required coal and gas-fired generators to subsidize renewables.

The Major Questions doctrine sounds like “the big picture”:

Writing for the majority, Chief Justice John Roberts relies on the Court’s “major questions” doctrine. This requires courts to look with skepticism when agencies claim “‘in a long-extant statute an unheralded power’ representing a ‘transformative expansion” in its power. That’s what the Obama EPA did.

Apparently it’s not OK to play legal word games with old subclauses in order to make your agency more powerful, rich, and likely to get grants and Nobel Prizes.

The Court is now placing guardrails on Chevron to prevent lower courts from going off the constitutional road. Justice Neil Gorsuch’s concurrence, joined by Samuel Alito, is especially helpful in lighting the way for lower courts grappling with when and how to apply the major questions doctrine.

First, he writes, the doctrine applies when “an agency claims the power to resolve a matter of great ‘political significance.’” Second, an agency “must point to clear congressional authorization when it seeks to regulate ‘“a significant portion of the American economy.”’” Third, it may apply when an agency seeks to intrude “into an area that is the particular domain of state law.”

Contrary to their critics, the Justices aren’t blocking climate regulation. They are merely saying that the decision on whether and how to do it rests with Congress.

The EPA Gods are very annoyed

Everything about this response shows that Michael S. Regan, EPA chief, *knows* what is best, and democracy be damned — he will save those voters whether they like it or not.

“As a public health agency, EPA’s number one responsibility is to protect people’s health, especially those who are on the front lines of environmental pollution. Make no mistake: we will never waver from that responsibility.

While I am deeply disappointed by the Supreme Court’s decision, we are committed to using the full scope of EPA’s authorities to protect communities and reduce the pollution that is driving climate change.

At this moment, when the impacts of the climate crisis are becoming ever more disruptive, costing billions of dollars every year from floods, wildfires, droughts and sea level rise, and jeopardizing the safety of millions of Americans, the Court’s ruling is disheartening.

For tens of thousands of years, rain-dancing shamen said similar things. It was along the lines of Give me women and goats or there will be terrible storms. Now we have to chop down 120 million trees, or kill 200,000 bats, give up roast beef and then the WeatherMasters will give us nice weather.

The EPA just wants power over the national economy, energy systems, land, air and water. They already sound like they are a political party:

Ambitious climate action presents a singular opportunity to ensure U.S. global competitiveness, create jobs, lower costs for families, and protect people’s health and wellbeing, especially those who’ve long suffered the burden of inaction. EPA will move forward with lawfully setting and implementing environmental standards that meet our obligation to protect all people and all communities from environmental harm.”

Since when was the Environmental Protection Agency meant to create jobs, lower costs, and ensure US competitiveness, and if they can do that, who needs Congress?

Judging by the reactions this looks like a big win for voters. The Guardian, Nancy Pelosi, and Ginger Cassady of the Rainforest Action Network really don’t like it. Nancy Pelosi says the Court has “bowed to polluters who seek to poison the air our children breathe…“.

Meanwhile the Rainforest lady said it “condemns everyone alive today and generations to come”.

And Rolling Stone said everyone will go to hell, or something a lot like that…. 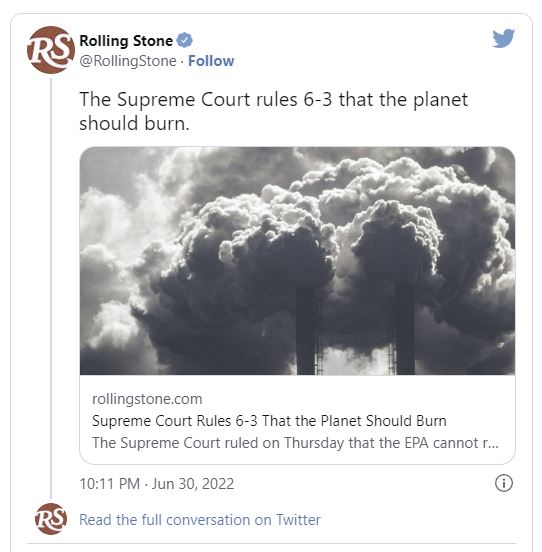