Given the advantage of controlling essential strategic resources, China would be crazy if they weren’t:

A report released Tuesday by Mandiant says a pro-China group named Dragonbridge has been using “nuanced tactics” against firms like Lynas, Appia, and USA Rare Earth. These included posing as local residents online to drum up protests against the construction of a Lynas rare-earths processing facility in Texas. The facility’s development is the result of an agreement signed between the US Department of Defense and Lynas to boost America’s rare-earths domestic industry.

“The accounts claimed that by placing the Lynas plant in Texas, the Biden administration would expose the area to irreversible environmental damage and the local population to radioactive contamination and adverse health effects such as cancer risks, gene mutation, and deformities in newborns,” the Mandiant report said.

Elaborating on its claims, Mandiant also shared several screenshots of purported sockpuppet Twitter and Facebook accounts dating from April and May that called for a boycott and shared concerns over Lynas and its rare-earths plant. Mandiant also found other “newly identified” social media accounts that were criticising Appia and USA Rare Earth, and which posted memes or links that were “known Dragonbridge content”.

“Many of the usernames consisted of English-language names followed by seemingly random numeric strings.”

“The private sector is now the victim of attacks by Chinese information operations which is growing increasingly aggressive,” John Hultquist, the Vice President of Mandiant Intelligence said.

” Information operations are typically a problem for civil society, governments, and platforms. They rarely target the private sector so directly and aggressively. This is a well-resourced campaign that’s grown significantly in size and scope compared to its recent activity in Ukraine.”

The effect of these particular protests doesn’t appear to be significant yet, but it suggests that China places great importance on controlling the supply of rare earths, that it doesn’t play fair, and that it’s quite likely that this goes on in other industries and public debates. 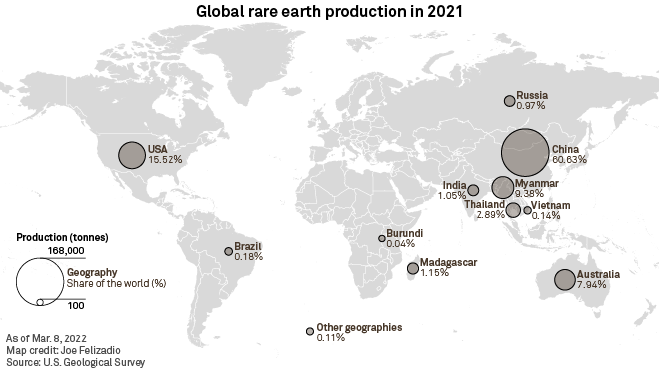 The US Dept of Defence has acknowledged the disinformation campaign and appreciates the diligence of Mandiant.

So how much of this goes on in the Climate debate?