Australia has no shortage of hot rocks, but it turns out to be harder to capture than people expected: 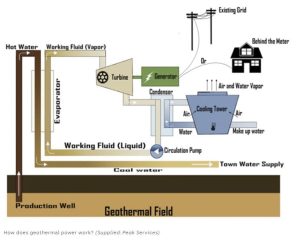 Seven years ago everyone was excited in Winton Queensland. The new Geothermal project would only cost $3.5 million but it would save “$15 million” in electricity bills over the next twenty years and “should be operational by the end of 2016”.

The renewable energy project was set to be the only operating geothermal power plant in the country and was touted as the start of a geothermal windfall in the region. But more than two years since construction finished, it has never delivered power and is not operational.

“It’s bloody disappointing, to put it mildly, for such a great potential for the water that comes into town,” Winton Shire Council Mayor Gavin Baskett said.

What went wrong? “Technical issues”. The ABC doesn’t get to the bottom of this, but the water was just not close enough to boiling.

Martin Pujol, principal hydrogeologist at Rockwater, said at 86C, the Winton project would have been one of the lowest temperatures globally used to produce electricity.

Who did those funding estimates?

In a concept design study, project manager Peak Services — which is owned by the Local Government Association of Queensland (LGAQ)— estimated that the council could save more than $15 million over the first 20 years of operation.

My favourite line from 2016: “We wouldn’t have pulled it on if there were risks.” he said.

The town hopes to salvage something from the town’s white elephant, and no one relishes this failure.

Ultimately, the man-in-the-street needs to know that “free energy” is everywhere but it’s not free to collect. People are being sold a field of dreams and fluffy hope.