All the rules are breaking. 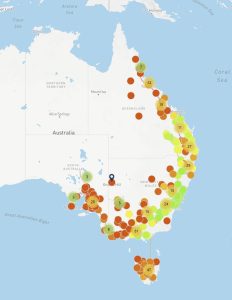 The price market broke on Sunday night and now the interconnectors rules are broken too. The whole Eastern five state “National” grid is flying seat of the pants — the reserves are so incredibly thin that there are LOR3 forecasts — meaning Lack Of Reserve Level 3 rolled out for all five states. It doesn’t mean blackouts will happen, but it means all the protective layers of this onion are gone. The system is running bare.

UPDATE: There were some blackouts in Sydney’s northern suburbs last night. “Millions of homes” were apparently told to conserve their power in Brisbane and Sydney. Welcome to RenewableWorld!

The price market broke on Sunday night when for the first time the AEMO imposed somewhat anachronistic price setting clauses it had never used. By fixing the wholesale price in Queensland, market bidding suddenly phase-changed into a twilight world where prices were set too low (at an obscenely high $300/MWh, but not high enough now), and generators didn’t want to bid. So offers to supply “Yo-Yo’d” and the AEMO had to run emergency orders of a different kind to force generators to run. In days to come, some bureaucrats will work out later what they should all really be paid post hoc after their compensation claims are filed. The Administered Pricing in Queensland quickly spread to NSW and Victoria and South Australia.

It’s not 100% clear how thin actual generation reserve is, or how much the crisis is due to generators not wanting to bid at these prices. Even the lawyers are busy. The Australian Energy Regulator (AER) has sent out letters to all the generators today reminding them they have an obligation to provide electricity generation and play nice, and they must not omit intentionally or recklessly anything that might contribute to current (ahem) circumstances.

Last night, the AEMO got through the night (in Queensland)*. But to avoid blackouts the AEMO broke its own rules on interconnector flow to allow some energy through to Queensland. The interconnectors are normally limited by automatic equations which are designed to stop a situation like the total Black-State-SA that occurred in 2016. As I understand it, states need enough reserve power so that the largest single generator can go kaput and trip out without also causing a cascading system collapse. Last night things were so on-the-brink that Queensland didn’t have that reserve. Someone in central control had to override the protection formulas to allow megawatts from NSW to sneak through to Queensland, even though it meant that last layer of protection against a system black was stripped away. Bare knuckle stuff in the control room. It’s fine as long as everything works.

Graphs that show the market is broken

Here the forecast price for the whole of NSW is a blistering $15,100/MWh for nearly every single minute of the next 24 hours, but the actual price is coming in at the mandated $300.00. The Queensland graph looks almost exactly the same. There has not been a day like this…

All those solar panels at midday (with their subsidies) are reducing the price forecast to $12,855, whatever that means. 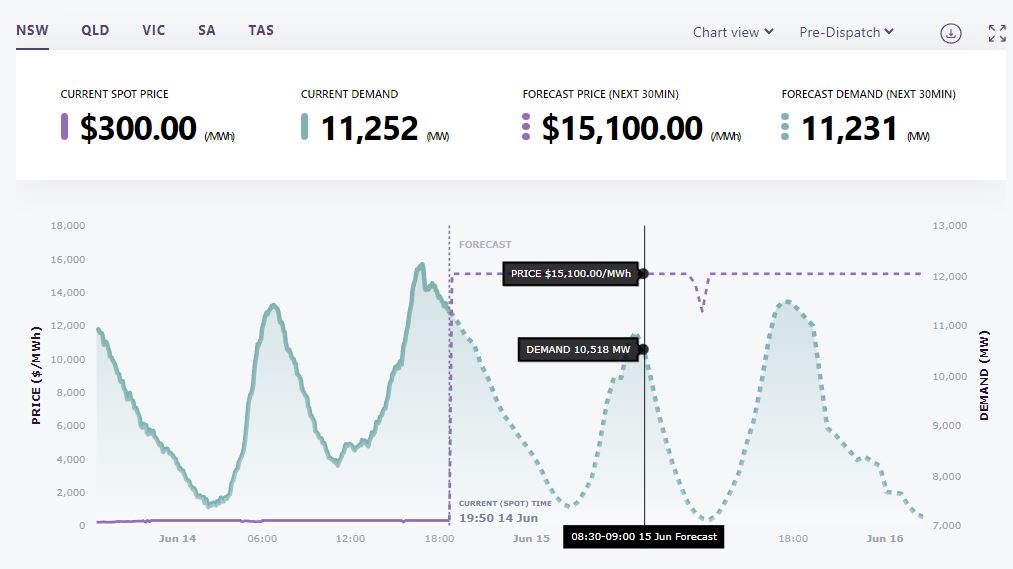 Teetering on the brink all night, and tomorrow, and in all five states

AEMO Market Notices are like a ticker tape parade. Queensland has warnings issued today running from 4.30pm right through to midnight. NSW is in trouble from 5pm to midnight. Loads that may be interrupted are in the order of 1500MW in both states, though both appear to have made it through the day’s peak load. Currently NSW sits at LOR2 (Lack fo Reserve Level 2) and there are forecasts of LOR2 for no less than 7 time periods tonight. Even Victoria is running thin enough that there is a warning of a 218MW forecast of load to be “interrupted”.

WattClarity is struggling to keep up with AEMO Market Notices. The pace is so blistering that dedicated market watchers missed LOR3 forecasts for Tasmania and South Australia — normally something that would be the most exciting news that year, but now, just another blip.

Similar warnings apply for tomorrow night in all three largest states in Australia.

Where is all that global warming?

Today’s peak demand for the grid was 31,200MW — a high reading for winter in Australia. It must be cold on the East Coast today, but luckily there was some 4GW of wind power (green band) which arrived today in time to keep things afloat for the evening peak. There was only 1GW of wind or less overnight last night. So cold windy nights are OK. It’s the cold windless nights that break the system. 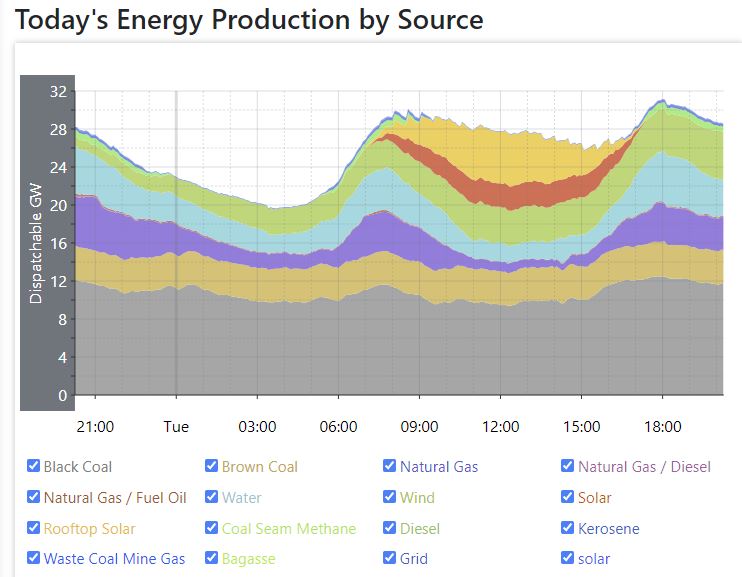 Total peak demand was 31.2MW which is high for winter.

For a couple of hours from around 6 – 8am this morning Queensland was importing more energy from NSW than was considered safe:

1)  NEMDE can’t find a feasible solution to dispatching the NEM for 07:10 this morning without ‘violating’ some constraint equations.

2)  This has the effect of allowing more transfers into QLD from NSW than what would be ordinarily considered safe to do so.

3)  However it comes with a risk … particularly, in this case, had Kogan tripped during this period we would have been a heightened risk of Voltage Collapse in the grid.

4)  Should this have happened, it may well not have been as ‘controlled’ as what might happen if this forecast LOR3 for this evening does not get resolved … rather, what might have happened might be more catastrophic, and longer to recover from (more like the SA System Black).

The graphic included in the post includes a data table with words like “Out=Lismore SVC, avoid Voltage Collapse on loss of Kogan Creek”“. Presumably this translates as we’re over-riding the normal requirements and if Kogan coal trips, the interconnector will load-shed Queensland, and the whole system goes down. (Hey but a “System Black” in Queensland is only billions of dollars and potentially a life and death situation for a few people.)

Various government agencies are currently reminding all the players that they have to play whether they like it or not. It’s a totally Soviet system now, with only the illusion of being a free market.

As an aside, for the true energy-nerds, it appears Australia doesn’t have much in the way of “pre-programmed” blackout capability to deal with this type of crisis. Those are called rather cutely, “Negawatts”. Wattclarity analyzes the Wholesale Demand Response during these extraordinary times, and finds that it essentially amounts to almost nothing. Apart from the two giant aluminum smelters in NSW and Vic that use about 10% of each state’s generation, there were only 12 units registered to provide “wholesale demand response” which is a big total of 59MW in a system that is currently drawing around 30,000MW.

Evidently, it’s harder to get people to voluntarily give up their electricity even when there are payments on offer.