Last month UK Ministers were warned that six million households could enjoy blackouts for dinner this winter. To try to stave off disaster, the UK Business Secretary has already written to the owners of the last three remaining coal fired power plants to ask them to stay running through winter. This is despite them being set to close in September.

Given the dire shortage of cheap energy, another plan is to pay British households up to  £6 for each kilowatt-hour they don’t use at peak time. While a normal kilowatt-hour would cost 28p, the blistering premium price shows how desperate the National Grid planners must be. The last thing they want is everyone to come home, turn on the oven and washing machine and plug in their scooters and EV’s at 6pm.

So now possibly in a grand experiment, as well as trying to control the weather with windmills, millions of families may try to reschedule body clocks somehow, eating later, doing laundry later, watching the melatonin-destroying blue-screens-of-insomnia after 10pm and running the drier while they sleep. Maybe it won’t be so bad, or maybe people will be more sleep deprived and less productive, fatter, or crash their cars on the A6 as they drive right over 200 trillion cubic feet of gas in Lancashire that could have easily kept the lights on. Hopefully the drier won’t catch fire at night.

Sometime 20 years from now, people at Oxford will get a nice grant to study what happened to the lifespan and health of the working class and the poor during the winter of the Energy Crisis. They may not find a conclusive link with house fires, car accidents, falls or school performance, but that’s OK, there’s always another grant for that.

Families are struggling with energy bills that have jumped by 54 per cent (an average of £693) this year.

It [National Grid ESO] is believed to have written to suppliers last week asking them to assess how much less energy their customers could be persuaded to use at peak times.

Ultimately everyone who uses electricity at dinnertime will pay more so other people can have less.

The cost of the scheme would be added onto energy bills but the National Grid is said to believe the additional charge would be less than the cost of paying power plants to increase supply. 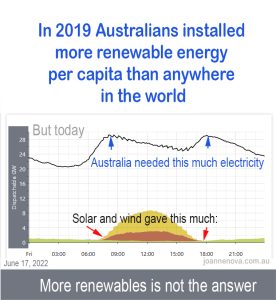 So let’s utilise that known for Centuries time of day and change the cost to a higher rate, eh!