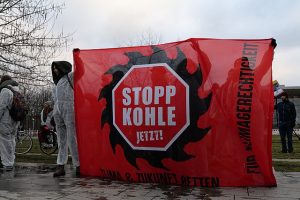 Suddenly the warning lights flashing in Germany. The message is to go easy on the gas, but ultimately even if the national storage tanks were completely full, the largest economy in the EU would only have ten weeks of gas without supplies from Russia. It’s summer and they’ve already hit stage 2 of the 3 stage emergency plan.

It was all totally avoidable. A wholly Green-made crisis. They could have gone nuclear, kept using coal, and explored for more gas and then they could have laughed at GazProm. Instead talk of rationing has already started, and the event horizon now includes the possibility of mass industrial shutdowns and recession.

Germany has been so suddenly crippled it’s almost as if an enemy force had infiltrated the activist soul and culture of the nation and duped it with a magic spell.

As long ago as 2014 a  former NATO Secretary General was warning that Russia was funding the anti-frakking mobs. It later came out Russia was also sending money through shell companies to Green protestors in Eastern Europe, and in the US too. Putin could hardly have believed how easy it was to turn young schmucks against their own civilization.

Teenagers without training are gift for enemies. If only our universities had taught them things that mattered?

Germany says that its citizens may have to ration the use of natural gas this winter as the country faces an energy “crisis” due to Russia reducing its supplies last week.

First the energy goes, then the economy:

Germany is facing a “Lehman Brothers” collapse in its energy market that could spark a domino effect leading to a severe recession should the gas-addicted economic powerhouse of the European Union be fully cut off from Russian energy supplies.

Economy Minister and Vice-Chancellor Robert Habeck said on Friday that Europe’s largest economy could be forced to shut down certain industries should gas supplies run think by the winter.

“Companies would have to stop production, lay off their workers, supply chains would collapse, people would go into debt to pay their heating bills, that people would become poorer,” he said according to DW.

The Green Party politician warned that there could be “a kind of Lehman-Brothers effect in the energy market,” spreading through municipal utilities, industrial and commercial companies, “And then you have a domino effect that would lead to a severe recession.”

Müller predicted on Thursday that the country could only live off reserves for less than three months without Russian gas over the Winter, saying: “If the storage facilities in Germany were mathematically 100% full… we could do without Russian gas completely… for just about two-and-a-half months and then the storage tanks will be empty.”