Tell the children: Energy is Power

And show them this graph. For twenty years the West has been giving up power. 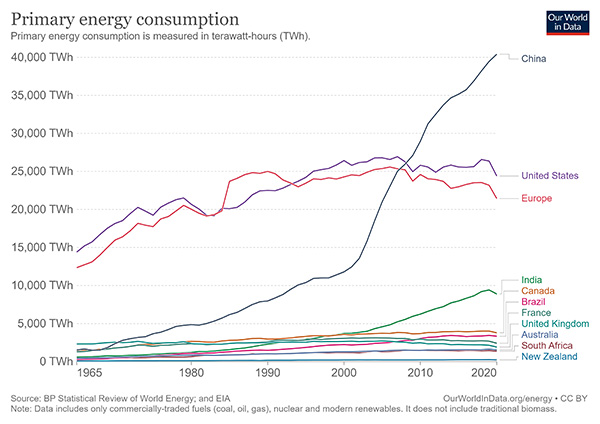 A warning from John Constable and Debra Lieberman,  Special to Financial Post

The energy of nations and the creation of wealth

Countries where energy consumption is plummeting don’t feel much pain … yet. And there is a good reason for that. One country is increasing its energy use, propping up Western consumption with exports and giving us a false sense of well-being. That country is, of course, China.

Since the West began its energy starvation diet, Chinese energy consumption has increased by over 50 per cent and its electricity consumption has increased by 200 per cent, overtaking the U.S. by a large margin. China, unlike the EU, U.K. and U.S., is still 90 per cent reliant on fossil fuels and nuclear. What’s more, only some of the immense wealth these fuels are generating is being exported. What is China doing with the rest? Time will tell.

But right now, as a matter of urgency, we must reverse the decline in Western energy quality and consumption by ending impoverishing renewable subsidies and clearing the path for fossil fuels and nuclear. Toying with low-density, thermodynamically incompetent renewables is an indulgence we cannot afford. With the Chinese economy on an energetically sound footing and those in the West not, the world has turned upside down. The economic consequences of this reversal are serious, the security implications terrifying. Our energy blindness is both costly and dangerous.

Energy demand is falling because of environmental policies, including subsidies to modern renewables such as wind and solar. As distasteful as this might sound, it is nonetheless true. So far, both the U.S. and Canada are relatively minor players, the U.S. having spent a mere US$125 billion between 2008-2018, and while Canadian national totals are lower, the province of Ontario alone is reported to have spent about US$30 billion in the period 2006 to 2014. But the EU, where the biggest energy collapse is observed, has spent a staggering US$800 billion since 2008, a total that has been increasing at $US70 billion a year. And the U.K., a country of 65 million people, is shelling out well over US$10 billion every year.

The intention of these subsidies was to reduce costs, but the gamble has not paid off — nor will it so long as Mother Nature and her laws of physics are at the table. Wind and solar remain stubbornly expensive for consumers in spite of a blizzard of misinformation and propaganda claiming otherwise.

Moreover, energy varies in quality, not just quantity. To support complex society a fuel must be of high quality, that is, structured so that it has the potential to do a lot of work. In thermodynamics, this is referred to as a fuel’s degree of “disorder” or “entropy.” Greater disorder equals greater entropy equals less work. But our “energy-blindness,” the inability to easily grasp thermodynamic principles, means that we must rely on physics to see — and what it reveals is that fossil fuels and uranium are highly ordered and rich in their potential to do work, making them cheap, while wind and solar are the reverse.

John Constable is energy director of the Global Warming Policy Foundation in London and author of its forthcoming study Europe’s Green Experiment: A costly failure in unilateral climate policy. Debra Lieberman is a professor of psychology at the University of Miami and author of Objection: Disgust, Morality, and the Law (OUP, 2018).