And the bonfire continues

As cold fronts sweep across the south east of Australia electricity prices are setting records nobody wants to set. The wholesale prices for electricity –across a whole month — soared past $300 a megawatt hour in three states of Australia. In NSW the cumulative cost of wholesale electricity for May alone worked out at $2.4 billion dollars. It’s enough to build a power plant. Back in 2015, before Hazelwood old brown coal plant closed and Australia installed more renewable energy per capita than anywhere else on the planet, the average price in NSW was $35/MWh. Back then it cost  $260 million for  the whole month. (And Hazelwood wasn’t even in NSW. ) The point is not about one coal plant, but about how recently the system still worked and how fast it fell apart. Hazelwood coal plant in 2017 was 53 years old and still selling electricity at $30 per megawatt hour when it was shut down. Since then the whole grid has so much more capacity yet so much less ability.  There’s no resilience left. A few speed bumps wiped out the whole road train. 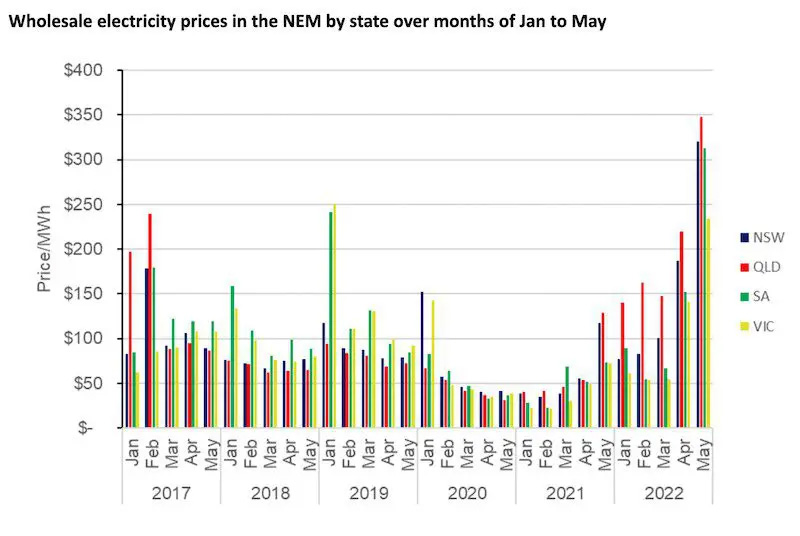 The graph comes from Tristan Edis at WattClarity who blames the current fiasco on coal and gas producers “selling at international market prices” saying it’s not a failure of solar or wind. But as Ben Beattie points out we’ve installed 3GW of rooftop solar in 2021, so getting the same power out of it in 2022 is hardly “success”. When the weather systems rained on the coal mines, they clouded up the solar plants. We’re now a weather dependent grid but it didn’t have to be this way. And in January the price of international black coal was $200 a ton  but Australian brown coal plants were still winning bids here in Australia at $22/MWh.

If only we had more brown coal plants in good condition?

The wind and solar plants ARE the vandals on the grid

The excess of random wind and solar at subsidized prices mean that cheap reliable providers get driven out of the market and we had no other alternative. It’s exactly what the Soviet-genius energy comptrollers were aiming to do. On top of that, the unloved baseload generators that haven’t been blown up  aren’t being repaired and maintained properly. Plus the expert climate modelers said that winter nights would be warmer and they aren’t, and coal was a dead asset, not a $400 a ton asset. And gas wasn’t worth exploring for and we’re a nuclear free zone. It was the same circle of brains that made all the wrong predictions.

When coal and gas hit bonanza prices, Australia should be reaping in the dough. If we had enough brown coal or nuclear plants to lighten the load on the gas and the black coal it would be fine. But we have no back up for the back up anymore. We just have back up for the renewables.

A sneak peak at June prices shows that things are a bloodbath. The average price for the first nine days of June is $440 in NSW and $520 in Queensland. (See the AEMO)