The Queensland grid is in crisis — the forecast price for nearly the entire next 24 hours is $15,000 per megawatt hour.

I have never seen a graph like this one. It’s a “white knuckle ride” as Paul McArdle describes it. The IRPM (or Instantaneous Reserve Plant Margin) is just 8%. “This shows total Available Generation of 31,679MW ready to supply aggregate ‘Market Demand’ of  of 29,201MW at this point … so a surplus of only 2,478MW NEM-wide.” But only last week there was a record day where the grid demand was 32,000MW — the highest winter demand day for years. 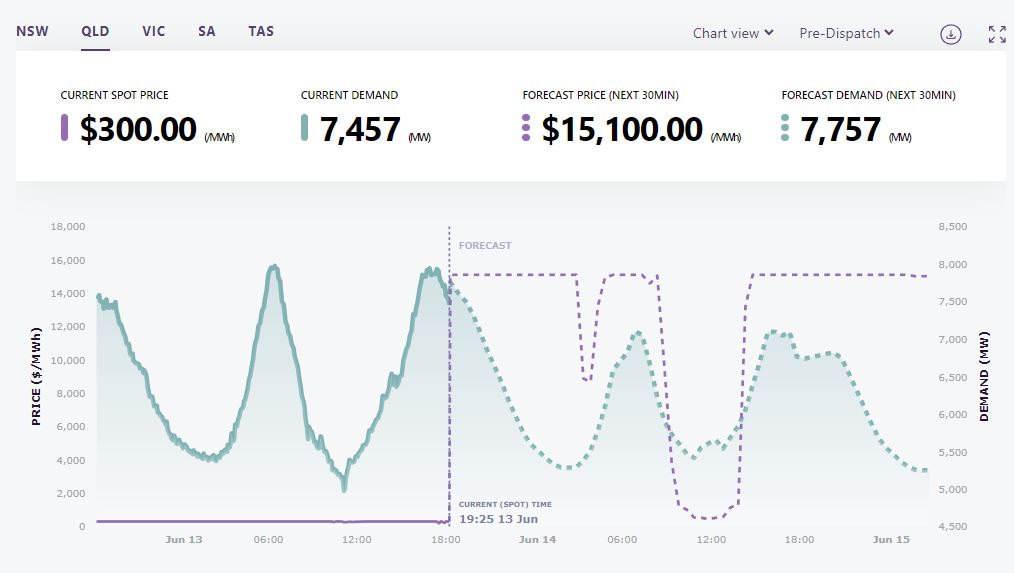 Reserves are incredibly thin, not just in Queensland, but also in NSW. 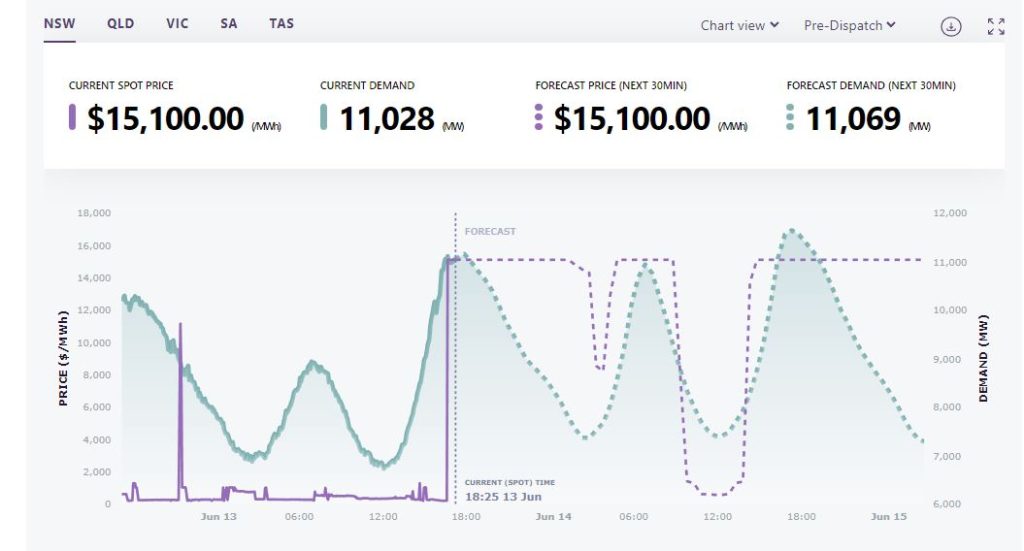 Market Notices from the AEMO are flowing like confetti. There is an Actual Lack of Reserve Level 2 (LOR2) in Queensland as of 6pm to 8pm. There is an LOR2 running for NSW as well, and an LOR1 for Victoria. If things shift up to LOR3 that means blackouts are likely, and LOR3s are forecast — in QLD tonight and in NSW tomorrow night. The margins are thinner than they look. Because extra generation on one part of the grid may be 3000km and an interconnector or two away from where it is needed. The interconnectors have complicated automated rules about flow to try to avoid black-state situations and to minimize prices. It’s not always obvious why they limit flows.

*** UPDATE: The LOR3 forecasts have been cancelled, but the Cumulative Price Threshholds (CPT) have been blitzed, and NSW now joins QLD. This is all new territory for the national market. Perversely, once the CPT is breached, and the “soviet” fixed price conditions are set, many generators withhold auction bids to supply, and then the AEMO has to order them to do so. It’s just a rolling crisis with one bandaid to fix the last cut piled onto the new wound… Paul McArdle tried to keep up with the Yo-Yo-ing of available generation in QLD once the CPT threshold was set on Sunday evening there. It appears the fixed price is $300/MWh, which is curiously, lower than the actual average daily price the market has arrived at every single day in June in both NSW and QLD. To give people some idea of the bloodbath on the Australian grid the average “monthly” price so far in June is $460 (NSW), $677 (QLD), $333 (SA), $284 (Tas) and $306 (Victoria). Thus the wholesale price of electricity for entire states for nearly two weeks is 46c in NSW and 68c in Queensland. And generators will be able to apply for compensation for losses, so there are more dollars to flow long after the crisis is over.

This graph shows how much the entire renewable revolution is helping at this moment in Australia. The graph also shows “Battery storage” so people can see how much it is contributing. To notice the microscopic sliver of red battery power flicker on and off, go to Anero.id and tick-untick the battery box.

Everyone will blame “the failure of coal” but anyone can see that more solar panels and wind turbines wouldn’t solve anything tonight. 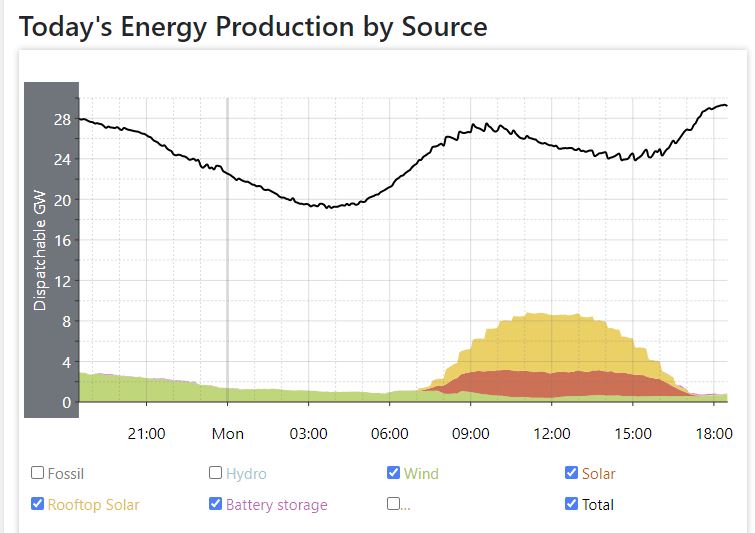 There is almost no solar, wind power or battery power available.  |  Anero.id

Coal power is obviously the mainstay of the grid

Those sources from the bottom are black coal, brown coal and natural gas. The light blue is hydro power. Everything else is trivia.

At one point today the total power from our entire wind generation across five states was 409MW at 12 noon out of 8.5GW of “capacity”. 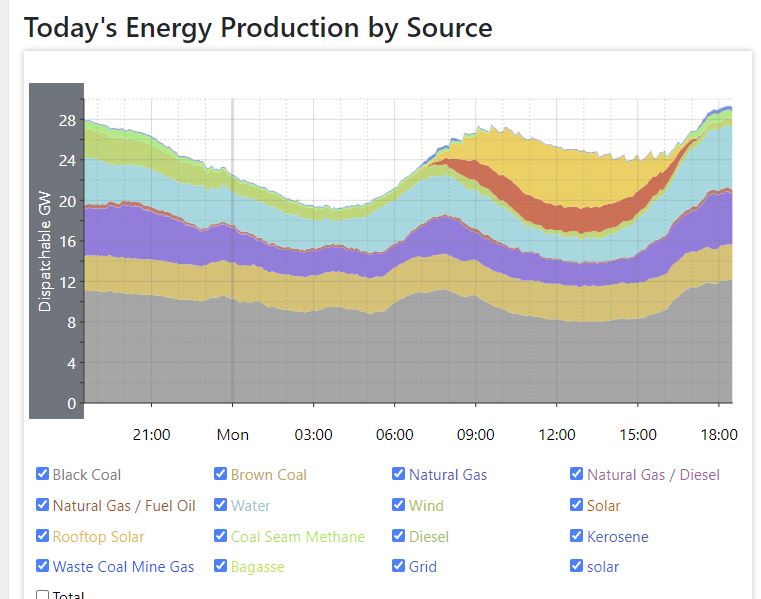 Qld at risk of blackouts amid price cap

The national energy market operator is having to direct electricity generators in Queensland to switch on plants to avoid blackouts, after the introduction of controlled prices in the state left some generators unprofitable. Despite the orders, Queensland is at risk of potential blackouts later on Monday because of a deficit in supply, the Australian Energy Market Operator signalled, by forecasting a level-three “lack of reserve” notice.

“The wheels seem to have fallen off the energy market,” said power market watcher Paul McArdle at specialist information service Global-ROAM. He noted AEMO has forecast that 1454 megawatts of demand could be “interrupted” at 5.30pm, a load “about the size of Brisbane”.

An extended period of extreme electricity prices triggered a rarely-used cap on wholesale power prices in Queensland on Sunday evening, of $300 a megawatt-hour.

Price caps and emergency rules are in action. Generators are being called up to perform whether they like it or not. But some are short of fuel, and any group ordered to supply can ask for compensation payments. In Queensland a cumulative total of seven days in a row topped $1.36 million so the “price cap” was triggered for the first time.

The renewable wonderland of South Australia is tonight running on fossil fuels:

Specifically, South Australia is currently using natural gas, diesel, and fuel oil to keep the lights on. The price is $272/MWh, with about 2GW being used at 7.40pm local time near the end of the highest peak for the day. Prices are also forecast to be at risk of tripping the cap of $15,000 in the next hour, but they may not. Tasmania is almost all hydropower at the moment but prices are $440/ MWh.

The same interconnectors that allow electricity to flow also allow blistering high prices to flow throughout the system. Apparently, both SA and VIC are at some risk of hitting their cumulative price caps too. Fortunately for WA and the NT they are not connected to the NEM and the high renewable-induced bloodbath prices in the market can’t flow through. 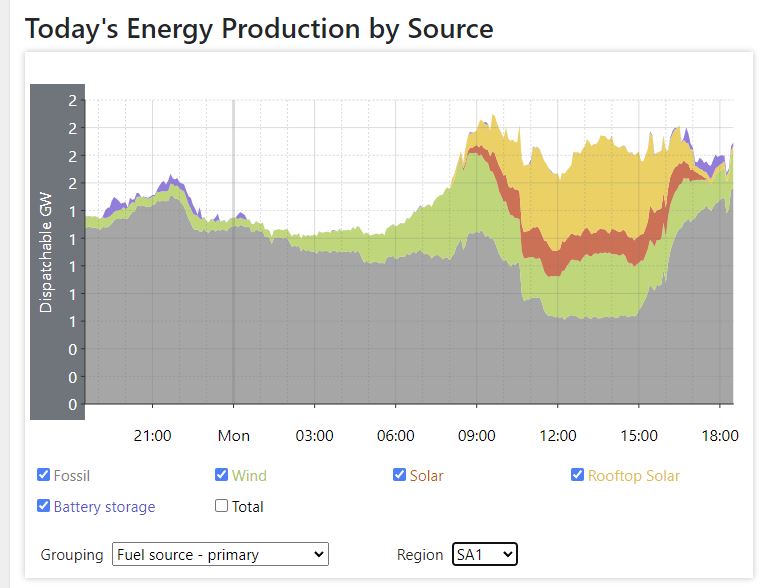