Once, when the West could build things, problems got solved

Back in 2007 at least a few people still remembered that golden era. Here’s Dr Ziggy Switkowski, who at the time was head of the Prime Minister’s nuclear task force:

The French in 15 years went from zero reactors to 59 reactors and 80% of their electricity is nuclear.  — ABC

Now we don’t even dream of success. If we had started in 2007, Australia could have had ten plants finished already.

The first nuclear plant in France was built by the EDF in 1962. Then the 1972 oil crisis put a rocket under the industry. So Prime Minister Pierre Messmer came up with a plan to build an unbelievable 170 nuclear plants by 2000. 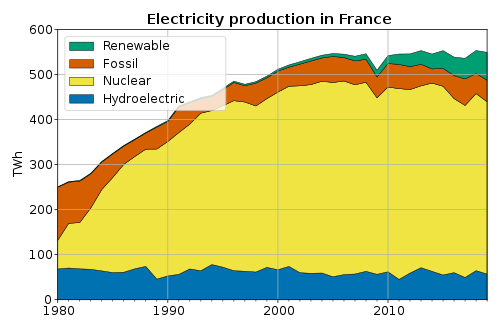 By the mid 1980s it was clear that would not happen, but not for the reasons you might think. The problem was not that they weren’t building plants fast enough, but that they were building them too fast.  Demand wasn’t rising fast enough to keep up. The plants are most efficient running at 80-90% but by 1988 there were so many plants the capacity factor of France’s nuclear power stations was only running at 60%. There was too much generation to run them efficiently.

From Wikipedia, there are lessons here on how different the situation was: Three plants were started the same year

The problem of how to solve highly technical decisions is not like this either:

The announcement of the Messmer Plan was enacted without public or parliamentary debate.[16][17] Concern over the government’s action spread among the scientific community of France. The lack of consultation outside of political realms regarding the plan led to the formation of the Groupement des scientifiques pour l’information sur l’énergie nucléaire (Association of Scientists for Information on Nuclear Energy). 4,000 scientists signed a petition as a response, known as the Appeal of the 400 after the 400 scientists who initially signed it. [16]

The reason that the Messmer Plan was enacted without public or parliamentary debate, was because that there was no tradition to do that with highly-technological and strategically-important decisions in the governments of France and the parliament did not have a scientific commission with sufficient technical means to handle such scientific and strategic decisions, just like the public does not have such means. France does not have any procedure of public inquiries to allow the assessment of major technological programmes.[18] The plan envisaged the construction of around 80 nuclear plants by 1985 and a total of 170 plants by 2000.[16] Work on the first three plants, at Tricastin, Gravelines, and Dampierre started the same year[7] and France installed 56 reactors over the next 15 years.[19]

However by the mid 1980s it became clear that the Messmer plan had been overambitious. Nuclear power plants achieve their optimum economic value when run flat out, and the projected demand had not materialized. By 1988 France’s nuclear power plants had a capacity factor of only around 60%, whereas other countries that had not invested in nuclear power so heavily were nearer 80-90%.[7]

France’s population is about 3 times Australia’s. So perhaps we could only build, say, 18 reactors by 2040 –Where was that election plan?

At the moment, by 2040 we’ll be lucky to get one nuclear sub to plug into the grid.