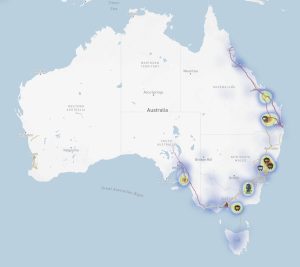 With 65 Glorious Gigawatts the Australian grid system has a vast excess (theoretically) of generation capacity, yet it’s so fragile that the loss of an interconnector, normal maintenance and a few coal turbines down — has triggered $100 million dollar price spikes. These burning pyres of money are so savage the average cost of wholesale electricity — across a whole day — is lately in the realm of $200- $700 per megawatt hour over most states for 24 hour periods. For the last week, daily prices have been ten times the “old normal”.

And it comes on the back of the most expensive April in the Australian grid history in every mainland state on the National Electricity Market.

Autumn and spring are supposed to be easy days in Australia with peak demand only running at 27,000 MW.  Because things are lighter, generators do normal maintenance at this time of year, but at the moment, there doesn’t seem to be any room for that in the network. In summer, demand is often 5,000MW higher. Where’s that going to come from?

Business in RenewableWorld means being ready to drop everything and switch off the lights, but it might stop storms a hundred years from now, so it’ll be worth it…

Sell & Parker, a scrap metal buyer in Banksmeadow that supplies to BlueScope Steel, said it had to curtail production over the last three days due to huge price volatility for its electricity supplies.

“Prices are jumping up 45-fold in a matter of minutes and we are being forced to shut down production,” Sell & Parker director Morgan Parker said. “It just kills you to run at those sort of prices.”

The company shuts off its metal shredder, one of only three in the state, during high price events and said it was being handicapped in comparison to international competitors operating in the same business.

Big grid users can hedge against that volatility, but hedges have their own costs (which must surely be rising) and smaller victims with wholesale spot contracts must be sweating on every five minute contract in the late afternoon.

On Sunday the AEMO (Australian Energy Market Operator) was already forecasting a drop in wind power on Thursday so severe that will leave South Australia at risk of  rolling blackouts.  The AEMO forecast a rare LOR3 (Lack of Reserve Class 3) though hours later resolved it. It seems the Heywood interconnector that South Australia relies on to get coal fired power from “next door” in Victoria will be limited on Thursday. The combination of low wind and little back up from interstate coal puts the South Australian RenewableWorld at risk of running out of power.