It’s the usual apocalyptic headline, hyped from a press release smoked out of a Nature paper, which was pumped from a climate model:

An Israeli study published on Thursday found that climate change is already causing a “considerable intensification” of winter storms in the Southern Hemisphere to a level not anticipated until 2080.

It’s bleak I tell you:

In the new study, Chemke and his team compared climate model simulations with current storm observations. Their discovery was bleak: It became clear that storm intensification over recent decades has already reached levels projected to occur in the year 2080.

Yet again we see true mastery of confirmation bias at work: When the climate models underestimate things it means doom is coming faster. When they overestimate things, it means the equipment is faulty.  What would 28 million radiosondes know?

There must be 1,000 permutations of climatoid factors that could be measured across regions of the Earth, but Lo — there has been an intensification of Winter Mid-Latitude Storms in the Southern Hemisphere! Not summer storms, spring storms, or Atlantic Storms or Atlantic Tropical Autumn storms, or Pacific Eastern high latitude Westward events (as far as we know) but roll the dice, some of them will turn up snake-eyes too! (Where is my grant?)

As far as I can see, this is a good example of Neolithic tea-reading type science — equivalent to studying the trails of the scribbly-bark beetle and forecasting that the Blinking Star will eat Neptune before the next full moon.

These are short term trends within the noise envelope, but good enough for a Nature paper, and a press release:

What if there was, say, a natural 60 year trend in there? Who would know? 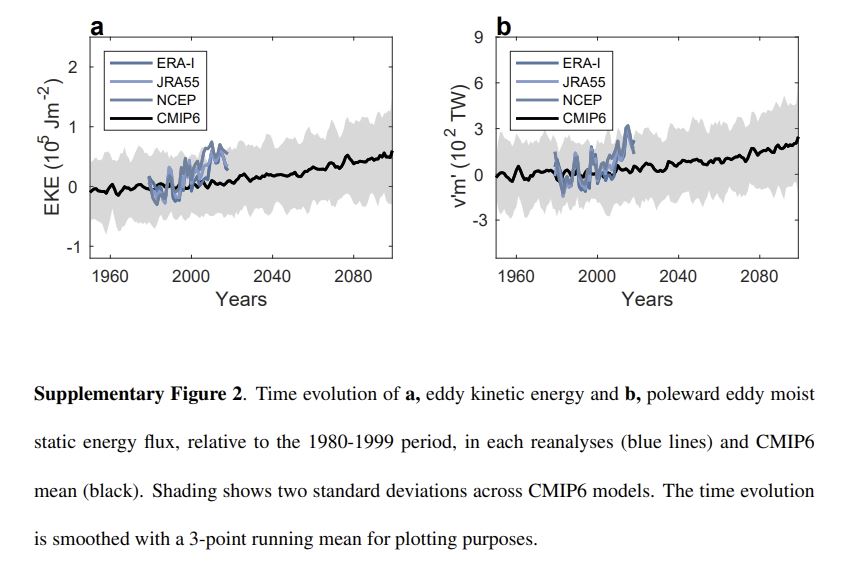 I notice in the Supplementary section the captivating graph below. Part A, apparently, is the observed trend, and Part B the modeled trend, which don’t look too similar to me. The caption has the immortal words:“The small black dots indicate regions where two thirds of the models/reanalyses agree on the sign.” On The Sign! Unless I’m reading that wrongly, they’re excited about the dot points where two out of three models guessed whether the trend was up or down. It’s that bad. In most of the Pacific apparently nearly 70% of models looked at “climate change” and couldn’t even guess the direction right.

Indeed, the models are so wrong in the Pacific, perhaps it’s significant? 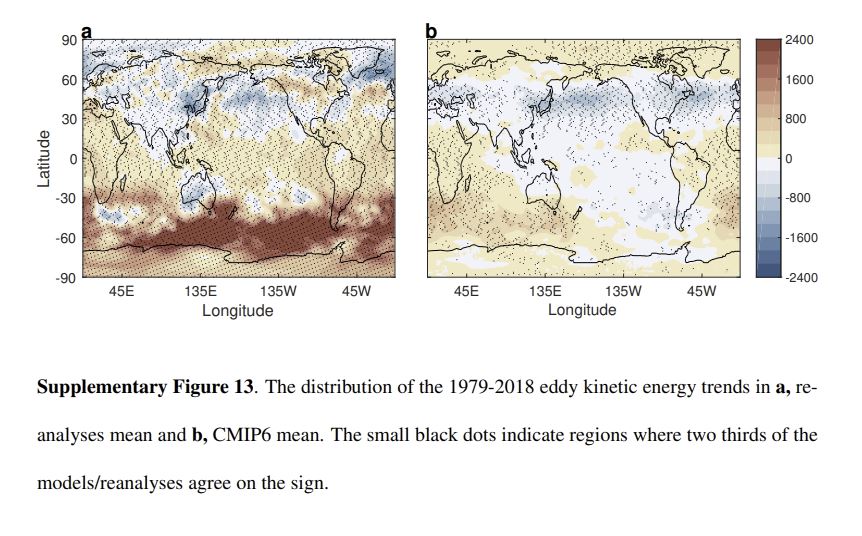 About 30 massive, intricate computer networks serve the scientists who stand at the forefront of climate change research. Each network runs a software program comprised of millions of lines of code. These programs are computational models that combine the myriads of physical, chemical and biological phenomena that together form the climate of our planet.

What is Truth but “millions of lines of code” eh? What could possibly go wrong (apart from things like the G.F.C.)?

In the new study, Chemke and his team compared climate model simulations with current storm observations. Their discovery was bleak: It became clear that storm intensification over recent decades has already reached levels projected to occur in the year 2080.

Spot the bias anyone? We studied this part of the world  because it showed what we wanted to find?

If any taxpayer funds were harmed in this report, we want them all back. This is non-stop agitprop:

Chemke, Ming and Yuval’s study has two immediate, considerable implications. First, it shows that not only climate projections for the coming decades are graver than previous assessments, but it also suggests that human activity might have a greater impact on the Southern Hemisphere than previously estimated. This means that rapid and decisive intervention is required in order to halt the climate damage in this region. Second, a correction of the bias in climate models is in order, so that these can provide a more accurate climate projection in the future.

Could the climate models be inaccurately predicting other important phenomena? “The models are doing a very good job at forecasting nearly all the parameters,” Chemke says. “We’ve discovered one parameter for which the sensitivity of the models needs to be adjusted. Changes in temperature, precipitation, sea ice, and summer storm patterns, for example, are all being simulated accurately.”

For what it’s worth, Rei Chemke only finished his BSc in 2012, and his PhD is all “climate science”. It’s more a case of Kool Aid over-exposure for a young guy that has probably never met a skeptic.

Everyone who has met a skeptic knows climate models can’t predict the climate on a local, regional, or continental scale, they don’t know  why global warming slowed for years, they get the core assumptions wrong – the hot spot is still missing, (that’s the only fingerprint they said mattered, right up until they couldn’t find it). They can’t explain the pause, the cause or the long term historic climate movements either. Measurements of satellites, cloud cover changes, 3,000 ocean buoys, 6,000 boreholes, a thousand tide gauges, and 28 million weather balloons looking at temperature or humidity can’t find the warming that the models predict. In the oceans, the warming isn’t statistically significant, sea-levels started rising too early, aren’t rising fast enough, aren’t accelerating, nor are warming anywhere near as much as they predicted. Antarctica was supposed to be warming faster than almost anywhere but they were totally wrong. The vast Southern Ocean is cooling not warming. The only part of Antarctica that’s warming sits on top of a volcano chain they prefer not to tell you about.

Some scientists are also behaving very badly: hiding data, declines, history, adjustments and methods.  But thousands of other scientists are protesting all over the internet.