There are people tracking all the reports of athletes suddenly collapsing and dying in their prime, or heartbreakingly, even in their teens. This isn’t a definitive study, but where are the answers and why don’t we know them? There are a hundred million reasons to supply data that shows vaccines are “safe and effective”. If our health really did matter, and the incidence of sudden deaths in athletes was the same as every other year, where are those studies? Why aren’t we discussing this on the news?

Some of the collapses and deaths listed here may have nothing to do with vaccines, the anonymous researchers admit and declare that. They want the full data, we all want the data. But it’s nowhere to be found.  The medico’s and football clubs, and the Department of Health have gone from bragging about getting their boosters on Twitter to saying nothing. They are not so keen anymore to report or declare vaccination status.

The rise in mid 2021 start at the same time a massive experimental medical program starts. It might be coincidence, but if it’s normal, they would be saying so, with open statistics and data, not shutting down the conversation, and sacking football managers.

The mainstream media still are not reporting most, but sports news cannot ignore the fact that soccer players and other stars collapse in the middle of a game due to a sudden cardiac arrest. Many of those die – more than 50%. 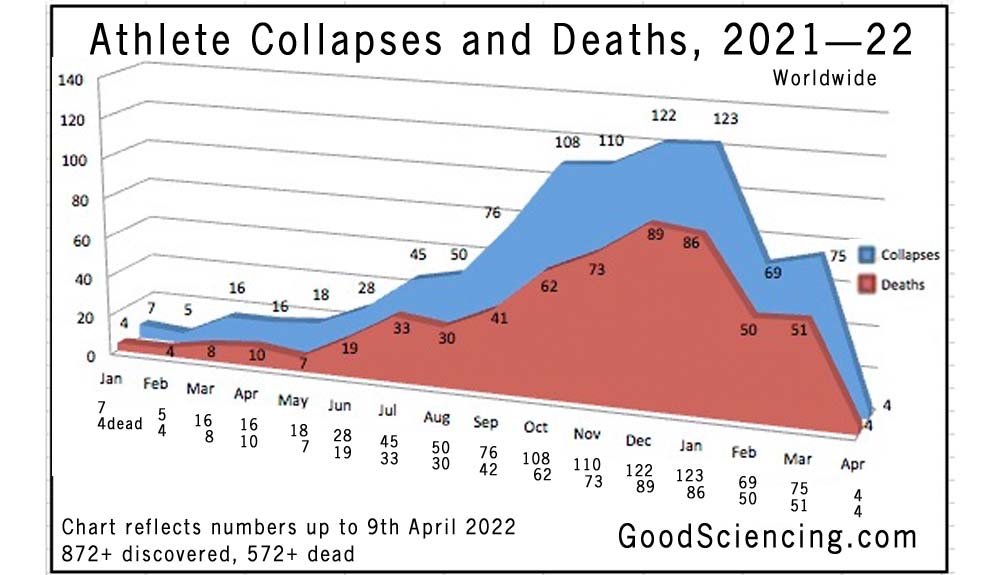 There has been a rise in reports of athlete sudden collapses and deaths since July last year.  | Goodsciencing.com

A  review of sudden cardiac deaths in sport found about 29 a year mentioned in medical literature.  A different study of the US found about 70 annual deaths across 38 different sports. There are more deaths listed in the peak months in that graph above than usually occurred in an entire year.

The International Olympic Committee in Lausanne, Switzerland, studied documents from international data banks from 1966 to 2004. Those documents indicate 1,101 sudden deaths in athletes under 35 years of age, an average of 29 athletes per year, the sports with the highest incidence being soccer and basketball. (NIH Document)

A study by Maron on sudden death in US athletes, from 1980 to 2006 in thirty-eight sports identified 1,866 deaths of athletes with cardiac disease, with a prevalence of hypertrophic cardiomyopathy.

More people are writing to tell us that in many cases, we didn’t mention a person’s vaccination status. There is a good reason for that. None of the clubs want to reveal this information. None of their sponsors want to reveal it. The players have been told not to reveal it. Most of their relatives will not mention it. None of the media are asking this question. So what should we do? Stop this now? No, we will collect as much information as we can, while it is still available, because eventually, more information will come out, and we will be here to put it together. Will it mean anything? We don’t know. What we do know is that there is a concerted world-wide effort to make this information go away, so that fact alone tells us it must be collected, investigated and saved so other researchers can look at it to see if there are any useful patterns.

Here is a demonstration of how sports clubs do not want the injuries of deaths of their players to be associated with the COVID vaccines. It tells the story of why they will not report which of their players has been vaccinated and when. Sunderland FC manager Lee Johnson suggested that the COVID vaccines may have caused the heart issues for his goalkeeper, Lee Burge. The club then sacked the manager.

It’s the greatest dereliction of duty …