This supports Jo’s post on wind droughts. The point is that we have to strive for “wind drought literacy” in the general population. Apart from people who mess around in sailboats and people who play sports where the wind has an impact on missiles in flight, most of us take little notice of the wind unless it is blowing our hat off or turning our umbrella inside out.

It is really important for everyone to know that the wind is quite often low across the whole of SE Australia due to high pressure systems and sometimes these systems linger for a day or two. Wind droughts are more frequent in individual states.

The easiest way to get a fix on the wind situation is to glance at the NEMwatch widget. It is live and it changes every five minutes. You can read it on your phone and this is the kind of picture you will see. 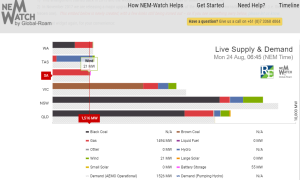 The bars indicate the amount of power that is being generated and consumed in each state at the moment. WA is not connected to the Eastern electricity grid so supply matches demand while in the SE there are flows between the states

The generation bar is colour coded with wind in GREEN and the takeaway message is to see how much more green is required to replace coal (black and brown) and gas (red). Windless nights are the real killers because both the sun and the wind are off duty.

The AEMO has a continuous record of the power delivered from all the wind farms attached to the integrated electric power grid covering South Eastern Australia (the NEM). Paul Miskelly used that data for the calendar year 2010 to report that the total wind output across the entire grid fell rapidly to zero or near zero on many occasions in the year.

 During the first 6 months of the year, there are 58 intervals where the output falls below 2% of the installed capacity.
 For the entire year, there are 109 such intervals of varying length, adding up to 155.6 hours, or nearly 6.5 days.

At the time where were only 23 wind farms with a less than 2GW of installed capacity and it was anticipated that the supply would become more reliable as the number of sites increased.

Some years later John Morgan reported that the situation was much the same in the 12-month period from Sep 2014 to Sept 2015 when the capacity of the wind fleet was approaching 4GW.

Mike O’Ceirin, an independent analyst, has unpublished information collated from the AEMO records up to the end of 2020 showing an average of 15 episodes per year when the delivery was 6% or less of the installed capacity.

Some of those episodes last for a long time. 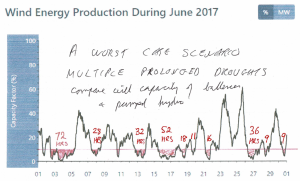 THE IMPLICATIONS OF WIND DROUGHTS

The system has to be designed to cater for the worst case scenarios of wind and solar input. Obviously the weakest parts are windless nights because WHEN THERE IS NEXT TO NO GENERATION, NO AMOUNT OF ADDITIONAL WIND AND SOLAR CAPACITY HELP. 5, 10 or 50 times next to nothing is still next to nothing compared with the demand in the grid.

RE enthusiasts regularly report new records for the penetration of RE into the grid and the South Australia is the star performer because on sunny and windy afternoons RE can exceed the demand in the grid for short periods. They are looking at the system through the wrong end of the telescope because generating an excess of RE power for some short periods, or even substantial periods, will not prevent system collapse on windless nights unless there is 100% of conventional power available or there is massive grid-scale storage that is not feasible with current technology.

So read the reports from the Energy Realists of Australia, become a wind-watcher and tell your friends and relations about the NEMwatch widget!