A week ago our newspapers were full of dire warnings that the Australian coal mining industry was going to be left in the lurch by declining orders from China. “The End of Australia’s coal export boom is Imminent” said the AFR — parroting a report by a group that includes Alex Turnbull, someone known to profit from renewables.

What none of the headlines mentioned was that China is set to hit a new all time record of coal use this year.

China already burns   82 times as much coal each year as Australia does. Soon that will be 88 times as much. But who’s counting?

China promotes coal in setback for efforts to cut emissions

Official plans call for boosting coal production capacity by 300 million tons this year, according to news reports. That is equal to 7% of last year’s output of 4.1 billion tons, which was an increase of 5.7% over 2020.

Chinese officials are blunt about why they need more coal:

Coal is important for “energy security,” Cabinet officials said at an April 20 meeting that approved plans to expand production capacity, according to Caixin, a business news magazine.

“This mentality of ensuring energy security has become dominant, trumping carbon neutrality,” said Li Shuo, a senior global policy adviser for Greenpeace. “We are moving into a relatively unfavorable time period for climate action in China.”

Clearly these new levels of 4.4 billion* tons are going to set a record high for coal production, with or without Australian imports: 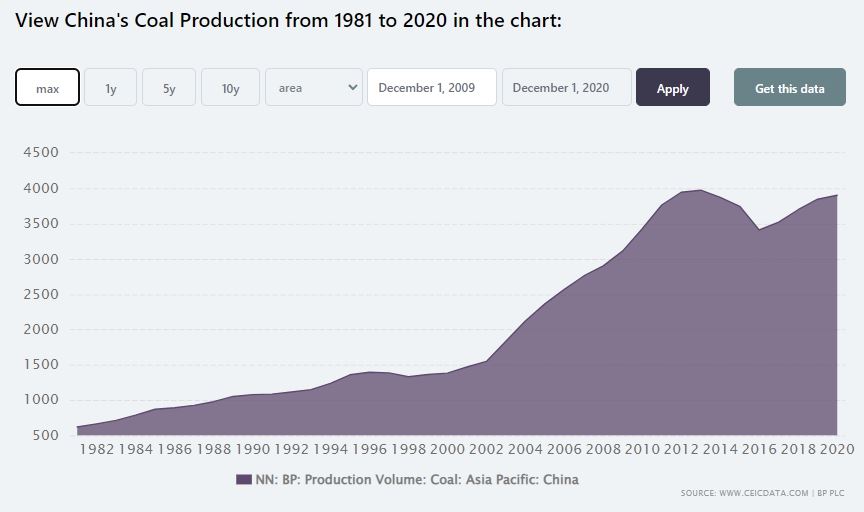 The ABC worked to mislead Australians during an election campaign, right in the headline. It’s if the Australian coal industry has no future and “needs to transition” at a time when the largest user of coal in the world is set to use even more coal.

A new report warns Australian thermal coal exports to China could fall by 20 per cent by 2025 as China invests in domestic mines and a major coking coal mine in Mongolia.

The report also predicts coking coal exports to China could fall by more than 20 per cent.

The modelling by ANU energy economists Jorrit Gosens and Frank Jotzo suggests that if China commits to its current climate policy, coking and thermal coal imports will drop by a quarter within three years, from 210 megatonnes (Mt) in 2019 to 155Mt by 2025.

Like all election advertising ABC fake news stories should be legally required to name the Green or Labor party official that approved them.

The real stories and the trends that matter to Australians lie unnoticed:

However, global coal trends will be shaped largely by China and India, who account for two-thirds of global coal consumption, despite their efforts to increase renewables and other low-carbon energy sources.

Australia exports about 400m tons of coal a year and only consumes about 50m tons itself. We’re the first or second largest exporter of coal in the world, but we’re only digging up about a tenth as much coal as China does.

We have a 300 year supply of coal, even at this rate of production, so there’s no reason to transition out of it.

_________________
* ERRATA: “Million” was obviously meant to be billion. Apologies for the typo. Likewise 32 times larger was really 82, and “twice as much coal” is really six times as much as used in Australia. Originally based on Australian coal consumption published in  a different unit. Who knew coal was measured in anything other than megatons.?