There is pandemonium on the markets and suddenly many nations want to be energy sufficient. It’s perhaps not The Great Reset than the collective-types were expecting?

The gas flows from Russia to the EU are sporadically tightening, and the Yamal-Europe line has been cut off. Gas in Europe is now trading at €340/MWh which is fully 22 times the long term average. Newcastle coal normally trades around $60 per ton, but now is over $400 USD.

A few days ago the former head of MI6 in the UK called for an immediate lifting of the frakking ban which was set to see concrete poured down the only two shale gas wells in England by March 15th. Thirty-five Tory MPs and four peers sent a letter to Boris demanding the same thing.  Now even Boris Johnson is suggesting the Green targets could be relaxed, not just for Britain, but for all the West.  He went so far as to suggest The West could give itself a “climate change pass” while we figure out how to get energy that isn’t Russian gas.

So much for the end of Fossil Fuels

“margin calls and illiquid trading conditions adding to the panic” 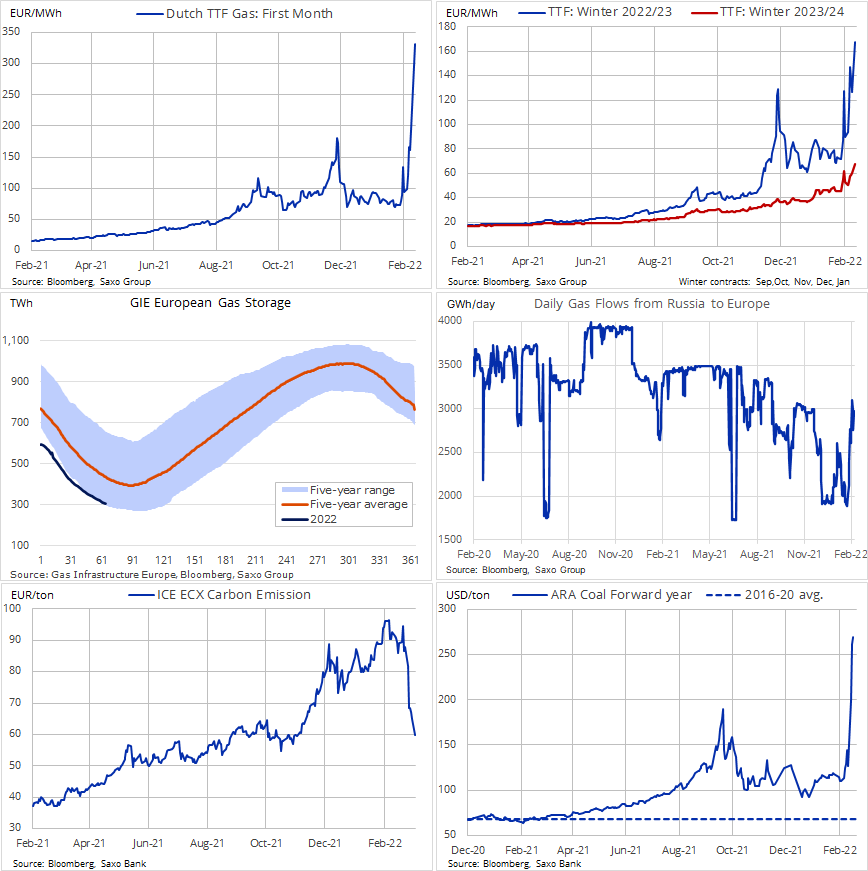 Brilliant: A referendum on Net Zero

Nigel Farage launched a campaign Britain Means Business seeking to force a referendum on the Government’s plan to achieve “net zero” carbon emissions in the UK by the middle of the century.

Who could argue with that, apart from all the people that know the voters don’t want Net Zero if they have to pay for it.

Green Blob has it’s own crisis — how to stay relevant

Imagine an army of community groups suddenly roaming the countryside to save Britain from Vladimir by explaining heat-pump grants and waving infra red detectors at their drafty doors?

It all seems a tad artificial. If the planet was at stake they could have done this all along. Why now?

UK should ‘mobilise army of volunteers’ to transform energy landscape

John Taylor, the energy projects manager at Energy Hub, argues that the UK should be convening local groups that can help give advice on grants for insulation and heat pumps, set up community-owned renewable projects, and help with insulation.

“Volunteers can be provided with thermal imaging cameras to go door to door,” he suggested. They can help “identify cold spots and installing simple measures like draft proofing and radiator panels. They can also help set heating controls and lower boiler flow temperatures.”

He also suggests that community groups can “run a village survey to find out who needs items like DIY loft insulation and draft proofing kits. Then order them wholesale to get bulk discounts and deliver them to a community centre or village hall for people to collect.”

Vladimir Putin might be the best thing that ever happened to Western Energy independence.

UPDATE: Latest news is that Russia says it will end the War on four conditions. Ukraine must stay neutral, recognize Crimea is Russian and that Donestsk and Luhansk are independent. In reply, Zelensky has already done an interview saying “No” but Putin needs to start a dialogue. Zelensky suggests that Putin is in a bubble and may not be getting realistic information.