If only the $3 million dollar a day ABC could afford a science team that could do as much research as one unpaid volunteer does in a day?

Thanks to Cliff Ollier and Ken Stewart for the BOM graph of past Brisbane Floods. Clearly things were worse in the 1800s.

If CO2 has any effect perhaps it reduces flooding? 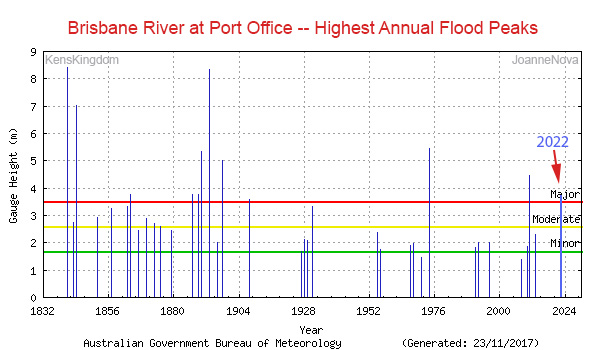 There have always been big floods in Brisbane       | BOM Source   |  KensKingdom

One day when the ABC finally gets the Internet they’ll be able to find official pages like “Known Floods in the Brisbane and Bremer River Basin“. And one day the half billion dollar BOM agency will be able to update graphs like this within a week of a new flood peak, like bloggers did (above).

As Ken reports the ABC made a fuss over three Queensland sites recording more than 1 metre of rain in just four days. But neither the ABC or the BOM is telling Australians that there have been at least nine similar “Rain Bombs” before and most of them were more than one hundred years ago.

I went looking at Climate Data Online for four day rainfall totals over one metre, to compare with the recent totals above at Mount Glorious, Pomona, and Bracken Ridge. For a start, Pomona’s BOM station has been closed for years, and Bracken Ridge is not listed at all, so those reports are from rain gauges external to the BOM network and can’t be checked.  That’s OK.  In about half an hour I found the following four day rainfall records.

1893 was a wet year!  Crohamhurst had 2023.8 in five days, and Brisbane had three floods in two weeks in February and another in June.

And there is no such thing as a “rain bomb”, a term invented to make it sound unprecedented.  This was an entirely natural and normal rain event.  Slow moving tropical lows drift south every few years in the wet season, producing a large proportion of Queensland’s average rainfall.

It’s another Redpill moment. Spread the news. Australians need to know the media and the BOM are not giving them the whole truth. Has anyone in the BOM called up the ABC and corrected their mistake? Isn’t that their job?