Tucker Carlson points out how Trudeau’s overreaction reveals his impotence.

By going double or nothing, it’s so much harder for Justin Trudeau and Doug Ford (Premier of Ontario) to back down.

The biggest human rights protest in the West in a generation:

The Left used to represent the Workers

The great political realignment continues. The ruling class have coalesced — with the establishment right joining the bureaucratic left. They are all college-educated  (but not too bright, you understand), and they love well paid government jobs and government money, and being aligned to the dominant political ideology so they can name-call anyone else and dismiss them without having to actually engage with what they are saying — without having to actually think.

But they left behind most of society. We can’t all be overpaid non-productive consumers of government money.

Parasites United will never be asked to work too hard.

Here’s one Ontario Police Officer who says there are “many police officers who want nothing more to see our country returned back to the beautiful state that it was. A lot want to speak out but we can’t because we will be reprimanded…”

The crowd in Ottawa is said to be growing and massive this weekend. 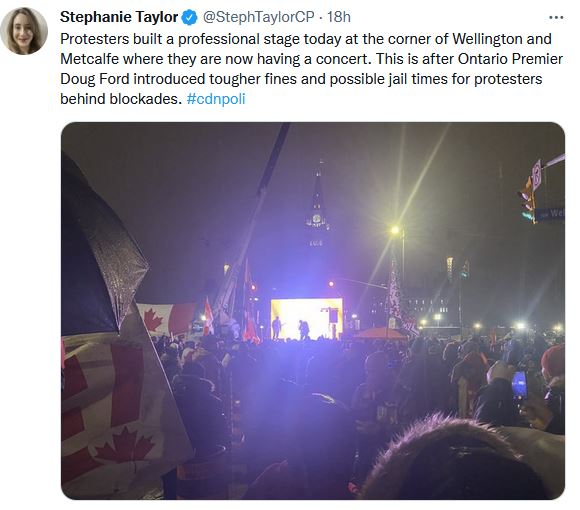 Heavily Armed Officers Have Arrived at the Ambassador Bridge

Unlike the Ottawa protests, which have been impeccably well behaved, the Ambassador Bridge Protest is a higher risk, and lower moral-high-ground protest — potentially causing financial losses to others. The easy moral solution of course, is for Trudeau to end the mandates.

On Friday a Canadian Judge granted an injunction to end the Ambassador Bridge Blockade.  Premier Doug Ford, who was heard telling supporters he would end the mandates yesterday, has instead today announced to end the blockades there will be fines for “non compliance” of up to $100,000 and maybe a year in prison. This is the same Premier Ford who said his government is making these temporary emergency powers permanent in law. To help police “do what it takes to restore law and order,” adding that “we must heal the divide that is fracturing society.” That’s $100,000 dollars worth of healing for all you non-compliers.

The document, which was provided late Friday by the City of Windsor, states that anyone having notice of the order is prohibited from “impeding or blocking access to the Ambassador Bridge and indirect or direct approaching roadways and access points” for 10 days.

The injunction authorizes police or “designated agents” to remove any vehicles, personal property, equipment, structures, or other objects that impede or block access to the bridge, and approaching roadways. — CBC News

Reuters reports that the protesters were defiant. There was a very spirited vote to keep protesting. The stakes are very high. The Riot and SWAT teams have been sent in to remove the trucks.

Rebel News reporters Isabelle Rivo and David Menzies are on the scene of an intense policed stand-off between protesters blocking Windsor, Ontario’s Ambassador Bridge and dozens of heavily armed officers.

UPDATED: There are unconfirmable reports that the protesters in cars at Ambassador Bridge are leaving as police ask, one by one, due to a “huge police presence” and the threat of fines. Some are being towed away. It’s far from clear what is really happening.

At Coutts River, on the Alberta border, the protestors have formed human chains to stop police breaking up the convoy:

Your money is Their Money: donations stolen

The Toronto-Dominion Bank (TD) Bank in Ottawa has said it will give $1.4 million of the donations made for the Truckers “to the courts“. These are funds from both GoFundMe and direct donations to Truckers. And you thought your money was yours to give to whomever you wanted?

UPDATE: MM Comments at #2 that in theory this is so donors can get their money back, which is good to hear. But even if this is the case, the delay in getting funds to Truckers and the doubt created by this move will deter donors from donating and Truckers from joining the battle. It serves the Empire, and will sabotage donations and also drain them to fight legal battles.

This may not work out too well for the bank if Canadians that have funds in TD Bank decide they’d like to find another bank.

Protesters plan to fight back legally to regain the funds. They are also talking about using cryptocurrency for donations but it’s not entirely clear that they will be able to convert the crypto into cash in Canada.

When the government steals the money for legal protests it feels like we’re at a moment in history where people need to carry gold across the border to “fund the resistance”.

It could bring down Justin Trudeau

The big loser in this is Trudeau —  53% think Trudeau looks weak. Only 16% would “vote for Trudeau” based on the way he has handled the Freedom Convoy.

‘This could cost him his job’: A blockaded Canada turning on Trudeau, poll finds

‘The last time I’ve seen numbers close to this were in the final days of Brian Mulroney,’ says Maru pollster.

But make no mistake, Canada is a mess of contradictions. The same article reports that 56% of Canadians have no sympathy with the protest (despite largely agreeing with the aims of it). No  doubt the relentless media misinformation on the Truckers helps feed that paradox, though the protests on the bridges will be affecting jobs and supply lines. Astonishingly two-thirds of Canadians, according to one poll (how was that question asked?) said they would support military removal. Have they really thought about it?

We’re in an information war. If Canadians knew how careful, considerate and law abiding the protestors have been (for the most part) they might view things differently.

Ultimately, the mandates are hurting, and Trudeau faces a Parliamentary challenge:

Canada’s 3.7 million unvaccinated remain banned from air travel, rail travel and government employment, with no hint from Ottawa on when those strictures might end.

Blockades aside, Trudeau is now facing a joint House of Commons motion from the Conservative Party and the Bloc Québécois calling for an end to COVID-19 restrictions by the end of this month.

h/t David and Bill in AZ and Mantaray Yunupingu, David Maddison, Another Ian.

Australia has finally had enough!

Years ago I rode across that bridge every day.  Great to see a magnificent turn out today.

In France, reports of tear gas and extraordinary footage:

Watch as thousands march the streets of Paris in protest of COVID mandates. The French have had enough. Take a look:pic.twitter.com/BPYypMMejb