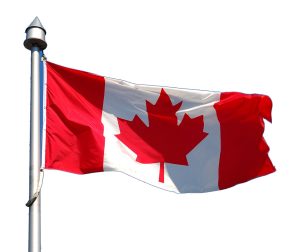 Something wonderful is happening. The Truckers are winning. The Ottawa Police are admitting they can’t solve this. All the dirty tricks that can be played haven’t worked. Sometime in the last week, former policemen, security experts, and military intel have joined the leadership team, and strategically, they are playing a faultless game. Trucks with wheels removed appear to be ideally placed to stop a police response. Overnight the media spin has flipped from calling the rally “disorganised rabble with violent extremists” to describing the protest as being run with “military precision”.  Watching the transformation on the CBC it’s almost like they’ve realized they were backing the wrong horse. The videos far below from CBC reporters are very unexpected — they’re good.

The Truckers are resolutely happy, cheerful, dancing, and determined. They are patriotic and family oriented, and that’s blowing away the “Extremist Terrorist” playbook, making Trudeau and the media look like fools.

Now that the Ambassador Bridge is effectively closed, supply chain trouble is piling up very fast.
…
Ford Motor Co. was forced to idle its Windsor engine factory and operate an assembly plant at reduced capacity. The Emerson MB/Pembina ND has also been shut down until all mandates end. This may bring things to a head quickly.
…

Ezra Levant, from Rebel News says “I think I know how this trucker rebellion is going to end.

In short: “Trudeau played the “Nazi extremist card” — so he can’t back down. But he’s falling in the polls, losing MP’s, and the Truckers are not backing down. Worse the protests are spreading, threatening to  spark off a US disaster for Joe Biden that would alienate the working class in a midterm election year, and exacerbate a supply chain crisis nightmare. So its Joe Biden that may announce that “the science has changed” and now we don’t need a vaccine mandate on the border. “Joe Biden saves The Workers!” If that happens, it won’t make any sense for Trudeau to keep a mandate on the other half of the same border, so he will follow. “He’ll say it was for Canada-U.S. relations, and that it wasn’t because of those racist, sexist, Nazi truckers.”

History books will be written about this protest — and other ones now gathering support in New Zealand, Australia and Europe.

Sixty or seventy other truckers have moved to the Ottawa Airport, and are slow rolling and honking as they circle the arrivals and departure lanes.

The Truckers are winning with peace, love and families

The Truckers are winning by staying resolutely absolutely polite and disciplined while they have a rollicking good time, with mischievous tricks to stay “ahead of the police”. By being family oriented, dedicatedly patriotic and steadfastly peaceful, they are showing Canada how fake the news is, and how out of touch Justin Trudeau is. They are gaining the support of more people as the news spreads  and the protests grow. 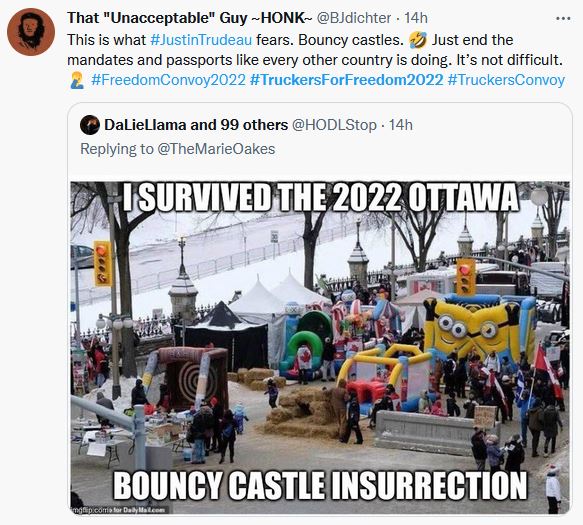 This is a family protest.

When they were banned from honking, they obey the ruling, and rev their massive engines instead. The singing, cheering and whooping sound like a party or festival.
…

…
And there are more red jerry cans than ever, most carrying water or nothing at all, so that the police cannot possibly stop the fuel getting through. Ottawa police were even seen confiscating wood as well. They stole the wood from indigenous groups doing some sacred fire. Where are the Woke protests? 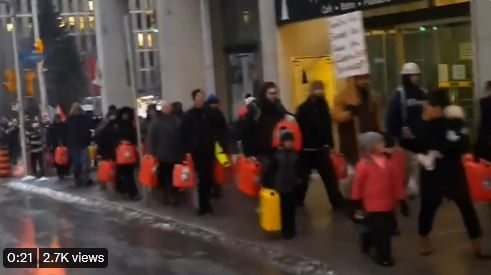 Everyone joined in the red jerry can decoy game, thwarting the police from confiscating the fuel the truckers need to stay warm. Twitter

At one point, the Canadian government used taxpayer money to book out every hotel room near the protest to make it impossible for the Truckers to get accommodation.  @Shimjelly has videoed a hotel basement completely empty of cars in a supposedly booked out hotel. It’s just sheer malicious waste to use the Truckers taxes against them. But it didn’t work. The Truckers found other accommodation or slept in their trucks.

Remember: The Canadian government is buying hotel rooms with tax dollars so tax paying citizens can’t stay in the hotels to continue their protest against the government.#TruckersForFreedom2022 #TruckersConvoy https://t.co/lJFsNxU825

And as the days tick over the protesters are becoming even more disciplined and organised. They appear to have help from former police and military workers who are advising them. The leadership team now includes the former RCMP officer who was on the PM’s security detail (Daniel Bulford quit last year due to the vaccine mandate).  Bulford is urging the protesters to connect with the police. Many of the police will have sympathies, and it’s so much better to build on that than oppose them.

Another key adviser is Tom Quiggan — a military intelligence officer, who is a counter-terrorism expert. The Freedom Convoy have set up a supply site 6km away, they built the instant shack kitchen, they have even brought in three saunas to help keep protesters warm. About 400 trucks are holding firm near Parliament Hill, and about 100 of those have families with children sleeping in them. The optics of any forced removal will look appalling.

Chief Peter Sloly, Ottawa Police Service admits there is not much he can do:

“There is likely no policing solution to this”.

“I would say the opposition at this point doesn’t actually have a strategy. They have a sort of weak goal, in that they want the streets cleared, but they have no real idea of how they want to get there.”

One policeman involved spoke out against the police doing politicians dirty work. He said something had happened which had changed him, being asked to remove Canadian protestors gas tanks. He knew this was wrong, and it conflicted with the whole reason he joined the force. His job was to protect the people, not take things from them.

Nick (Motichka? Apologies for the spelling) of the Calgary Police Force

Trudeau has lost the moral highground

He has tried to tar and smear the Truckers, call them racist, and it’s failed. There is no easy way out — he’s painted himself in a corner. It’s a game of double or nothing and it looks more ridiculous by the day.  As long as the Truckers stay defiantly Canadian, and completely well behaved, they will win. Trudeau could have stopped this all so easily — all he has to do is take away the vaccine mandates — instead there are no paths to victory left for him that don’t involve a major back-down or tyrannical force. He loses either way.

The police have seized 3,700 litres of fuel and yet the fuel for Truckers keeps coming.

Trudeau can’t order the police, the tow trucks, or the military to take the trucks away. The police are apparently taking long service leave and holidays, and the tow truck drivers “all have Covid”.

The Truckers have the endorsement and advice of retired police and Canadian Forces.

The shunned CBC are now painting the protestors as “military”:

Despite a strategic strike by police to cut off supplies to truckers encamped in the city’s downtown core, protesters appear to still have the upper hand on police.

It’s a success that experts partly attribute to the deep knowledge of law enforcement and military tactics that exist in the convoy’s organizational structure.

The group Police on Guard, formed during the pandemic, has endorsed the truck convoy. On its website, it publicly identifies more than 150 mostly retired police officers who are against government-imposed public health measures, such as vaccine mandates. More than 50 former Canadian Forces soldiers are also named on its site.

The organization says it has “boots on the ground” in Ottawa and has linked to YouTube videos of its members participating in the protest.

The Truckers refuse to do any interviews with the hostile press (like the CBC). This is excellent — it denies the CBC the footage to use against them in heavily misleading edits. It denies the CBC any relevance at all.

Michael Kempa, an associate professor of criminology at the University of Ottawa, says the convoy’s policing and military expertise can be seen in the co-ordination of their activities in downtown Ottawa.

“They have this sort of military or police or at least survivalist training. Look at the sophistication of what they’re setting up in terms of an encampment in downtown Ottawa,” said Kempa, who studies policing across Canada.

In the core, abandoned cars and trucks with their tires removed are blocking streets. To Kempa, the placement of these vehicles is not random but rather strategic in that they may prevent police infiltration.

This CBC News segment below is fascinating — having been made irrelevant, I wonder if this like a wake up moment for one CBC reporter, who has listened for hours to protesters talking on “Zello” — an App on phones that works like a CB radio.

The issue at the heart of it is just “freedom to choose”.

She does a very respectable job of describing what’s going on — I’m shocked. And perhaps she’s one of the good people left on the CBC, just as there are a few still at the ABC and BBC. Or maybe, having listened for hours a few at the national broadcaster realize they have to change their approach or they risk being left behind entirely by the winning side.

This new workers revolution are aware, perhaps thanks to the fallout from the Jan 6 protest in Washington, that the legacy media are the enemy, and that agents of government bureaucracies might be wandering among them, trying to incite bad behaviour. These protesters are so much more aware of the old traps, so much more politically sophisticated.

A desperate government and a despised media

In desperation there are thinly veiled hints that the government is concerned about the children in the Truckers Protest. About 100 trucks have children with them. This is overreach on a mass scale which will ignite a fire of indignant determination. Furious truckers started counter-interviewing some hapless CBC journalist who turned up — the truckers were demanding he tell them whether their children are in danger “Yes or No”!

The media have become so disparaged — all the large organisation are banned from interviews with Protest leaders, and even the man-in-the-street now knows the media are the problem. CTV gushed over the BLM and Antifa destroying statues, but now CTV Edmonton have peeled off their car branding stickers “for safety”. One journalist at the TorontoStar  claims  rather hysterically that the flag has been “critically injured”:

Canada’s flag has been weaponized and transformed into a hyperpartisan prop — here, and, it now seems, abroad. It’s not clear where we go from here.”

He then goes on to admit — without any irony — that he didn’t like the flag anyway:

I am not a flag-waver; never have been. I don’t own one, I don’t wear flag lapel pins. And like generations of Canadian backpackers, I only donned a Canadian flag patch while travelling many years ago in Europe to avoid being mistaken as an American.

Which says it all. The Canada-hating journalist class is completely flummoxed by the Canada-loving Truckers.

A few days ago CBC news was painting them as angry people, who were disorganized, and  being used by other groups with an agenda. See the video at “Protests in Ottawa crossed line from ‘expression of ideas’ to ‘extortion,’ criminologist says“. This was an interview with the same criminologist who now says they are organized like a military operation. How times change in just a few days?

The Truckers are winning, and the partisans are adjusting their narrative.

These Canadian truckers — and everyone cheering them on, despite the rage of the establishment — are saving Canada. They’re already making us more free. They’ve done more damage to Trudeau than the last two Conservative Party leaders combined. They’re a political tsunami.