All Trudeau has to do is declare vaccination is voluntary…

The Trucks can’t be towed away — apparently all the towing companies “have Covid”. And the Truckers have been resolutely peaceful and considerate (honking aside). The protests are spreading, not shrinking. The Ambassador Bridge is now also blockaded — that’s the major bridge connecting Detroit, Michigan and Windsor. Hundreds of Truckers on the Alberta border are still gathered there.  The Cavalry has arrived! Hordes of cowboys on horses have joined them. In Alaska, trucks are gathering too. Truckers in Alaska can’t drive to the rest of the USA without crossing the Canadian border.

The Ottawa Mayor has declared a “State of Emergency” because people were burning down buildings, destroying statues, and looting Nike stores — wait… No. That’s all fine. It’s a state of emergency because someone is honking horns. Trudeau could have come out to meet the workers revolution, listen to them, and negotiate, as any good leader would. Instead, the troopers started to arrest people carrying cans of fuel or propane gas to support the Truckers. Staying warm in parked trucks is now an act of insurrection.

It was minus 5C last night in Ottawa, and it’s forecast to be minus 20 this weekend.

With everyone carrying red jerry cans, it’s hard for the police to find the few with fuel. 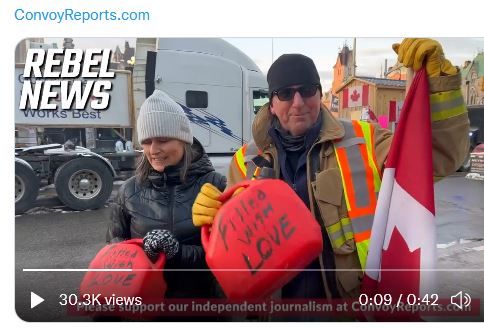 These Jerry Cans are “Filled with love”. Rebel News.

In three and a half days since GoFundMe tried to steal the donations, donors have already re-given almost 80% of the funds. The Freedom Convoy donations at GiveSendGo are now up to $6.2 million USD.

So much for it being “fringe”: One third of Canadians feel they have a lot in common with the Truckers protest. Obviously the protest includes a lot of vaccinated people as well.

The new conservative opposition leader in Canada (as of last week) is Candice Bergen, and she is now calling for an end to Federal vaccine mandates.

Ezra Levant: Trudeau is scared, and he doesn’t know how to stop this:

The DailyMail, quotes one Brian Gregg, a trucker from the US who is at the protest in Ottawa, saying:

…he’s amazed at the amount of support the truckers have received from the public.

‘We have access to whatever we need. I haven’t spent a dime since I’ve been here.’

The Freedom Convoy is well organized, according to Gregg. ‘Every street with truck drivers parked on it has a block leader, about 20-30 drivers per block leader. The block leader is the person you go to if you need anything –  food, gas, clothing, shelter, etc.’

Gas is a hot commodity to these diesel drivers who haven’t moved their trucks in over a week, while still idling their engines to keep warm. Gregg said men come by with wheelbarrows or wagons hauling 5-gallon jerry cans of diesel fuel to keep their trucks running.

Apparently US truckers are coming to help with spare diesel: 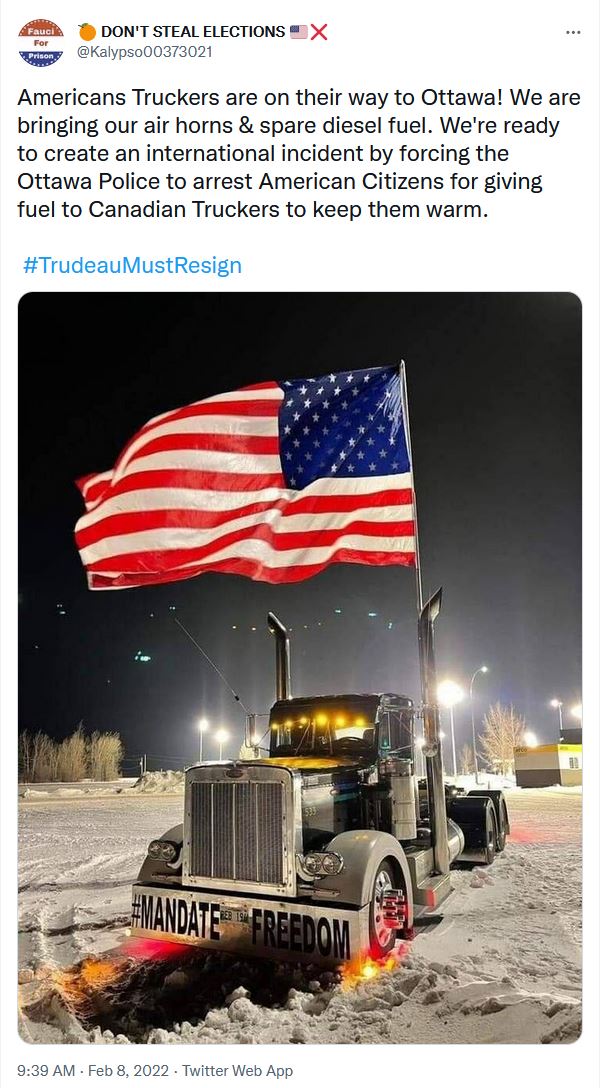 US Truckers are on the way

Meanwhile it appears the Really Big Trucks have arrived:

The miners are sending the monster dump trucks.

This bridge carries 25% of the trade between the US and Canada and about 14,000 vehicles a day.

A trucking convoy has blockaded the Ambassador Bridge that connects Detroit, Michigan and Windsor, Ontario. The fire rises.#TruckersConvoy2022 pic.twitter.com/0IW8m3Po7v

How long before protests like the ‘Freedom Convoy’ come to America?

Workers of the world unite. You have nothing to lose but your chains.

Karl Marx never spent a moment in a factory. He was a rich kid who became a journalist. Of course he was. But for more than 150 years, Karl Marx inspired generations of other rich kids who also became journalists to repeat his line or variations of it.

…consider what’s happening right now in Canada. Thousands of truck drivers have descended on Ottawa, the capital city, to protest the tyranny of Justin Trudeau’s government. Justin Trudeau does not like truck drivers. He thinks they’re revolting. Justin Trudeau likes private equity barons and tech moguls, the only people who give him money. Trudeau is not in Ottawa right now. In fact, he and his family fled when the truck drivers arrived and they’ve been in hiding ever since. So when the revolution he has been calling for finally arrived, Justin Trudeau wasn’t there to see it. He ran away in terror, kind of sad.

… in his place, his friend Mark Carney has been speaking for him. Carney is a former Goldman Sachs executive who many believe will replace Justin Trudeau if Trudeau ever decides to give up power. In a recent op-ed, Mark Carney vented his rage …””Anyone sending money to the convoy should be in no doubt,” Carney wrote. “You are funding sedition. Foreign funders of an insurrection interfered in our domestic affairs from the start.”  “

Got it? That is not a protest. It’s sedition. It’s an insurrection.

Things may get nasty. There is no sign the Canadian government is going to govern in the spirit of democratic debate and persuasion. There is video of the police in Ottawa manhandling a 78 year old man, aggressively harrassing people, pushing them out of their cars and confiscating legal jerry cans. There are unverified claims that the internet and cell phone coverage are down in all major cities where there are protests. I cannot confirm this on Netblocks or the IP Observatory. That would indeed be cruel, not to mention a bit of a problem for the people of Ottawa and Toronto etc. It may be nothing.

There is also a claim that a suspicious man who appears to be a “Fed” was trying to provoke the protesters to “storm Parliament”.

The protesters however inflating bouncy castles for children. Send in the SWAT team, eh?