One hour away from the Ambassador Bridge inside the US, the trucks are stationary, lined up nose to tail. This was two days ago.

Crazy views in Michigan! This footage is from 2 days ago. Why hasn’t corporate news been showing this? Why haven’t they been talking to the people? pic.twitter.com/Es2vtEmBFB

Remarkable what happens when real people meet real people. This is why the media never allows it.

And for the record, another Canadian drove 11 hours to meet the Truckers and found out they were wonderful people, helping the homeless and nothing like the media said. I’m so angry, he said, about the media.

Imagine how polarised the nation would be (or not) if the public broadcasters interviewed the best spokesmen on both sides of every debate? Instead they just find the views that say what the editor believes, or commit professional suicide, like this Vancouver announcer.

One Canadian DJ ended his radio career by telling his listeners the media were full of lies. “You are being fooled”.

Kit Carson a DJ for Z93.5 a radio station in Canada comes clean about the lies, media manipulation, and propaganda in mainstream media. https://t.co/yTYxzGh7GT

Carson also accused the news media of lying about the protest, and suggested they were doing so on behalf of Prime Minister Justin Trudeau. He did not respond to an interview request from CTV News.

In Paris, armored vehicles are coming in, in preparation for the French Convoy

Isn’t this newsworthy? SBS News in Australia told me tonight at length how one region of India was considering banning the Hijab, but they didn’t mention that the French government was preparing for the arrival of French protesters with military force.

Macron has been dealing with Yellow Vest Protests now since 2018. The last thing he wants is for the Yellow Vests to come in trucks. 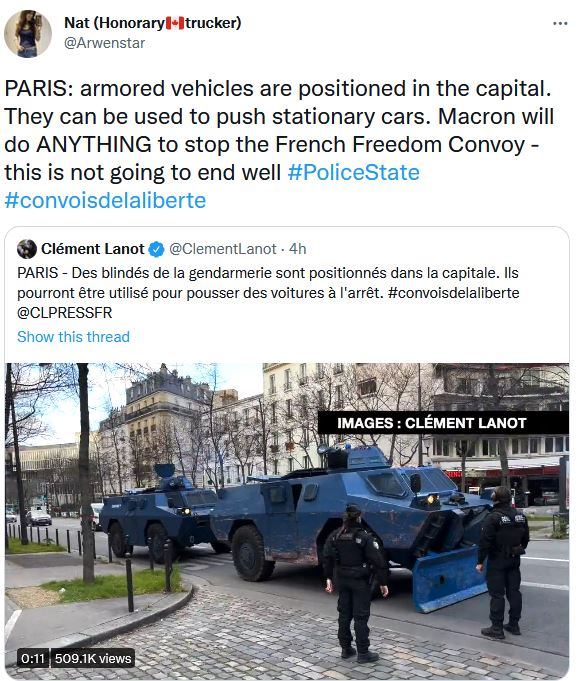 RedPill the Nation.  Everyday is another chance. Friends let friends know that the media is not telling them the news…

There are rumors the Premier of Ontario will end vaccine passports. Rebel News has a copy of a recording of him talking to supporters to forewarn them. “We’re pulling these passports. We’re going to get back to normal. I can’t get you the exact date”…

Nothing to do with the Truckers of course.

Trudeau isn’t backing down yet. But Ottawa police tried to threaten the Truckers, saying:

“… they could be arrested without warning if they persist with the occupation of the city’s downtown core. Referencing the crime called “mischief to property,” the message said if the demonstrators don’t stop blocking city streets they could be arrested, charged, and have their vehicles seized and possibly forfeited.

The convoy organizer Chris Barber would have none of it:

“We replace every driver arrested with three new drivers,” he wrote. “Call just went out.”

…New Jersey’s governor seemed to be ready to throw in the towel and stop fighting public sentiment on the issue. Well, shortly after that, the push to put an end to the mandates appeared to start spreading faster than the Omicron variant. Three more blue state governors joined Phil Murphy in saying that mandates would be coming to an end either this month or in March. Oregon, Connecticut, and Delaware jumped on the bandwagon…

In the UK, the Department of Health and Social Care wants to know what people think about revoking vaccine jab for job policies:

…the view of this government is that it is no longer proportionate to require vaccination as a condition of deployment through statute in health, care homes or other social care settings.