With an energy crisis hitting the Northern Hemisphere and China streaking ahead, an atomic renaissance is brewing.

The UK is putting more into new nuclear power. France has flipped from shrinking nukes to growing them. The Netherlands had changed its tune. The EU has quietly drafted rules allowing nuclear power to count as “green”.

There are 443 Nuclear Power plants in the world. Another 54 plants are under construction, and more than a third of those are in China. Right now China has about half the capacity of the USA, but within five or ten years China will be the largest nuclear power in the world.

Australia has one third of the world’s known uranium, but has no nuclear power. Why don’t the Coalition do something a tiny bit brave and do what 32 other countries already do. 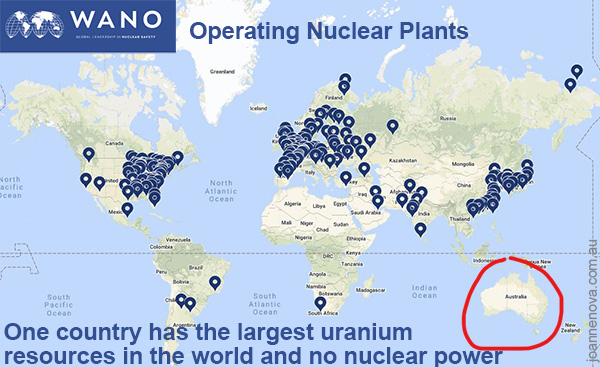 There is no reason under the sun that the nation with the world’s uranium and the most stable tectonic plates on Earth shouldn’t go nuclear.  We’re getting the subs, why not the power?

Nuclear Ban Has To Go

It should be obvious nuclear is no longer toxic for other democracies yet Australia, alone among G20 nations, maintains an outright ban despite sitting on one of the largest uranium reserves.

France late last year reversed a decision to cut its dependence on nuclear energy from 75 per cent to 50 per cent, announcing €30bn ($47.7bn) for six new reactors. The EU looks set to designate gas and nuclear power as “green energy”.

The Netherlands has allocated €500m to extend and upgrade nuclear capacity to 2025. “Nuclear energy can complement solar, wind and geothermal energy in the energy mix, and can be used to produce hydrogen,” the Dutch government said in December. “It also makes us less dependent on gas imports.”

Germany’s decision to phase out its nuclear reactors is looking increasingly foolish, tying its hands in a looming showdown between NATO and Russia over Ukraine’s future.