German newspaper Handelsblatt reported that an internal email from Volkswagen USA stated that the ship was carrying 3,965 vehicles of the VW, Porsche, Audi and Lamborghini brands.

It’s not clear if the fire started in an EV battery but once the flames got into them, the ship was abandoned to burn.

According to a study done in 2013 by the German Federal Ministry of Transport, Building, and Urban Development, the batteries burn extremely hot and produce noxious gases.

“In the event of a lithium ion battery catching fire, it is important to note that such a fire reaches very high temperatures, produces toxic gases and is inextinguishable,” the report concluded. — The Independent

Five days later the fire has finally run out of material to consume.

Luxury cars on fire on cargo ships is a thing now 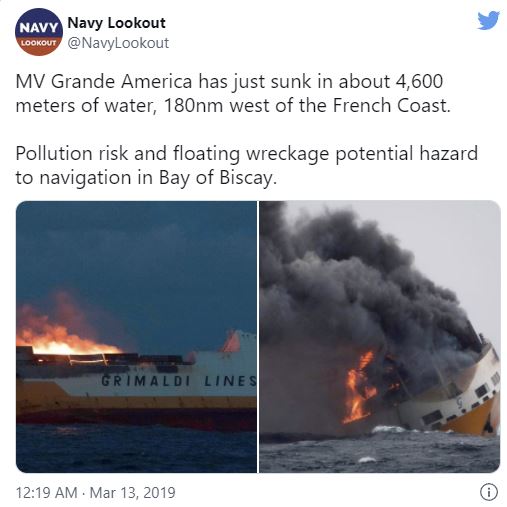 Thankfully, in both cases all 22 and 27 crew members were rescued.

In December 2021, UKP&I Insurance Group prophetically issued a warning  about bulk carriers and the new risks they face with EV’s.

Though  it did not specifically blame EV’s for starting these fires, it listed some recent car carrier fires:

Grande America suffered a fire in March 2018 and subsequently developed a starboard list, causing it to capsize and sink in a depth of around 4,600 metres. The resulting oil spill stretched for 10km and the ship was carrying 2,000 cars and 365 containers, of which 45 were deemed to hold hazardous substances.

Sincerity Ace caught fire in the Pacific on New Year’s Eve 2018 with more than 3,500 cars onboard.  The crew had to abandon the vessel, and whilst 16 crew were rescued, five tragically died as a result of the incident.

In June 2019, Diamond Highway had to be abandoned by its crew in the South China Sea, due to fire, whilst carrying 6,354 cars. Thankfully, all 25 crew were rescued.

PS: For those with time and an inclination, there once was a big ship with 6,000 Mazdas that floundered for weeks. Engineers will appreciate the scale of that salvage job though it did not apparently involve EVs or fires. Somehow the Cougar Ace was saved, but every single car was forensically scrapped.