The Truckers convoy is so much bigger than just rules on a border crossing. And it’s spreading —  hundreds of trucks are gathering on the US Canada border at Alberta. It has become the lightning rod for the disaffected, the put-upon, and the seriously Fed-Up.

Lots of people don’t even know this is happening. This is a chance to Redpill friends. Reach out in emails. Just ask people, “did you hear about this?” Share the message, because the MSM won’t, and the Empire will silence the news and sabotage the protests every way they can.

Socialists Condemn Workers Of The World For Uniting

OTTAWA—Socialists around the world are condemning the trucker freedom protest in Canada as the working class unites to defend their human rights.

“When workers of the world unite against overbearing government mandates, that’s literal fascism,” said a sobbing socialist Prime Minister Justin Trudeau from deep within his top-secret bunker underneath Washington, D.C. “True, compassionate socialism is when the government partners with private corporations to force experimental drugs on the populace and threaten their very livelihoods if they don’t. Everyone knows that.”

The Empire is terrified of the power of Truck protests

They know the Truckers have the power to capture attention. The pushback reveals how just how worried they are.  In Nova Scotia they have banned donations and people joining the protest. They are not even allowed to “park” in such a way as to slow normal traffic and the fines are obscene. Is this even constitutional in Canada?

The order stipulates that “all persons are prohibited from stopping, parking, or operating a vehicle or putting any item in such a manner as to create or contribute to a partial or complete blockade of the normal flow of vehicle traffic on a road, street or highway in the Province”.

Meanwhile Trucks gather at the US-Canada Border in Alberta

US Truckers promised to join their Canadian counterparts. They said they would go to Ottawa, and if they were not allowed to cross the border they would block it.  These drivers (below) will not or cannot show “their papers”.

Trucker protests are not just show stoppers, they’re infectious. Looking in both directions (below), this is one hell of a side protest going on a long way from Ottawa. 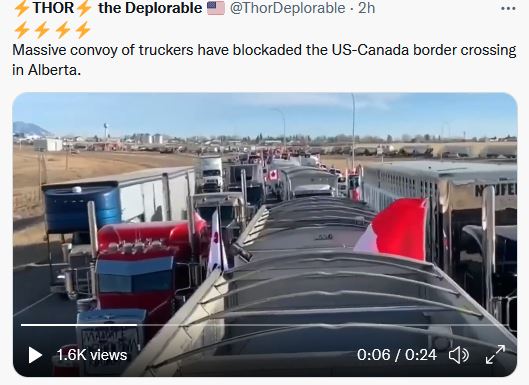 Massive convoy of truckers have blockaded the US-Canada border crossing in Alberta. | 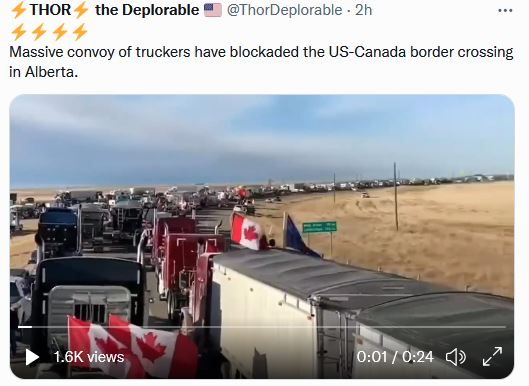 The pushback to make life hard for these truckers is so desperate that reports are coming in suggesting that other people bringing in food to these truckers are being blocked. They are told in the freezing cold of midwinter that they will have to walk  20km (12 miles) to deliver food. Imagine if this were a BLM protest and people were stopping food deliveries?

Where is that Aerial Food Drop when we need one?

UPDATE: This report from Rebel News explains that while the Truckers on the border are being called terrorists who are holding people hostage, the Truckers say they have allowed all who want to leave, to go, and made room for emergency vehicles, but they were denied food, water, medicine and fuel in freezing weather. Rather than them being a threat to anyone else, it was the RCMP who were blockading them in. Snow is falling and some vehicles have run out of propane, some have families with children. But lawyers have arrived to the border to help the truckers who are being charged with offenses while they maintain a peaceful protest.

Meanwhile Trudeau received his booster shot at the beginning of January, but has just caught Covid in his secret hideaway

The effect of the third jab should be peaking about now shouldn’t it?

And the attempts to make out that the protesters are violent vandals continues:

Trudeau slammed the protestors’ actions during a Monday news conference, accusing them of using “hateful rhetoric” and “violence toward fellow citizens.”

“Freedom of expression, assembly, and association are cornerstones of democracy,” he said. “Nazi symbolism, racist imagery and desecration of war memorials are not.”

Police are investigating potential criminal charges against some protestors after reports emerged that some urinated and danced on the National War Memorial. Videos showed a group of protestors dancing on the Tomb of the Unknown Soldier.

“Several criminal investigations are underway in relation to the desecration of the National War Memorial/Terry Fox statue, threatening/illegal/intimidating behavior to police/city workers and other individuals and damage to a city vehicle,” Ottawa police said on social media.

This is what the “desecration” of the Terry Fox statue was — two Canadian flags and a sign that read “Mandate Freedom”: 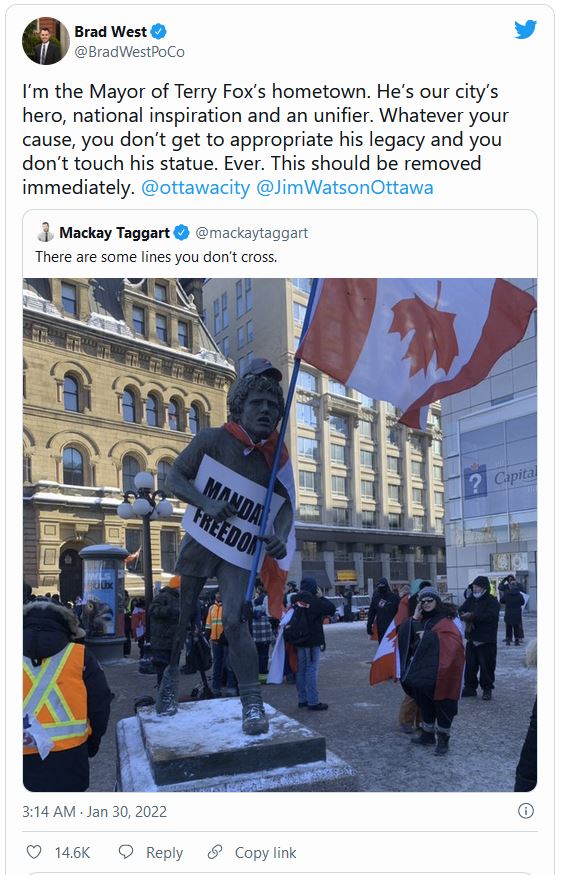 These people don’t know what desecration means. If it were a BLM protest they would have torn it down and dragged it away in chains.

As for the odd Swastika in a sea of Canadian flags, the righteously indignant believe their own “white supremacist” propaganda. They don’t realize the symbol is only used as a comment about Trudeau and his totalitarian regime: 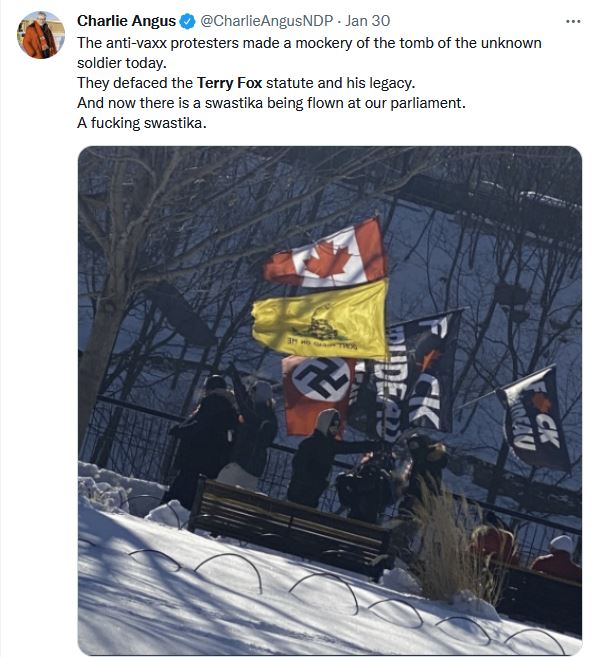 They don’t realize the Swastika is a protest flag and a comment about Trudeau.

Viva Frei spent hours in Ottawa filming today and says he saw “Nothing but freedom loving, tolerant, Beautiful people at that protest.“. “…wouldn’t you know it, Canadian fake news and those blue checkmark Twitter politicians are absolute liars.”

BREAKING: Quebec to scrap proposed “tax” on the unvaxxinated

In a moment of good news, the protests have at least won a small concession in madhouse Quebec where it looks like it will scrap a planned “health” tax on the unvaccinated.  Unfortunately at the moment,  unvaxxinated people must still be escorted through department stores by staff to buy aspirin at Walmarts without stopping to get socks.

Spare a thought for this historic event — Canada is now #Truckistan 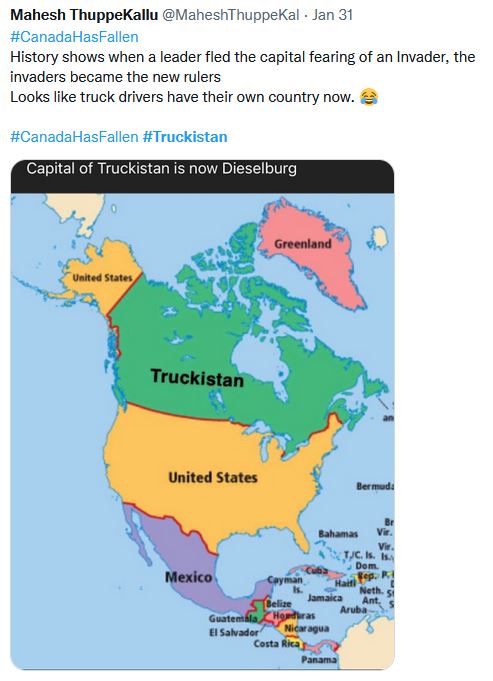 It doesn’t matter what tactics they use, the truckers aren’t leaving…and more are waiting to get in.

The GoFundME stands at $9.6m. But there are a lot of Trucker GoFundMe’s?  See  also #FreedomConvoy2022 for news.