It’s a miracle. Common sense.  For the first time in two years government rules are shrinking.

A lot of this is thanks to Omicron, the gift from Africa.

In terms of infections the UK is past the peak, but most of Europe is a viral Firestorm. France just recorded a half a million new Covid cases in a single day, and with a test positivity of 31% awesome percent. Something like 1 – 3% of the entire French nation caught Covid yesterday. 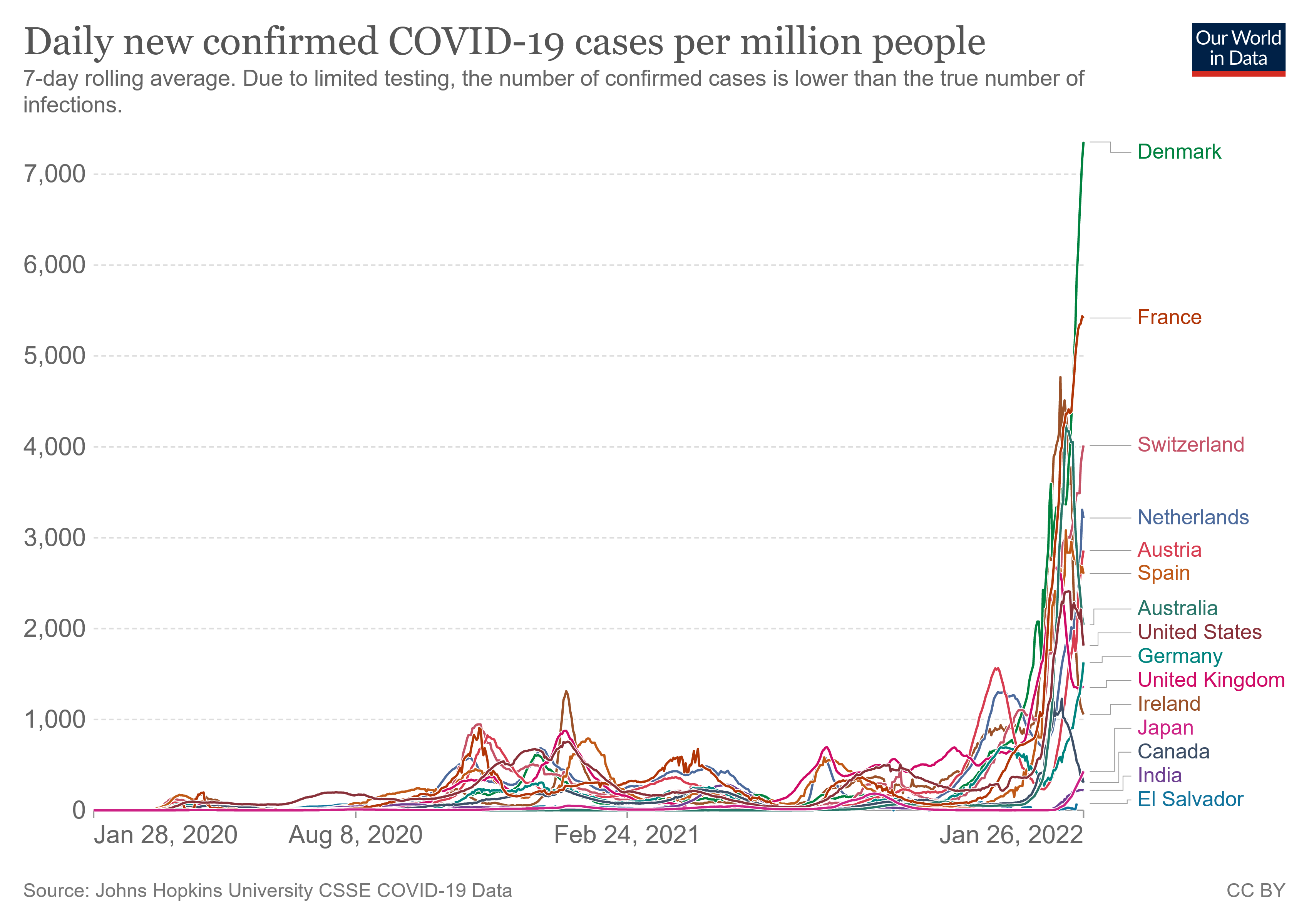 All the past awful waves shrink before Omicron.   | Source OWID

Despite the bonfire of cases, the deaths are lower than any wave:

A glorious contrast in graphs: 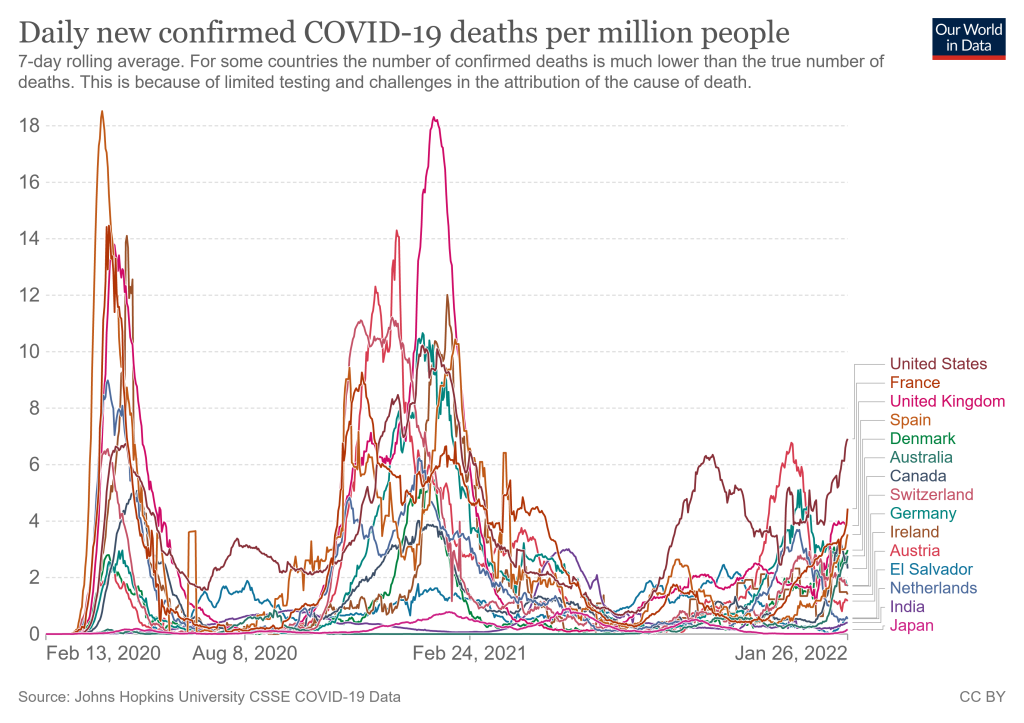 With the disaster averted in the hospitals, suddenly political leaders are changing tune. We might think this is all just thanks to the magic of Omicronic nicety, but cases are still rising in places like Denmark and France and yet the Governments are already pulling back. That’s surely thanks to the pressure of mass protests. Without that pain and anger, political leaders wouldn’t be acting so early.

Though it helps that millions of people are catching Omicron and know first-hand that it just doesn’t make sense to force people to get vaccinated.

There’s a wave of mandates disappearing

Vaccine passports were wound back in England last week.  But 80,000 Doctors, dentists and nurses still face losing their jobs next week due to vaccine requirements for them. It’s about 5% of total healthcare staff. There are many rumours the UK government is considering postponing it.

The US Supreme Court threw out Joe Biden’s illegal mandates for not just private but federal employees, but not before 98% of employees were cajoled, coerced or tricked into getting vaccinated.

And suddenly other countries are winding back the rules.

Ireland to End Most COVID-19 Restrictions, Including COVID Passport

From 6 a.m. on Saturday, COVID certificates, which are currently required as proof of vaccination or recovery to access indoor hospitality venues, cinemas, theatres, gyms, and leisure centres, will be scrapped.

Bolivians blocked the roads in protest, and the mandates ended:

ANTA CRUZ, Bolivia—On Jan. 19 the administration of socialist President Luis Arce canceled the requirement of proof of vaccination against the CCP (Chinese Communist Party) virus to enter any public establishment or place of commerce.

The Movement for Socialism (MAS) party officials announced the original “supreme decrees” 4640 and 4641 on Dec. 28, which triggered nationwide protests and legal backlash in the cities of Santa Cruz, La Paz, Cochabamba, El Alto, and Sucre.

On Jan. 17 protesters established road blockades leading from the city of El Alto into the capital La Paz. The head of the rural magisterium in La Paz, Rudy Callisaya, said the blocks would stay in 20 provinces in La Paz department until the government agreed to dismiss the vaccine decrees. The roads Callisaya pledged to impede with other protesters are a vital part of the supply chain allowing food and essential goods to arrive at La Paz.

No more mandates in The Czech Republic:

The Czech Republic charts its own path on Covid

The new Czech government has pledged to undo the previous regime’s vaccine mandate for over-60s and selected professions in spite of the fact that the Czech Republic has lower levels of vaccination than Austria and Germany. Health Minister Vlastimil Válek has assured people that they “do not have to worry about sanctions” resulting from their vaccination status.

Denmark is to lift all remaining COVID-19 restrictions, with Omicron hospital admissions and deaths remaining stable and high rates of vaccination.

“Tonight we can … find the smile again. We have incredibly good news, we can now remove the last coronavirus restrictions in Denmark,” Prime Minister Mette Frederiksen said at a press conference, following recommendations from the Epidemic Commission and with all the main political parties’ support. The last restrictions will be dropped on February 1.

The announcement comes as a new subvariant of Omicron, BA.2, is gaining a foothold in Denmark and driving infections up, with 46,000 new COVID-19 cases recorded on Wednesday.

On the other hand –Netherlands, France lift restrictions, but still have a “Covid pass”

Dutch bars, restaurants and museums were allowed to reopen on Wednesday…Cafes, bars and restaurants closed since mid-December can now reopen with reduced capacity and until 10pm as long as customers have a Covid pass…

France on Tuesday reported a new daily record of 501,635 new cases but, again, while hospital admissions have risen, only about half as many patients are in intensive care as during previous waves, and the number has been falling since 12 January.

Austria still has one of the strongest vaccine punishment regimes in the world, from mid-March a new law will see the unvaccinated subjected to fines of up to €3,600 (£2,994). At the moment this would apply to an astonishing 28% of the population.

At least, this week the government announced it would let the unvaccinated out of their homes. They have been locked down since last November and could only leave for work or food. Since those monster fines were only just legislated a week ago, presumably the government needs a bit longer to come up with a facesaving excuse to wind them back too.

Germany is debating whether to mandate vaccination

The threats to force vaccinations on all adults have been discussed in Germany for months but are only just being debated in parliament now. There are accusations from the Opposition leader that Schols hasn’t even produced his own legislation yet. It sounds like a bit of a go-slow.

But Germany will crack down on Covid protesters wearing yellow star badges with the words “unvaccinated” printed on them.

Police in the German capital have been instructed to document, remove and confiscate the yellow star badges, which some German vaccine sceptics have taken to wearing with the superimposed words “ungeimpft” (“unvaccinated”) in order to draw a parallel between modern governments’ treatment of those who decline to take a jab against Covid-19 and the systematic stigmatisation of Jewish citizens in the Nazi era.

The police’s internal memo clarifies that wearing the blue and white Star of David, classified as a purely religious symbol, remains legal at demonstrations.

Phew. There’s no free speech in Germany, but at least Jews can still wear the Star of David, as long as the police officer knows what it is.