Why does “seven years” suddenly matter?

“The past 7 years have been the hottest on record

“by a clear margin,” scientists say”

Since when do we do climate analysis on seven year periods? — Since climate scientists get rewarded for scaring taxpayers and “seven” is this years lucky number.

In climate “science” there are always a thousand combinations and permutations of climate records to pick from, so it’s a snap to find one that sings. If it wasn’t the hottest year in 2021, it might have been the hottest global summer, warmest winter, driest spring, or stormiest “on record”. And if temperatures stop rising, the hottest year record stretches elastically into the hottest 2-years, 3-years and 5 years-on-record.

Scientifically, the climate interval that matters most is whatever it has to be to stretch out and sing “Bingo” — “The Met Bureau needs more money.”

Naturally all Climate Bingo games are boosted by inexplicable adjustments, badly placed thermometers, shrinking thermometer screens, and the process of constantly rewriting history. If the incinerators near thermometers don’t do it, the homogenization will. They might be Australian tricks, but most Met Bureaus are the same.

Remember the shocking heat of 1998 — the UAH satellites still do, but all the other temperature sets have erased it. 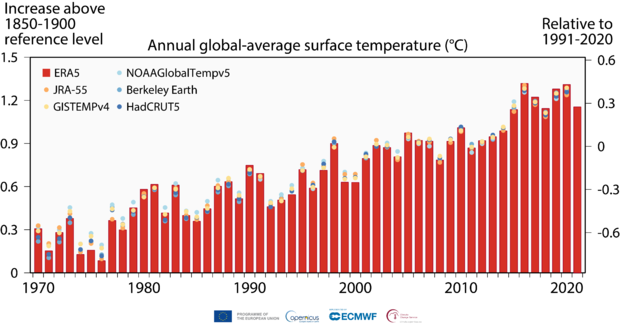 It also helps that most of history has been wiped out

The collective amnesia at Met Bureaus doesn’t just include days like the hottest day ever recorded in Australia in modern equipment (which was 51.7C in Bourke in 1909). They also erase the longest hottest summer at Marble Bar too. The Met Bureaus also forget the Medieval warm period, the Romans, Minoans, and the whole damn Holocene. They forget the Eemian, Aveley, Holstein and Hoxnian interglacials and most of the last half billion years of records, almost all of which were hotter than the hottest parts of the Holocene, which was hotter than 2021.

Two can play Climate Bingo. In the history of human civilization we’ve never lived through six centuries that were colder than the last six. Maybe that’s more important than a 7 year hot record in the “blip” at the end?

The blip of modern warming is higher than the graph shows (which ends in 1855). Things might be the same temperature now as a thousand year ago. But all the records we set today are nothing in the big scheme…

UPDATE: See how serious the global warming has been in Greenland since that ice core ended in 1855, the total rise since then is 2C, which has almost entirely occurred by 1880. The effect of CO2 since 1880 has been almost nothing in Greenland.

Read all the posts on the Bureau of Met