Something is going very wrong. Insurers are paying out on more long and short disability claims, which we might expect in a pandemic, but in the 18 – 64 age group in Indiana deaths are up by wildly exotic sigma deviations above the norm.

(The Center Square) – The head of Indianapolis-based insurance company OneAmerica said the death rate is up a stunning 40% from pre-pandemic levels among working-age people.

“We are seeing, right now, the highest death rates we have seen in the history of this business – not just at OneAmerica,” the company’s CEO Scott Davison said during an online news conference this week. “The data is consistent across every player in that business.”

Davison said the increase in deaths represents “huge, huge numbers,” and that’s it’s not elderly people who are dying, but “primarily working-age people 18 to 64” who are the employees of companies that have group life insurance plans through OneAmerica.

“And what we saw just in third quarter, we’re seeing it continue into fourth quarter, is that death rates are up 40% over what they were pre-pandemic,” he said.

The President of the Indiana Hospital Association confirmed that hospitals across the state were full of patients with “many different conditions” and that what Davison was reporting fitted with what he was seeing too. About 37% of the ICU beds were filled with Covid patients, but 54% were other conditions.

Davison is talking about deaths in the third and fourth quarter of 2021. He compares the current wave to the peak in winter the year before. But official cases of Covid in Indiana were slightly higher in 2020 than most of 2021.

Official deaths were also lower in 2021, so unexplained deaths due to Covid should also be lower now than the year before, not higher.

So imagine for some mysterious reason, that Indiana hospitals got very slack, and were testing less in 2021. If that were the case, and they were missing Covid infections we’d expect test positivity would be higher — but it wasn’t (at least until until Omicron blew it away in the last week).

Which leaves one new medical intervention that peaked in 2021. 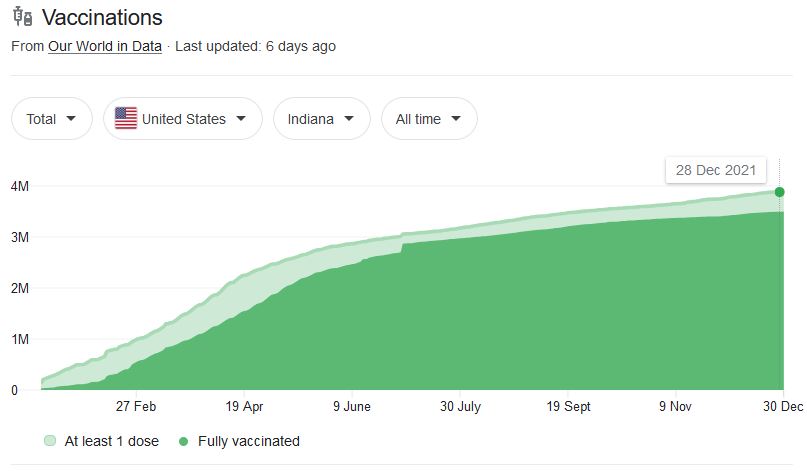 Vaccinations in Indiana were mostly rolled out from Feb to December.

It would be interesting to know which weeks Covid vaccines were rolled out for particular age groups and if the extra deaths in each age group were linked, like they so obviously were in the UK as shown by Neil and Fenton: Many deaths in vaccinated people were recorded as “unvaccinated” in the UK.

If the Indiana Health Department was really interested in the health of people in Indiana it would already have done that study.

There is going to be hell to pay when people find out.