Spread the word. The legacy corporate media are not telling the world about the biggest Truck Convoy in history. People in cars have joined in, farmers in tractors are lining up. People are baking cupcakes and organising food for the drivers. A few hours ago it was a freezing cold midwinter night but throngs were cheering and tooting around Parliament Hill and the streets nearby were in gridlock. Three or four blocks away from Parliament Hill people are tooting in queues of cars, cheering on the Truckers.

Justin Trudeau has tested negative to Covid but has fled Ottawa for a secret location for “fear of violence” and to self isolate with his family. He’s called it a “small fringe minority” expressing “unacceptable views”, and the protesters have taken on the small fringe minority label in placards.

The Empire strikes back

Ezra Levant is on the scene and reporting that officials are going to extreme lengths (as I said they would) to stop the Convoy — they are blocking roads near Parliament Hill with police cars and graders. They have turned off traffic cameras that normally run 24/7 so that people cannot see what is going on.  Apparently they allowed “some trucks” into the centre but are banning the others. (Great way to manipulate the shots to show a “small protest”.)

Nova Scotia has banned people standing on roadsides cheering for the Truckers. So much for free speech! They have allowed some trucks in but are blocking the rest, presumably so they can get shots of a “small protest”. The lies to defend the Empire never end. Someone on Canadian State Media, CBC, is even blaming the Russians.

“Fear of Violence”: Easy way to sabotage any protest

The Washington Post and Trudeau are already labeling this as “far right” and potentially violent. The Truckers have gone out of their way to insist the protest is peaceful. There is a real risk here that this protest could be turned against the protesters just as the unarmed January 6 Capitol Hill protest was. Is a another false flag type incident on the cards? Who knows, but it would serve the autocrats if it happened, wouldn’t it? It would be used to discredit all the upstanding hardworking citizens just asking the government to let them choose their own medical treatment. Another fake insurrection. Another Reichstag fire?

Truck protests appear to be popping up now in  other countries but they are hard to confirm:

See Germany, Brazil, Australia. In Australia, #ConvoytoCanberra has begun. CraigKellyMP will be at PheasantsNest tomorrow at 7am. There are a lot of things stacked against this — we don’t have the same trigger point of new border truck restrictions like Canada does. But we have plenty to protest about. Will it take off? See #AustralianTruckers There are convoys on the road in Wyong and in Queensland/ 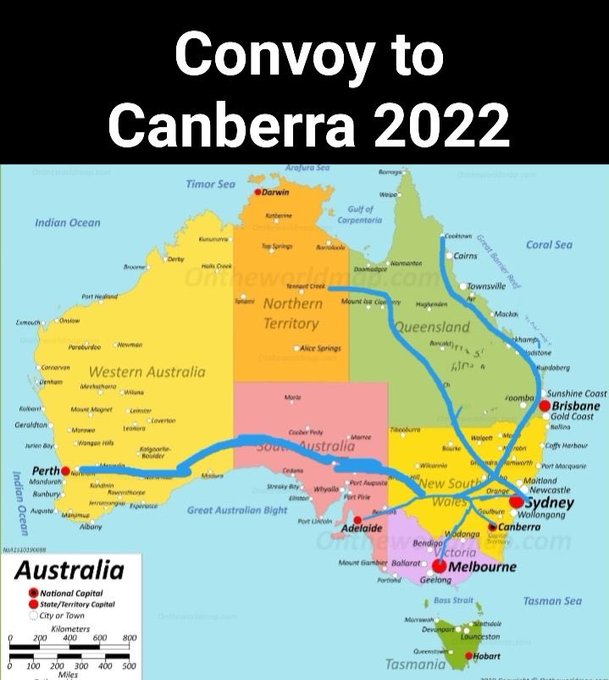 Map of Australian Truckers for Freedom