The Biden family scored $31 million from five deals in China, all with individuals who had ties to the Chinese spy apparatus. All the details are written up by Peter Schweizer in  Red-Handed: How American Elites Get Rich Helping China Win.

The US media spent years obsessing with Russiagate which amounted to nothing while ignoring the bulk carrier load of suspicious deals that connected the son of the then Vice President of the USA to the highest level of Chinese Intel. These businessmen were people like the former head of the Ministry of State Security and the head of foreign intelligence recruitment. Millions of dollars changed hands but no one can easily point to particular goods or services that were received.

The burial of the Hunter Biden Laptop-from-hell in the three weeks before the US 2020 Election was the first seismographic warning that major cracks were spreading through the bedrock of Western Civilization. We expected the media to lie and cheat and be shamelessly, insufferably biased, but it was so much worse.

Schweizer then, has done the job the Western media won’t. He calls this the “scariest investigation I’ve ever done”.

How could Big-Science be 100% dependent on Big-Crooked-Government and not become the same corrupt machine that steers it? 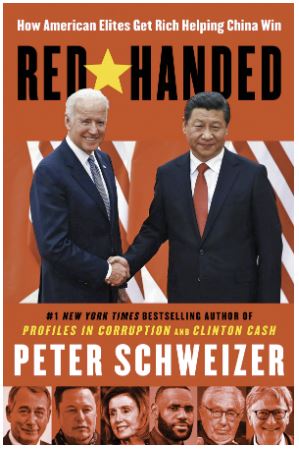 ..Red-Handed has just been released.

BOMBSHELL Book on the Bidens

“The hazard of a Chinese businessman with close ties to the top ranks of Beijing’s spy agency conducting financial transactions with the son of the U.S. vice president cannot be overstated. How this did not set off national security or ethics alarm bells in Washington is a wonder in itself,” Schweizer writes in Red-Handed.

Another partner the Bidens were introduced to via “The Super Chairman” is Zhao Xuejun (aka Henry Zhao), who formed Harvest Fund Management. Zhao was the chairman and Chinese Communist Party general secretary at the firm.

Zhao had another company called “Harvest Global Investments,” which he co-founded with Jia Liqing, the daughter-in-law of a member of the Politburo Standing Committee at the time… “There is no one more powerful in the world of Chinese intelligence,” Schweizer writes. “The seductive and lucrative deal that Hunter was now putting into place, creating BHR, involved two financiers with ties to the highest levels of Chinese intelligence,

In the infamous “Laptop From Hell,” a 2019 text was recovered from Hunter Biden to his daughter Naomi, where he writes, “I hope you all can do what I did and pay for everything for this entire family for 30 years … It’s really hard. But don’t worry, unlike Pop, I won’t make you give me half your salary.”

And where were the FBI?

They were too busy hiding Hunters Lap top from American voters.

From an interview with Laura Ingraham

“Imagine if we were talking about relationships to Big Oil or Big Tech, the media would be all over this. ” The reason they don’t want to deal with China is a strategy called Elite Capture.

What Beijing want to do is decapitate the leadership in the United States by striking these lucrative deals.

Hunter Biden and Joe Biden’s finances are intertwined. They are not separate entities. There are hundreds of examples where Hunter Biden is paying bills for Joe Biden, which is not legal. He is subsidizing Joe Biden’s lifestyle…

Peter Schweizer is a Breitbart News senior contributor. He also exposed Mitch McConnell’s ties with China  — This time last year it was chilling to see how deeply corrupt those connections were, hidden in plain view, officially declared, yet never mentioned in the news.

Mitch McConnell is the powerbroker of the US Senate, but he’s also a guy whose in-laws own a major shipping company that buys container ships from a Chinese Government company. The in-laws make money from carrying goods back and forward in deals with Chinese State Owned companies.

His wife, by the way, was also The Transportation Secretary of the US Government (!). Her sister sits on the Board of Directors of the Communist Chinese government’s Bank of China.